Pesticide Production Leaves a Legacy of Poisoning and Contamination

(Beyond Pesticides, June 30, 2014) Decades later there are still horrifying impacts from a legacy of dumping in the environment tens of thousands of pounds of chemical waste used in the production of pesticides. The production Â by the Hooker Chemical Company of C-56, the progenitor of many now banned organochlorine pesticides, has resulted in contamination and hardship. Beyond Pesticides has long advocated for the elimination of hazardous synthetic pesticides, due to unnecessary risks that put the health of both people and entire communities in jeopardy. 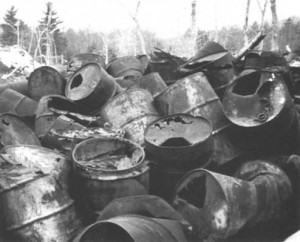 Long after the Depression Era in Montague, MI, there were still many families who were left jobless and looking for any means to bring back a better life. The town decided to stimulate the local economy by recruiting Hooker Electrochemical Company; a chemical manufacturer originally based in New York, where it had been using an old canal bed for disposal of waste in the 1940s and was looking for a new site to build a chlor-alkali plant. Ninety-six percent of local residents signed the petition to bring them in. The situation was perfect for Hooker, which needed the vast underground reserves of salt and the lake water in the town for cooling during its industrial pesticide manufacturing processes. According to a local attorney, Winton Dahlstrom, â€śHooker had been welcomed into the community because as individuals they were well-educated, well-spoken and nobody at the time had any idea what the attitude of industry was toward our natural environment.”

In the 1980s, three individuals, Marjory Erdman, Beth Manchesky and Kristy Anderson, all from Montague, MI had formed a friendship at very early age, and had grown up, got married and started families, remaining very close. One day in 2010 they were all having lunch together and it was discovered each one had a deadly disease that was predicted to cut their lives short. Kristy had a rare sarcoma, Beth had a rare form of mantle cell lymphoma, and Marjory had developed a rare cancer in her uterus. They all had one thing in common, living in the same town that had a history of industrial pollution. However, they found, they were not the only ones having these problems. Many other longtime residents can list their family members and friends with similar health problems as well. Sadly, this affected a boy, Zachary Peterson, Â who was only 15 years old and diagnosed with a rare hepatocellular carcinoma (liver cancer), which usually affects men in their 50’s whose liver is damaged.

â€śThere is a good chance itâ€™s from the environment â€ťâ€ť that either the water or the air or something in our environment (contributed),â€ť said Zachary’s father. â€śBut how do you prove it?â€ť

A couple years back, Claire Schlaff took it upon herself to answer this question. After the death of her son at age 35, she began to collect information that would possibly help answer some of the questions that arose within the community. Along with a few volunteers, they began the White Lake Cancer Mapping Project, which collected information on people who lived in the area and who had been diagnosed or died from cancer. With the information collected, they were able to track the cases over time and establish a pattern. She had to often deliver bad news to those looking for closure and links between the environment and the death of a loved one. â€śItâ€™s very difficult when youâ€™re talking about exposure to chemicals in the environment and proving they have caused any individual illness,â€ť she said. â€śThere are lots of reasons, starting with the people. Every person comes to the table with different hereditary genetics and disposition to disease. While you can have a group of people exposed to a chemical, all at the same level and same time, each person will react differently.â€ť

Another individual during the late 1970s to the early 1980s, James Truchan, was given the task of investigating the company. He became convinced that the issues could be directly related to the chemical compound C-56. â€śC-56 as a compound is extremely toxic,â€ť he said. â€śItâ€™s extremely mutagenic and itâ€™s also fetotoxic. Itâ€™s extremely bad stuff. My only hope is that people exposed to it donâ€™t have some kind of detrimental health effects down the road from it 20, 30 or 40 years from now.â€ť (Compound 56) C-56, also known as hexachlorocyclopentadiene, is an organochlorine compound from which many now banned pesticides, including DDT, methoxychlor, dieldrin, chlordane, toxaphene, mirex, kepone, lindane, and benzene hexachloride which are derived and produced.

resistant to degradation. Organochlorines Â are of Â particular concern to Â human and environmental health because they are highly fat soluble and bioaccumulate throughout the food chain. In 2011, a study was published in the journal Pediatrics, in which researchers suggest that the changes in infants sizes at birth are due to the chemicalsâ€™ interference with hormones of the thyroid, a part of the endocrine system that regulates growth and development.

Lindane, another organochlorine still registered for use as an anti-lice shampoo in the U.S., has been banned in California and is under consideration for severe restrictions in the Michigan Senate. Beyond Pesticides and public health advocates continue to call for a complete phase-out remaining organochlorine chemicals given evidence of their persistence and harmful effects on health and the environment.

A key element of the Organic Foods Production Act (OFPA), which provides the statutory foundation for the USDA organic food label, is an evaluation of the production processes associated with inputs allowed to be used in organic production and processing. Â Situations like the poisoning and contamination of Montague, MI Â by a chemical company producing chemicals used in pesticides or other processing/production aids provides the basis for OFPA’s statutory requirement that Â any synthetic material allowed to be used in the organic production or processing of organic food must be evaluated to ensure that it does not adversely affect health or the environment. The story of Montague frames a key aspect of the organic law, distinct from any other food safety law. Compliance with organic law offers a response to polluting practices, but there is tremendous pressure coming from USDA and the Organic Trade Association Â to weaken the rigor with which synthetic materials are reviewed and, therefore, the integrity of the organic food label. Please see Beyond Pesticides’ Save Our Organic campaign and learn what you can do and more about the details.

This entry was posted on Monday, June 30th, 2014 at 12:01 am and is filed under Agriculture, Alternatives/Organics, Cancer, Chemicals, Disease/Health Effects, Endosulfan, Lindane, Michigan, State/Local, Take Action, Water. You can follow any responses to this entry through the RSS 2.0 feed. You can skip to the end and leave a response. Pinging is currently not allowed.