(Beyond Pesticides, February 9, 2017) The failure of the U.S. pesticide regulatory system to protect marijuana users was highlighted as Health Canada announced Tuesday that it would begin conducting random pesticide residue testing of marijuana products to ensure that only registered products are being used in medical marijuana production. This comes on the heels of voluntary recalls in 2016 by two licensed Canadian cannabis producers due to the presence of the prohibited pesticides bifenazate, myclobutanil, and pyrethrins in or on marijuana products. Especially concerning is the detection of myclobutanil, a powerful fungicide that, when heated, converts to the hazardous gas hydrogen cyanide. The detection of these toxic chemicals in medical marijuana products is distressing since many users have compromised immune systems or health conditions that make them more susceptible to toxic chemicals.

Moves by several states in the U.S. to curb illegal pesticide use in marijuana contain significant pitfalls and loopholes that allow contaminated cannabis to enter the market, where it threatens public health. Without examination of residues in inhaled, ingested, or absorbed cannabis, the userâ€™s health is not protected by pesticide registration addressing other uses. In addition, environmental impacts associated with growing practices are generally ignored. 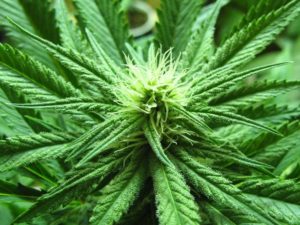 According to Health Canada, as of February 1, 2017, there are â€ś13 registered pesticides approved by Pest Management Regulatory Agency for use on cannabis (marijuana) that is produced commercially indoors.â€ť These include multiple insecticidal soaps, biological fungicides, and mycoinsecticides, or insecticides containing live fungi.

The issue of cannabis contamination is extremely timely considering that in November 2016, medical marijuana initiatives were approved in a. As states continue to legalize the production of marijuana for medical and recreational purposes, regulations governing its cultivation may allow the application of pesticides untested for use in the plantâ€™s production, raising safety issues for patients and consumers. In the absence of federal regulations governing pesticides in cannabis production, the use of pesticides not registered by EPA and not designated as â€śminimum riskâ€ť is understood to be illegal. However, some states interpret the absence of specific labels to allow toxic pesticides like those found by Health Canada.

Several states, including New Hampshire, Vermont, and Maine, have adopted policies that prohibit all federally registered pesticides â€“that is, those not considered â€śminimum riskâ€ťâ€” in the absence of federal oversight. Other states have taken the position that state policy is unnecessary, since EPA, due to cannabisâ€™s narcotic status by the federal government, has not registered any pesticides for marijuana production, and unregistered pesticide use is illegal. As more states legalize marijuana use, it is crucial that any new growing standards reflect a systems-based organic approach.

AÂ reportÂ on the prevalence of pesticide contamination in the medical cannabis supply chain in California was released this past fall by the company, Steep Hill, a global leader in cannabis testing and analytics. Their results reveal that 84% of samples tested positive for pesticide residues, a number significantly higher than experts had previously expected. The risks from myclobutanil residues on products include exposure to the decomposition products carbon monoxide, hydrogen cyanide, and nitrogen oxides, which form when heated.

While the issue of illegal pesticide use in states with legalized recreational marijuana markets has become an area of concern for consumers and public health groups in recent years, the Steep Hill data is significant in that it looks specifically at the medical marijuana market and the impact pesticide-contaminated marijuana may have on medical marijuana consumers, who are often individuals suffering from chronic disease or illness. A California law intended to address this issue,Â the Medical Marijuana Regulation and Safety Act, was passed in 2015, but its oversight provisions, which include mandatory testing, will not go into effect until 2018, leaving California consumers to fend for themselves when it comes to determining whether their cannabis has been contaminated by pesticides.

Implementing safety measures for cannabis production will ensure the sustainable growth of a new agricultural industry, and lead to the protection of public health. The federal government cannot conduct its normal registration review of pesticides used on cannabis, given the cropâ€™s illegal federal status.

Beyond Pesticides continues to encourage states to take a stronger approach to regulating this industry, so that it blazes an agricultural path protecting its most sensitive at-risk users. Three elements must be passed and enforced in order to do so. They are:
1. A prohibition on the use of federally registered pesticides on cannabis;
2. Allowance of pesticides exempt from federal registration, but not those that are only exempt from tolerances and;
3. Requirements for an organic system plan that focuses on sustainable practices and only minimum risk products as a last resort.

For more information on what states are doing in the face of a hands-off federal policy to assess the dangers of pesticides used in the production of cannabis, read Beyond Pesticidesâ€™ report, Pesticide Use in Marijuana Production: Safety Issues and Sustainable Options.

This entry was posted on Thursday, February 9th, 2017 at 12:00 am and is filed under Agriculture, Alternatives/Organics, Arkansas, Biological Control, California, Cannabis, Chemicals, contamination, Disease/Health Effects, Florida, Massachusetts, Myclobutanil, North Dakota, Pesticide Regulation, Pesticide Residues, Pyrethrin, Respiratory Problems, State/Local. You can follow any responses to this entry through the RSS 2.0 feed. You can skip to the end and leave a response. Pinging is currently not allowed.