(Beyond Pesticides, June 26, 2009) On June 23, 2009, House Energy and Commerce Chairman Henry Waxman and House Agriculture Chairman Collin Peterson reached an agreement to include language in the American Clean Energy and Security Act of 2009 that would put the U.S. Department of Agriculture (USDA) in charge of climate change programs and farmers and other landowners for certain practices. The deal would allow carbon-polluting industries that do not meet the greenhouse gas reduction requirements to buy credits from farmers and other landowners who plant trees, install methane capture systems or practice no-till farming, which is heavily reliant on herbicides and not considered by experts to be an effective carbon sequestration strategy.

The amendment takes oversight of the programs away from the Environmental Protection Agency (EPA), a move considered a major defeat to environmental groups. Environmentalists worry that because the role of the USDA is to promote U.S. agriculture – not to protect the environment or human health, it may fundamentally undermine the effectiveness of a carbon offset program.

But, regardless of who administers the program, many are concerned that at least one of the strategies, herbicide-based no-till farming, just doesnâ€™t work and instead should be replaced in the bill by organic practices, which have been shown to successfully sequester carbon. A 2006 study, â€śTillage and soil carbon sequestration what do we really know?,â€ť led by a USDA Agricultural Research Service (ARS) soil scientist, concludes, â€śThough there are other good reasons to use conservation tillage, evidence that it promotes carbon sequestration is not compelling.â€ť On the other hand, a long-term ARS study finds that organic farming practices build soil better than chemical no-till and have more soil carbon, as well as better crop yields.

While the amendment does not specifically make payments to certified organic farmers or for organic conversion, some of the eligible practices are used by organic farmers and others are problematic, according to an analysis by the National Organic Coalition. The bill explicitly names a number of practices which are â€śa minimum list of what should be eligible for offsets.” These include:

In addition, the amendment would exempt the agricultural sector from greenhouse gas reductions and sidetrack for five years a proposed EPA regulation that requires U.S. ethanol makers responsible for greenhouse gas emissions from conversion of forests and grasslands overseas to cropland.

Aside from the Peterson compromise, there is disagreement in the environmental community over the bill as a whole. Friends of the Earth released a statement saying that Congress is squandering an historic opportunity and points out the big oil and chemical companies like Shell Oil, Dow Chemical and DuPont helped craft the bill. The Center for Biological Diversity released an analysis with the following concerns: greenhouse gas reduction target falls far short of reducing atmospheric carbon dioxide to 350 parts per million; essential Clean Air Act protections are repealed; construction of coal-fired power plants will continue; and, offsets could result in increased greenhouse gas emissions.

Twenty-two other organizations, including Sierra Club, Natural Resources Defense Council, National Wildlife Federation, Defenders of Wildlife and League of Conservation Voters sent a letter to every member of the House of Representatives urging them to support the bill. The groups said, “There are rare moments in American history when the urgency to act is clear, the stakes are high, the costs of inaction are untenable, and the need for courageous leadership is paramount. Now is one of those moments.” Twenty U.S. companies and electric utilities published full-page ads in newspapers calling for the bill’s passage as well.

Background on Agriculture and Climate Change
In general, conventional agricultural practices have contributed to climate change through heavy use of fossil fuels–both directly on the farm and in the manufacturing of pesticides and fertilizers–and through degradation of the soil, which releases carbon. The herbicide use that conventional no-till depend on, is no exception. The adoption of organic methods, particularly no-till organic, is an opportunity for farming both to mitigate agriculture’s contributions to climate change and cope with the effects climate change has had and will have on agriculture. 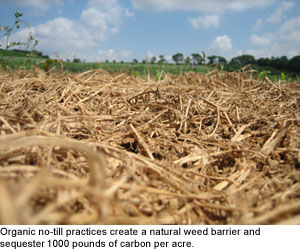 Research from the Rodale Instituteâ€™s Farming Systems Trial (FST) has revealed that organic, regenerative agriculture actually has the potential to lessen the impacts of climate change. This occurs through the drastic reduction in fossil fuel usage to produce the crops (approximately 75% less than conventional agriculture) and the significant increase in carbon sequestration in the soil (approximately 1000 lbs. of carbon per acre). The no-till organic methods they have developed produce comparable yields to conventional systems on average, and higher yields in drought years because of the greater water holding capacity of the organic soils.

The Rodale Institute report, Regenerative Organic Farming: A Solution to Global Warming, calls for federal ag policy to â€śreplace the system of commodity payments with a program that rewards farmers for conservation and other carbon-enhancing farm practices. Farmers should be paid on the basis of how much carbon they can put into and keep in their soil, not only how many bushels of grain they can produce.â€ť

Take action
Urge your Senators and Representative to support organic farming in climate change legislation and beyond. Tell them that incentives for herbicide-intensive no-till farming will not curb climate change. For more information on organic agriculture as a solution to climate change, see Beyond Pesticides Organic Food webpage, the article â€śThe Organic Farming Response to Climate Change” in Pesticides and You and the Rodale Instituteâ€™s Regenerative Organic Farming.

This entry was posted on Friday, June 26th, 2009 at 12:13 am and is filed under Alternatives/Organics, Climate Change, National Politics. You can follow any responses to this entry through the RSS 2.0 feed. You can skip to the end and leave a response. Pinging is currently not allowed.