Lawsuit to Challenge EPA for Pesticide Impacts on Polar Bears

(Beyond Pesticides, July 10, 2009) The Center for Biological Diversity notified the U.S. Environmental Protection Agency (EPA) earlier this week of its intent to file suit against the agency for failing to consider impacts to the polar bear and its Arctic habitat from toxic contamination resulting from pesticide use in the U.S. Pesticides registered by EPA for use in the U.S. are known to be transported to the Arctic via various atmospheric, oceanic, and biotic pathways. Such pesticides are biomagnified with each step higher in the food web, reaching some of their greatest concentrations in polar bears, the apex predators of the Arctic. 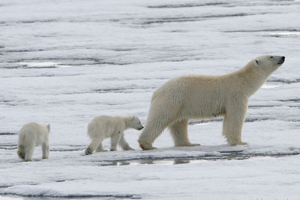 A body of literature demonstrates the far-reaching effects of commonly used pesticides that are suspected endocrine disruptors and persistent organic pollutants, such as atrazine, 2,4-D, lindane, endosulfan, and permethrin, on global ecosystems. These pesticides, among others, and related contaminants have been linked to suppressed immune function, endocrine disruption, abnormalities in reproductive organs, hermaphroditism, and increased cub mortality in polar bears. Human subsistence hunters in the Arctic, who share the top spot on the food web with the polar bear, also face increased risks from exposure to these contaminants.

â€śThe poisoning of the Arctic is a silent crisis that threatens not just the polar bear, but the entire Arctic ecosystem, as well as the people and communities that live within it,â€ť said Rebecca Noblin with the Center for Biological Diversity in Anchorage. â€śBecause the polar bear sits at the top of the food pyramid, if we do what is necessary to protect the bear from pesticides, we will also be protecting the Arctic ecosystem and the people that depend upon it.â€ť

All pesticides in the U.S. must be registered by EPA before they can be lawfully used. Courts have held that the agency must examine the impacts of any pesticide it approves on species protected under the Endangered Species Act. The polar bear was listed as a threatened species under the Endangered Species Act on May 15, 2008 following a petition and litigation by the Center for Biological Diversity, but EPA has yet to examine the impacts of any approved pesticide on the species.

â€śThe United States has lagged far behind the international community in taking action to protect the species and people of the Arctic from contaminants,â€ť said Brendan Cummings, a senior attorney at the Center. â€śBut with the listing of the polar bear under the Endangered Species Act, the EPA now has not just the opportunity but the legal obligation to take meaningful steps to address the poisoning of the Arctic.â€ť

The IUCNâ€™s Polar Bear Specialist Group, comprised of the worldâ€™s leading polar bear scientists, met last week in Copenhagen and highlighted adverse health impacts from contaminants as one of the leading threats to the polar bear in its summary of the meeting. In addition to pesticide contamination and loss of sea-ice habitat from global warming, polar bears face threats from increased oil and gas development in their habitat and the proliferation of shipping routes in an increasingly ice-free Arctic. These activities bring heightened risk of oil spills and rising levels of noise pollution and other kinds of human disturbance.

The Center for Biological Diversityâ€™s 60-day notice of intent to sue is a legally required precursor before a lawsuit can be filed under the Endangered Species Act to compel EPA to comply with the law.

While the action marks the first legal challenge to pesticide registrations due to their impacts on the Arctic, the Center has brought several successful lawsuits against EPA over the impacts of pesticides in the lower 48 states. In 2006 the Center reached a settlement with the agency over the use of 66 pesticides in the habitat of an imperiled amphibian in California, while last week, as a result of a settlement of another Center lawsuit, \EPA proposed restrictions on 74 pesticides due to their impacts on 11 threatened and endangered species in California.

EPAâ€™s response to the impending lawsuit, emailed from EPAâ€™s Mark MacIntyre to the Los Angeles Times states that, â€śEPA takes its responsibilities related to the Endangered Species Act seriously and is evaluating potential risks to threatened and endangered species due to pesticides in a systematic manner as part of its registration review program.”

This entry was posted on Friday, July 10th, 2009 at 12:15 am and is filed under 2,4-D, Atrazine, Chemicals, Endosulfan, Lindane, Litigation, Permethrin, Pesticide Regulation, Wildlife/Endangered Sp.. You can follow any responses to this entry through the RSS 2.0 feed. You can skip to the end and leave a response. Pinging is currently not allowed.