(Beyond Pesticides, July 7, 2009) Utah State University scientists are researching a fungus that eats Mormon crickets (Anabrus simplex) alive by depositing spores inside them that multiply and eventually break through their exoskeletons, according to a July 1, 2009 article in the Herald Journal. While the fungus is already providing an organic method of controlling crickets and grasshoppers in Australia, Africa and South America, exotic species laws prevent people in the U.S. from importing it. Now the USU team is searching near the U.S. border with Mexico, where they believe they will find it.

The research team, led by USU insect pathologist Donald Roberts, PhD, is analyzing 10,000 soil samples gathered by the U.S. Department of Agriculture (USDA) in 17 states. After isolating the various fungi, each is grown in the lab and tested individually on Mormon crickets. Because the Mormon cricket is actually a katydid and more closely related to grasshoppers than crickets, it could be used as an organic control on other unwanted grasshopper species.

The research team warns that while they believe the fungus will not harm fish or mammals, it could harm non-target insects. They also question its effectiveness during huge swarms and admit the fungusâ€™s potency is impacted by weather conditions.

The so-called Mormon cricket is actually a shieldbacked katydid, and not a cricket at all. They are large insects that can grow to almost three inches in length. They live throughout western North America in rangelands dominated by sagebrush and forbs. The Mormon cricket is flightless, but capable of traveling up to two kilometers a day in its swarming phase. It prefers to eat forbs, especially cultivated crops such as alfalfa, and vegetables. The most common chemical control is carbaryl. According to an April 2009 Wall Street Journal article, residents of some small towns have been effectively using boom boxes and sound systems playing loud rock music to divert the moving swarms away from crops and houses, although it is unknown if the result is due to the music or the heavy vibrations.

In 2006, mushroom expert Paul Stamets spoke at Beyond Pesticides National Pesticide Forum in Washington, DC and discussed, among other things, the role fungi can play in controlling insects in the home. Mr. Stamets and his colleagues have been working with fungi that feed on insects, and he has figured out a way to grow fungi that delay their spore formation and actually attract the insect to the fungus, thus breaking through an obstacle in using fungi to protect homes from carpenter ants and termites. However, in doing so, he says his philosophy â€śis not to wage war against the insect kingdom but to enlist fungal allies for the intelligent, natural, and localized control of targeted insects… We seek balance, not extinction.â€ť 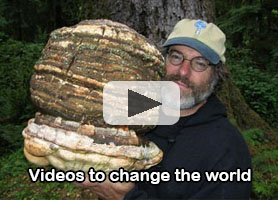 Watch Paul Stametsâ€™s presentation in streaming video and read the article, â€śFungi To The Rescue: Biopesticide derived from mold has promise as a greener method for eradicating unwanted insects,â€ť in the Winter 2007 issue of Pesticides and You.

This entry was posted on Tuesday, July 7th, 2009 at 1:10 am and is filed under Alternatives/Organics. You can follow any responses to this entry through the RSS 2.0 feed. You can skip to the end and leave a response. Pinging is currently not allowed.