(Beyond Pesticides, September 1, 2009) On August 26, 2009, Bayer CropScience announced plans to reduce by 80 percent the storage of methyl isocyanate (MIC), the chemical used in pesticide production that caused the explosion in Bhopal, India and Institute, West Virgina. Two workers were killed in August 2008 when the chemical, an intermediate chemical used in the production of aldicarb, carbaryl, carbofuran, methomyl and other carbamate pesticides, exploded at a Bayer facility in Institute, WV. Thousands died in a Bhopal in 1984.

Advocates point out that even if Bayer follows through with its 80% reduction promise, it would still allow up to 50,000 pounds of MIC to be stored on site. This would be similar to the amount of the chemical present in the 1984 Union Carbide (now owned by Dow Chemical) explosion in Bhopal, India. Last summer, when a pesticide tank exploded in West Virginia, comparisons between the siteâ€™s potential risk and the Bhopal disaster, in which an explosion and leak killed thousands, were drawn. Currently, the U.S. plant has the capacity to store more up to 40,000 pounds of MIC above ground and 200,000 pounds below ground. Bayer says it will eliminate all above ground storage.

Bayer Cropscience has previously rejected calls to eliminate or reduce MIC production. Bill Buckner, Bayer CropScience’s president, said the decision isn’t an admission the plant’s MIC stockpile was unsafe, but is an effort to address continued concerns from the public and local government officials.

Bayer does not plan to rebuild its methomyl unit, where last August’s explosion occurred, however it will buy outside sources of methomyl manufactured in other communities to continue making its Larvin brand pesticide products.

Bayer says it will stop producing MIC by July 2010 for the FMC Corporation to use in making the pesticide carbofuran. Earlier this year, the Environmental Protection Agency (EPA) revoked regulations that permit residues of the pesticide carbofuran in food (tolerances) because the insecticide does not meet current safety standards. The tolerance rule becomes effective December 31, 2009. Environmentalists believe that production beyond the cancellation date is a sign that the manufacturer is fighting the cancellation. It is also possible for FMC to manufacture carbofuran for export after use is banned in the U.S., a practice which is permitted under federal pesticide law. Approximately one-quarter of the pesticides exported by the U.S. are not registered for domestic use or sale.

Bayer will continue to manufacture MIC for production the production of aldicarb and carbaryl (Sevin) indefinitely.

“An 80 percent reduction is a decent good first step in addressing the dangers that exist in the facility and we look forward to seeing more progress,” Maya Nye, a spokeswoman for People Concerned About MIC, told the Charleston Gazette. “The 20 percent that remains will still be capable of causing the amount of damage as happened in Bhopal, so we need to remain vigilant about these dangers that still exist.”

The Chemical Safety and Hazard Investigation Board, a nonregulatory agency, is conducting an investigation into the cause of last yearâ€™s explosion, emergency response coordination, and future prevention measures. However, Bayer has invoked the 2002 federal Maritime Transportation Security Act because its campus is attached to a dock on the Kanawha River, claiming the Act exempts it from sharing â€śsensitive security informationâ€ť due to potential terrorism. Read more about Bayerâ€™s lack of cooperation.

“Any measures by Bayer to reduce the inventory of MIC at the facility are a positive development, provided that the safety and environmental risk is truly mitigated,” John Bresland, chairman of the federal Chemical Safety and Hazard Investigation Board said. “If implemented in a careful and conscientious manner, the steps Bayer has outlined will lessen the risk to the public and the workforce from an uncontrolled release of MIC.” The board plans to release its final report on the accident in 2010. Read the open letter sent by People Concerned About MIC to the Chemical Safety and Hazard Investigation Board.

August 2008 explosion at the Bayer CropScience plant in WV 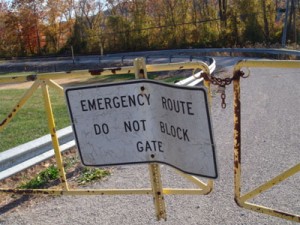 Photo of the gate closing off the Institute community's evacuation route. By Maya Nye, 11/08

Bhopal procedures for an emergency. (Photo by Jay Feldman, Beyond Pesticides)

This entry was posted on Tuesday, September 1st, 2009 at 7:30 am and is filed under Aldicarb, Bayer, Carbaryl, Carbofuran, Chemicals, Corporations, Environmental Justice, Methomyl, State/Local, West Virginia. You can follow any responses to this entry through the RSS 2.0 feed. You can skip to the end and leave a response. Pinging is currently not allowed.