(Beyond Pesticides, October 1, 2009) More pesticides and fertilizers used to grow conventional corn would find their way into nearby water sources if ethanol demands lead to planting more acres in corn, according to a Purdue University study. The study of Indiana water sources finds that fields practicing continuous-corn rotations have higher levels of nitrogen, fungicides and phosphorous than corn-soybean rotations.

While touted as a green energy source, most corn ethanol is made with genetically modified corn that is routinely sprayed with pesticides and chemical fertilizers. To makes matters worse, it’s usually planted year after year, rather than using crop rotation, a basic strategy to reduce pest pressure and soil erosion. Corn ethanol is also inefficient, producing only 1.34 joules of energy for each joule used in production (compared to 8 joules for sugarcane). Furthermore, the American Clean Energy and Security Act (House Climate Bill) sidetracks a proposed EPA regulation that requires U.S. ethanol makers responsible for greenhouse gas emissions from conversion of forests and grasslands overseas to cropland. Big Agribusiness is lobbying for a similar provision in the Senate version, the Clean Energy Jobs and American Power Act. 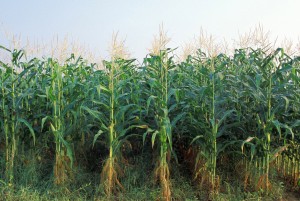 Results of the new study, â€śWater Quality Impacts of Corn Production to Meet Biofuel Demands,â€ť by Indrajeet Chaubey, PhD, an associate professor of agricultural and biological engineering, and Bernard Engel, PhD, a professor and head of agricultural and biological engineering, were published in the online version of The Journal of Environmental Engineering. U.S. Department of Agriculture data has shown that corn acreage has increased with the demand for ethanol, with 93 million acres in 2007, an increase of 12.1 million acres that year.

“When you move from corn-soybean rotations to continuous corn, the sediment losses will be much greater,” Dr. Chaubey said. “Increased sediment losses allow more fungicide and phosphorous to get into the water because they move with sediment.”

Organic agriculture embodies an ecological approach to farming that does not rely on or permit toxic pesticides, chemical fertilizers, genetically modified organisms, antibiotics, sewage sludge, or irradiation. Instead of using these harmful products and practices, organic agriculture utilizes techniques such as cover cropping, crop rotation, and composting to produce healthy soil, prevent pest and disease problems, and grow healthy food and fiber.

Beyond Pesticides supports organic agriculture as effecting good land stewardship and a reduction in hazardous chemical exposures for workers on the farm. The pesticide reform movement, citing pesticide problems associated with chemical agriculture, from groundwater contamination and runoff to drift, views organic as the solution to a serious public health and environmental threat.

According to USDA, in 2009, 85% of corn planted in the U.S. was genetically modified. Cornell University researchers estimate that meeting the lifetime fuel requirements of just one year’s worth of U.S. population growth with straight ethanol (assuming each baby lived 70 years), would cost 52,000 tons of insecticides, 735,000 tons of herbicides, 93 million tons of fertilizer, and the loss of 2 inches of soil from the 12.3 billion acres on which the corn was grown. Growing food for fuel will almost certainly raise global food prices as well.

This entry was posted on Thursday, October 1st, 2009 at 12:40 am and is filed under Alternatives/Organics, Biofuels. You can follow any responses to this entry through the RSS 2.0 feed. You can skip to the end and leave a response. Pinging is currently not allowed.