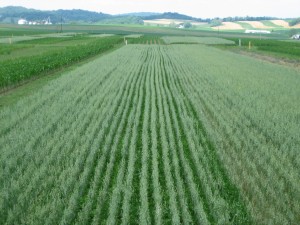 Canada has banned nanotechnology in organic food production. An amendment was added to Canadaâ€™s national organic rules banning nanotechnology as a â€śProhibited Substance or Method.â€ť The section lists substances or techniques that are prohibited in organic food production, including genetic engineering, synthetic pesticides, irradiation, and cloned animals, among others. In the U.S., the Natgional Organic Standards Board (NOSB) heard testimony at its recent meeting on the development of a definition and policy on nanotechnology in organic standards.

Nanotechnology involves the creation and manipulation of materials at the scale of atoms and molecules. Scientists are applying nanotechnology to many industries, including food production. Critics say that too little is known about the impact of nanoparticles on human health and the environment. Dag Falck, organic program manager at Natureâ€™s Path Foods, sponsored the comment banning nanotechnology in organics to the Canadian General Standards Board, which then voted for the ban. According to Mr. Falck, reasons given for the ban on nanotechnology are that consumers are very concerned about the technology, that it is incompatible with organic principles, and that safety aspects of the technology are unknown.

In the U.S., the Materials Handling Committee of the National Organic Standards Board (NOSB) planned last fall to recommend that nanotechnology be banned from organic food production. But in February the committee published a â€śrequest for information for developing a usable definition of the term (nanotechnology) in organics.â€ť The document says â€śa difficulty in developing a definition for the term â€ťËśnanotechnologyâ€™ has prevented the committee from completing a final recommendation on this important issue.â€ť As a result, the committee has requested a technical and scientific review of the issue to aid the committee in clearly identifying the term â€śnanotechnology.â€ť The committee wants to avoid including in the definition products of technologies that are currently allowed in organic production and processing. For example, homogenizing milk and grain milling create nanosized particlesâ€ťâ€ťmilk molecules and wheat flour dustâ€ťâ€ťbut would not be considered products of nanotechnology.

Banning nanotechnology in organic production presents challenges because it is already being used in some organic products. Nano Green Sciences, Inc. sells a nano-pesticide that they claim is â€śorganic.â€ť Other pesticides, such as pyrethrin and copper, could contain nanoparticles and nanosilver could be used to clean vegetables of bacteria. Some personal care products promoted as organic already contain nanoparticles.

Canada joins several other countries that have either banned or proposed a ban on nanotechnology in organic including the United Kingdomâ€™s Soil Association, Biological Farmers of Australia, and Austrian organic certifier Austria Bio Garantie. The US-based Organic Crop Improvement Association has added a clause in their organic standard to regulate the use of nanotechnology.

In 2007, a broad international coalition of 40 consumer, public health, environmental, and labor organizations released the Principles for the Oversight of Nanotechnologies and Nanomaterials, which calls for strong, comprehensive oversight of the new technology and its products, citing risks to the public, workers and the environment. The manufacture of products using nanotechnologyâ€”a powerful platform for manipulating matter at the level of atoms and molecules in order to alter propertiesâ€”has exploded in recent years. Hundreds of consumer products incorporating nanomaterials are now on the market, including cosmetics, sunscreens, sporting goods, clothing, electronics, baby and infant products, and food and food packaging. But evidence indicates that current nanomaterials can pose significant health, safety, and environmental hazards. In addition, the profound social, economic, and ethical challenges posed by nano-scale technologies have yet to be addressed. Nanosized particles such as nanosilver can be released from impregnated materials via washing or sweating where they may pose numerable unknown adverse effects to humans and water systems.

Tell the NOSB to keep nanotechnology out of organic production and processing. See sample letter.

Source: The Organic and Non-GMO Report

This entry was posted on Wednesday, May 5th, 2010 at 12:34 am and is filed under Alternatives/Organics, International, Nanotechnology. You can follow any responses to this entry through the RSS 2.0 feed. You can skip to the end and leave a response. Pinging is currently not allowed.