(Beyond Pesticides, June 3, 2010) City lawmakers in Albany, New York want to strengthen an 11-year-old ban on the use of some pesticides on city land after the revelation last week that one such banned chemical was sprayed near a local playground earlier this month. 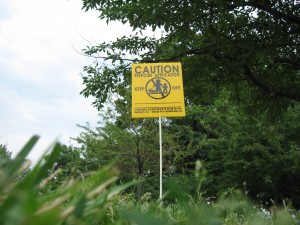 Albanyâ€™s Parks and Recreation Commissioner John D’Antonio said last Friday he was unaware of the ban, passed by the council in 1998, until he began researching a recent citizen complaint. The city is now rethinking its use of pesticides and exploring why the ban on city use of pesticides dubbed most toxic by the federal government was not more widely known. The law also required departments using less toxic pesticides to annually report plans to phase them out to the Common Council.

TruGreen, a city contractor, used Trupower 3 Selective Herbicide, which is a mixture of 2,4-D, mecoprop-p and dicamba, and is listed in Toxicity Category 1 (most toxic) by the Environmental Protection Agency (EPA) — causing potentially irreversible eye damage, but is also toxic if ingested and can be irritating to the skin. The herbicide has been banned from city land, except in rare circumstances, since 1999. Under the same ordinance, all city agencies that use less toxic pesticides, listed as categories II and III, are supposed to report annually on their use — and plans to phase them out — to the Common Council. However, reports have not been made in years.

Council President Pro Tempore Richard Conti said responsibility for oversight and enforcement of the ordinance needs to be more clearly defined, especially since fields at Bleecker Stadium, the West Hill park where pesticides are also applied, is used by some schools.

“I’m not sure what the breakdown was with parks and recreation because this issue and the pesticide use issue has been discussed in public forums,” Mr. Conti said. “You need to have some entity that’s responsible for enforcement and ensuring that departments are complying.”

The issue came to light after a Pine Hills resident inquired about chemicals being sprayed at Ridgefield on May 20 while she played on the swings there with her two sons, aged 8 months and 3 years old. Save the Pine Bush, an environmental group has questioned the city’s use of pesticides at the Rapp Road landfill, is planning a rally for Tuesday afternoon in Academy Park across from City Hall.
This breakdown in pesticide enforcement in New York comes at the heels of the new law, Child Safe Playing Field Act, recently signed by Governor Patterson. The law aims to protect children by banning the use of pesticides on school playing fields and play grounds. Schools will have one year to comply with the regulations. While the earlier versions of the legislation included all outdoor school grounds, the scope was narrowed to include only playgrounds and playing fields to help ensure passage. The Child Safe Playing Field Act requires that all schools, preschools, and day care centers both public and private to stop using pesticides on any playgrounds or playing fields. The law does allow for emergency application of pesticides for infestations if the County Health Department, the Commissioner of Health, the Commissioner of Environmental Conservation or the school board deems it an emergency.

The recent development in Albany however, highlights the need for effective enforcement and stringent regulatory oversight of pesticide laws. Across the country, lack of enforcement of pesticide laws has led to misuse of toxic chemicals which have poisoned people and animals, and in worst cases, death. Over the past three decades, the U.S. Government Accountability Office (GAO) has issued numerous reports and testimonies examining limitations with respect to various efforts to regulate pesticides in several areas, including pesticide registration and reregistration, pesticide warnings, banned and unregistered pesticides, and nonagricultural and lawn care pesticides. GAO, which has been highly critical of conflicts of interest in the state enforcement of pesticide use violations, poisonings and contamination – finding that the same agencies promoting and advancing pesticide-intensive management practices are charged with enforcement.

In order to be effective or to have any relevance, environmental laws, like other laws, must be enforced. Pesticides are regulated primarily under the Federal Insecticide, Fungicide, and Rodenticide Act (FIFRA) which authorizes EPA to oversee the registration, distribution, sale, and use of pesticides. States are authorized to regulate pesticides under FIFRA and under state pesticide laws, which differ from state to state. Pesticide application must be consistent with both federal and state laws. When it comes to enforcement, states have primary authority for compliance monitoring and enforcing against use of pesticides in violation of the law, efforts that are supported with a grant from the federal government. Generally, many pesticide complaints arise because the pesticide was used in violation of labeling requirements, applied at the wrong location, or because of pesticide drift.

This entry was posted on Thursday, June 3rd, 2010 at 8:54 am and is filed under New York, Pesticide Regulation, TruGreen. You can follow any responses to this entry through the RSS 2.0 feed. You can skip to the end and leave a response. Pinging is currently not allowed.