(Beyond Pesticides, September 8, 2010) The U.S. Environmental Protection Agency (EPA) has received a new Biological Opinion from the National Marine Fisheries Service (NMFS) with a finding that the application of products containing any of 12 organophosphate (OP) pesticides are likely to jeopardize federally listed threatened or endangered Pacific salmon and steelhead and their designated critical habitat. The 12 OPs addressed in this Biological Opinion, issued under the Endangered Species Act, are azinphos-methyl, bensulide, dimethoate, disulfoton, ethoprop, fenamiphos, methamidophos, methidathion, methyl parathion, naled, phorate, and phosmet. 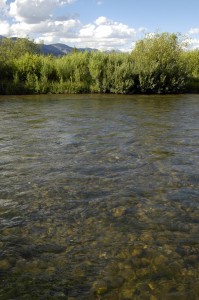 This opinion concludes that EPAâ€™s registration of pesticides containing bensulide, dimethoate, ethoprop, methidathion, naled, phorate, and phosmet are each likely to jeopardize the continued existence of one or more of the 28 endangered and threatened Pacific salmonids and are each likely to destroy or adversely modify designated critical habitat for one or more of the 28 threatened and endangered salmonids. NMFS reached this conclusion because predicted concentrations of these seven pesticides in salmonid habitats, particularly in floodplain habitats, are likely to cause adverse effects to at least one listed Pacific salmonids including significant reductions in growth or survival. EPA’s registration of bensulide, dimethoate, ethoprop, methidathion, naled, phorate, and phosmet is also likely to result in the destruction or adverse modification of critical habitat for 25 affected species because of adverse effects from at least one active ingredient on salmonid prey and water quality in freshwater rearing, spawning, and foraging areas. EPA will follow-up by developing a plan explaining how the agency will implement NMFSâ€™ opinions.

The report, released August 31, 2010, is the third biological opinion issued as a result of a court settlement with fishermen and conservationists, filed by the non-profit law firm Earthjustice. The biological opinion prescribes measures necessary to keep these pesticides out of salmon waters in Washington, Oregon, California, and Idaho. The previous opinion, issued in April 2009, found that the pesticides, carbaryl, carbofuran, and methomyl, harm salmon and steelhead. In response to the NMFS recommendation and EPAâ€™s protective measures, Dow AgroSciences and Cheminova, manufacturers of carbaryl, carbofuran and methomyl products, stated that they were â€śbaffled by the agencyâ€™s position,â€ť saying that their products do not threaten endangered species. Citing their â€śsolid scientific evidenceâ€ť that they claim is â€śfar more complete than is reflected in the NMFS Biological Opinion,â€ť they are not prepared to make the registration revisions [to their products].

In 2002, the Pacific Coast Federation of Fishermenâ€™s Associations, Northwest Coalition for Alternatives to Pesticides (NCAP), and other salmon advocates, with legal representation from Earthjustice, obtained a federal court order declaring that EPA had violated ESA by failing to consult with NMFS on the impacts that certain pesticides have on salmon and steelhead in the Pacific Northwest and California. As a result of that lawsuit, EPA began consultations, but NMFS never issued Biological Opinions or identified the measures needed to protect salmon and steelhead from the pesticides. In 2007, the salmon advocates filed a second lawsuit and entered into a settlement agreement with NMFS that establishes a schedule for issuing the required Biological Opinions. In all, over thirty pesticides will undergo review by the National Marine Fisheries Service over the next three years.

Under the terms of settlement, EPA must implement measures within a year-long timeframe to prevent further exposure of the pesticides to the water that cultivate these species. The measures recommended by NMFS include: a ban on application of the three pesticides in windy conditions and buffer zones near water resources and require that land applications must be at least 50-600 feet from the water resource and aerial spraying requires a 600-1,000 foot buffer zone. EPA plans to achieve protection goals through the methods outlined by NMFS in the Biological Opinion and by alternative methods that EPAâ€™s scientific analyses determined will achieve the same purpose. For example, EPA will require pesticide drift buffers adjacent to salmon and steelhead habitat but will impose different width buffers, some wider and others narrower than those recommended by NMFS, depending on factors that affect how far the pesticide might drift from the application site.

Many of the mitigation measures required in the new Biological Opinion mirror those NMFS mandated in a previous biological opinion for organophosphate pesticides. Recently, the pesticides mehidathion, methyl parathion, azinphos-methyl have gone through the cancellation process.

This entry was posted on Wednesday, September 8th, 2010 at 3:09 am and is filed under Bensulide, California, Carbaryl, Carbofuran, Dimethoate, Ethoprop, Idaho, Methidathion, Methomyl, Oregon, Phorate, Phosmet, Washington, Wildlife/Endangered Sp.. You can follow any responses to this entry through the RSS 2.0 feed. You can skip to the end and leave a response. Pinging is currently not allowed.