(Beyond Pesticides, December 15, 2010) Every year, more than 10,000 kids are poisoned by rodenticides (pesticides made to kill rodents) and virtually all of the calls to U.S. poison control centers concern children under six. New rules and restrictions set by the U.S. Environmental Protection Agency (EPA) will go into effect next June in an attempt to prevent incidents involving children, but do not go far enough to protect children or wildlife. 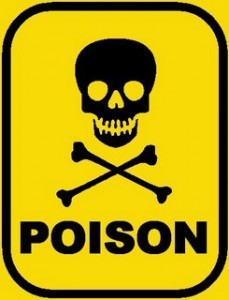 EPA has known for a generation that children have easy access to these super-toxic rat poisons. Every year, more than 10,000 kids are getting a hold of them, with Black and Hispanic children living below the poverty line being disproportionately affected. Records show that the EPA is aware that children have been getting into these poisons in significant numbers, according to data since 1983. Between 2004 and 2008, U.S. poison control centers continued to receive 10,000 to 14,000 calls about the rat killers annually. EPA has estimated that these incidents reported to poison control centers probably account for only about one-fourth of all exposures. On average, about 3,700 of these cases are treated by medical professionals each year, according to reports of the American Association of Poison Control Centers.

EPA reported that these rat poisons ÔÇ£are, by far, the leading cause of [pesticide-related] visits to health care facilities in children under the age of six years and the second leading cause of hospitalization.ÔÇØ Poisoned children can suffer internal bleeding, coma, anemia, nosebleeds, bleeding gums, bloody urine and bloody stools.

Now, decades after these products were first introduced to the public, and 14 years after the Food Quality Protection Act (FQPA), which was designed to protect children from dangerous pesticide exposures, EPA is moving to curb widespread use of these rodenticides, starting June 2011. That move, however, could be short-circuited by a lawsuit filed by the multinational corporation that sells rodenticide products. Reckitt Benckiser, a multinational consumer-products marketer, filed suit in federal court to prevent EPAÔÇÖs new rules from going into effect. The company says restrictions on use of rat poison likely will lead to ÔÇ£potentially significant public health consequences.ÔÇØ Pesticide manufacturers, applicators and health officials say controlling rats is an important public health goal because they can spread a number of diseases, including hemorrhagic fever, leptospirosis, salmonellosis and rat bite fever.

On May 29, 2008, EPA released its final risk mitigation decision for ten rodenticides, which outlines new measures it says will help protect children and the public from accidental poisonings as well as to decrease exposures to pets and wildlife from rodent-control products. This came after the Natural Resources Council (NRDC) and the West Harlem Environmental Action (WE ACT) filed a lawsuit in 2004 challenging EPAÔÇÖs regulations. In 2005, a New York CityÔÇÖs federal court ruled that the EPA failed to protect children from exposure to chemical rat poisons, and failed to require chemical manufacturers to strengthen safeguards. (See Daily News, August 17, 2005.)

However environmentalists feel the final risk mitigation decision and new rules fall short of adequately protecting the health of people, wildlife and the environment. EPA is requiring that ten rodenticides: brodifacoum, bromadiolone, bromethalin, chlorophacinone, cholecalciferol, difenacoum, difethialone, diphacinone, warfarin, zinc phosphide, used in bait products marketed to consumers be enclosed in bait stations, making the pesticide inaccessible to children and pets, and is also prohibiting the sale of loose bait, such as pellets, for use in homes. The new rules are voluminous, but the basic changes are:

-Disallowing the sale of the highly toxic second-generation rat poisons at the retail level. Currently they are commonly sold at grocery, drug and hardware stores.
-Limiting the amount of bait that can be sold over the counter to no more than one pound, and only in bait stations designed to keep out kids and dogs.
-Allowing professional exterminators and employees of farms and businesses to continue to use the loose baits and the more-toxic rodenticides ÔÇö but requiring them to be put onto above-ground locations where they cannot be disturbed by children, pets or wildlife. These baits also may not be placed more than 50 feet from a building.

EPA believes this will reduce the amount of product in the environment, providing additional protection for wildlife from poisonings by these more toxic and persistent products. However, many wildlife poisonings do not come from direct contact with the bait. These rodenticides have been involved with the poisonings of federally listed threatened and endangered species, for example the San Joaquin kit fox and Northern spotted owl. Poisonings occur when predators or scavengers feed on poisoned rodents eventually accumulating residues that may be many times the lethal dose.

There are several shortcomings to the new restrictions. Human and wildlife exposures to these toxic chemicals, though slightly minimized, would nevertheless continue because of their continued availability for use in agricultural production and to pest control operators. Pest control operators will still be allowed to use these chemicals in homes, at their discretion, which means residential exposures continue, albeit at slightly lower levels. These measures also do not apply to rodenticide field uses, or to tracking powder products, which may utilize any of the ten rodenticides, and thus continue to impact residential consumers and non-target wildlife.

Beyond Pesticides believes that IPM is a vital tool that aids in the rediscovery of non-toxic methods to control rodents and facilitates the transition toward a pesticide-free (and healthier) world. Sanitation, structural repairs, mechanical and biological control, pest population monitoring are some IPM methods that can be undertaken to control rodents. For more information on IPM, contact Beyond Pesticides or visit our IPM program page and the brochure ÔÇ£The Safer Choice.ÔÇ£

To learn more about rodenticides, visit Beyond PesticidesÔÇÖ Rodenticides fact sheet. For least toxic control of mice and other pests visit the alternatives page.

This entry was posted on Wednesday, December 15th, 2010 at 12:01 am and is filed under Children/Schools, Pesticide Regulation, Rodenticide, Rodents, Wildlife/Endangered Sp.. You can follow any responses to this entry through the RSS 2.0 feed. You can skip to the end and leave a response. Pinging is currently not allowed.

One Response to “Rat Poisons Continue to Threaten Children”