Thousands of Women Farmers in Brazil Protest the Use of Pesticides

(Beyond Pesticides, March 07, 2011) To mark International Womenâ€™s Day on March 8, members of the international peasant movement Via Campesina demonstrated last week in six Brazilian states. Using the slogan “Women Against the Violence of Agribusiness and Agrotoxins For Land Reform and Food Sovereignty,” they marched together with other organizations working for the rights of women and the rural population. It is important to note that several diseases that are found predominantly in women are highly linked to exposure of pesticides such as female reproductive tract abnormalities, breast cancer and thyroid disease. 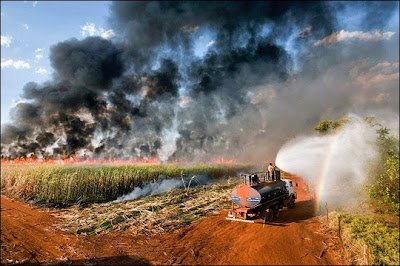 According to the Brazilian Crop Protection Association (AENDA), which represents producers of farm chemicals, Brazil uses more than one billion liters of agricultural chemicals a year, making it the top consumer country since 2009 of weed killers and insecticides that have toxic effects to humans and wildlife.

According to the U.S. Department of Agriculture (USDA), Brazil is among the world leaders in the production of sugarcane, sugar and ethanol. Most of the sugarcane planted in Brazil is used to produce ethanol and the United States is the largest market for this product. Brazil exports 10,000 to 20,000 metric tons of cane sugar to the United States.

Our food choices have a direct effect on the health of our environment and those who grow and harvest what we eat around the world. Thatâ€™s why food labeled organic is the right choice. In addition to serious health questions linked to actual residues of toxic pesticides on the food we eat, our food buying decisions support or reject hazardous agricultural practices, protection of farmworkers and farm families, and stewardship of the earth.

For over sixty years, the Rodale Institute has been researching the best practices of organic agriculture and sharing its findings with farmers and scientists throughout the world, advocating for policies that support farmers and educating consumers about how going organic is the healthiest options for people and the planet. CEO of Rodale Inc and member of the Board of Directors of Rodale institute, Maria Rodale, is scheduled to speak at Beyond Pesticidesâ€™ 29th National Pesticide Forum, Sustainable Community – Practical solutions for health and the environment April 8-9 in Denver, CO. Ms. Rodale is the author of three books. Her most recent work, Organic Manifesto, provides an indispensable and highly readable look at why chemical-free farming unquestionably holds the key to better health for our families-and the planet. To learn more about organic food click here.

This entry was posted on Monday, March 7th, 2011 at 12:01 am and is filed under Environmental Justice, Farmworkers, International. You can follow any responses to this entry through the RSS 2.0 feed. You can skip to the end and leave a response. Pinging is currently not allowed.