(Beyond Pesticides, July 21, 2011) For the first time, a federal agency has officially recognized that the loss of a species is related to climate change; the species at risk, the whitebark pine, faces a barrage of threats, including invasive diseases and insects which have not previously been able to thrive in the tree’s cold territory. In addition to other man-made causes for climate change, pesticides play a significant role through heavy use of fossil fuels in the manufacturing process and emissions. Conventional agricultural practices further contribute to climate change through the heavy reliance on pesticides and fertilizers, and through degradation of the soil, which releases carbon. 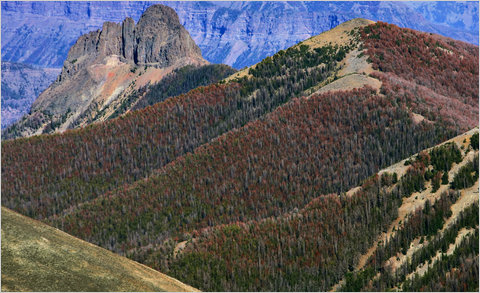 As temperatures have warmed, the amount and variety of pests in regions that do not traditionally have problems are increasing. Researchers at the University of Washington have found that insect species that adapt to warmer climates also will increase their maximum rates of population growth, meaning that global warming will likely lead to increased insect populations. In New England, entomologists have noted an increase in the number of insects, including ticks carrying lyme disease and mosquitos with West Nile Virus and encephalitis. Scientists believe that climate change will increase disease transmission by shifting insectsŌĆÖ geographic range, increasing reproductive and biting rates of the insects, and by shortening the pathogen incubation period.

The whitebark pine is being attacked by the mountain pine beetle. Though the beetles are native to the region where whitebark pine grows, according to National Park Service, higher average winter temperatures in the Rocky Mountains over the last ten years have allowed the pests to proliferate. Hard winters with cold temperatures can kill beetle eggs and larvae wintering under a treeŌĆÖs outer bark.

Roughly two-thirds of all the whitebark pine trees have been wiped out in the hardest-hit areas, Yellowstone and Glacier National Parks. However, the U.S. Fish and Wildlife Service (FWS) announced earlier this week that an endangered or threatened species listing was ŌĆ£warranted but precluded.ŌĆØ There is not enough funding or staff time to allow it to be listed as threatened or endangered. According to National Resources Defense Council (NRDC), who filed a petition to have the tree listed, FWSŌĆÖs decision means that the tree’s status will be revisited in 12 months to determine if resources are available to begin generating a species recovery plan which would outline goals and tactics for protecting and recovering whitebark pine. FWS has given the species the highest possible priority, unfortunately given the current economic and political climate, funding for managing essential environmental protections have been mired.

What else can we expect in the coming future because of climate change? In addition to increases in insects and insect-borne diseases, the U.S. Department of Agriculture (USDA) research shows that weeds also flourish from increasing levels of carbon dioxide in the atmosphere. Researchers have found ŌĆ£noxiousŌĆØ weeds to be more adaptable to changing conditions than crops, predicting further growth of their productivity and range in urban and rural areas. Other research by the same team shows that common pollen allergens – including the troublesome ragweed pollen – may be getting worse as a result of global climate change as well.

Despite the increase of pests that climate change may bring, using more pesticides is not the answer and will only lead to increased problems with climate change, along with risking our health and the health of our ecosystems. Studies show that conventional landscaping practices actually cause greenhouse gas emissions at a rate up to four times greater than the lawnŌĆÖs ability to sequester carbon dioxide from the atmosphere through photosynthesis.

Sulfuryl fluoride, a pesticide that is in the process of a phase-out, has been shown to be a highly potent greenhouse gas. Research has shown that it can be as much as 4,000 times more efficient at trapping heat than carbon dioxide, the leading atmospheric contributor to climate change. It currently exists in the atmosphere at much smaller concentrations than CO2, which is why its use must be curtailed before it becomes even more of a concern.

One way to reduce the impact of chemical-intensive agriculture on climate change is to grow an organic garden. Research suggests that organic techniques can reduce the output of carbon dioxide by 37-50%, reduce costs for the farmer, and increase our planetŌĆÖs ability to positively absorb and utilize greenhouse gases. The Rodale InstituteŌĆÖs Farming Systems Trial (FST – comparing organic and conventional) shows that organic techniques actually has the potential to lessen the impacts of climate change and restore soil fertility.

This entry was posted on Thursday, July 21st, 2011 at 12:01 am and is filed under Climate Change, Wildlife/Endangered Sp.. You can follow any responses to this entry through the RSS 2.0 feed. You can skip to the end and leave a response. Pinging is currently not allowed.