(Beyond Pesticides, December 19, 2012) The Congressional Research Service (CRS) issued its overview report, Bee Health: The Role of Pesticides, in response to a congressional request for more information on the connection between declines in bee populations, colony collapse disorder (CCD) and pesticides, particularly neonicotinoids. The 23-page report, dated December 11, 2012, summarizes the range of scientific studies and regulatory activities without offering a critique of what bee health advocates have identified as serious deficiencies in the regulatory review process and compliance with the pesticide registration law. The review gives equal standing to independent and industry science.

The CRS report identifies a range of issues regarding:

1. Changes to managed and wild bee 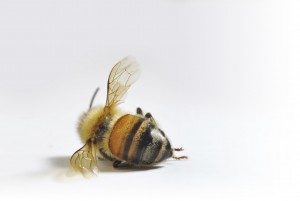 2. Factors that are documented to impact bee health, including pesticides, pests and diseases, diet and nutrition, genetics, habitat loss, and beekeeper issues, highlighting that there are multiple exposure pathways that may work synergistically;

3. Scientific research on the role of pesticides; and,

The report reviews the ‘state of play’ on the issue of bee declines and finds that there are reported to be many factors that contribute to the decline in bee populations, noting that â€śpesticides are only one of the many influences on bee health.â€ť It notes that the U.S. Environmental Protection Agency (EPA) is revisiting its risk assessment review process to reflect advances in science on bee exposure to pesticides.

The reportâ€™s summary of the role of pesticides, and neonicotinoid pesticides in particular, notes that, â€ś[T]he focus of this report on bee exposure to pesticides is not intended to imply that pesticides are as important or more important in influencing health and wellness of bee colonies as compared with other identified factors.â€ť The report cites the statutory framework for pesticide regulation, specifically EPAâ€™s process of protecting against “unreasonable” adverse effects to health and the environment in registering an active pesticide ingredient, stating, â€śEPA specifically takes into account unintended harm to beesâ€ť by requiring information on the acute toxicity of a pesticides on exposed bees. The report’s authors identify bee exposures to the pesticides applied by beekeepers in managing diseases in their hives and accidental exposure, at the same time that it cites secondary impacts on bee health associated with the legally labeled pesticide uses.

Meanwhile, the report acknowledges the change in bee health and the sudden and mysterious disappearance of bees, described as CCD, that occurred shortly after the introduction of systemic neonicotinoid pesticides on the market worldwide. Many researchers have focused on this key factor -the introduction of a powerful systemic pesticide found in pollen, nectar, and gutation drops- that has changed among the constellation of possible contributors, as well as the failure of the regulatory review to obtain a required field study from the neonicotinoid pesticide manufacturer Bayer CropScience. In recognizing the sharp decline that occurred in the bee population, the CRS report states:

“In the United States, commercial migratory beekeepers along the East Coast of the United States began reporting sharp declines in 2006 in their honey bee colonies. The U.S. Department of Agriculture (USDA) reports that overwinter colony losses from 2006 to 2011 averaged more than 32% annually.” The CRS report relies, in part on previous work of the National Academy of Sciences (NAS), saying, “A 2007 report by the National Research Council of the National Academy of Sciences, Status of Pollinators in North America describes many of the factors affecting bee health and population effects.” The NAS report, more than five years old now, was written prior to the huge body of recent research that provides further insight into the role of pesticides on honeybee, bumblebee, and pollinator health.

CRS continues by providing a compiled a list factors that were identified as contributors to bee declines:

â€ťÂ˘ parasites, pathogens, and diseases (for a detailed listing, see text box);
â€ťÂ˘ bee genetics including lack of genetic diversity and lineage of bees, and
increased susceptibility and lowered disease resistance, and also miticide resistance by the mites;
â€ťÂ˘ diet and nutrition including poor nutrition due to apiary overcrowding, pollination of crops with low nutritional value, and pollen or nectar scarcity associated with invasive plants;
â€ťÂ˘ bee management issues including transportation stress from migratory beekeeping, overcrowding, feeding practices, chemicals used by beekeepers to control mites (antibiotics and miticides), confinement and temperature fluctuations, susceptibility to disease, potential for cumulative exposure to diseases and parasites, use of bees for honey production versus pollination, chemical residue or contamination in the wax, and reliability of the queen source;
â€ťÂ˘ habitat loss, and other environmental or biological stressors including loss of foraging area, interspecific competition between native and non-native bees, pathogen spillover effects, and climate change;
â€ťÂ˘ pesticides including acute or cumulative exposure to new types and combinations of agricultural pesticides through a variety of media including dust, water droplets, pollen, and nectar;
â€ťÂ˘ other agricultural practices including the use of genetically incorporated pesticides in seeds or treated seeds, such as with bioengineered crops; and,
â€ťÂ˘ potential cumulative and interactive effects of each of these factors.

On neonicotinoids, CRS cites both the independent and industry science, giving equal weight to vastly different and often contradictory findings on the role of pesticides in bee declines. While CRS mentions imidacloprid’s role in bee-kills in Germany and clothianidinâ€™s role in France, the report does not discuss the French moratorium on neonicotinoids or other regulatory actions that underline the true importance of neonicotinoids as an important contributor to CCD. The report cites industry studies that dismiss the importance of pesticide residues found in plants and bees. The CRS notes, however, that, “Krupke et al. [Christian Krupke, Ph.D., associate professor of entomology at Purdue University] found levels of neonicotinoids in bee-collected corn pollen that were similar to levels of imidacloprid determined by other scientists to have sublethal effects potentially affecting colony health.”

The CRS report also acknowledges research findings that have focused on the potential of neonicotinoids to “affect complex behaviors in insects, including flight, navigation, olfactory memory, recruitment, foraging, and coordination.” It finds, “One study has reported sublethal effects of neonicotinoid pesticides on honey bee foraging behavior that may impair the navigational and foraging abilities of honey bees.” The report goes on: “Other studies have found impaired brood development and increased rates of Nosema infection in honey bees exposed to sublethal pesticide levels. Imidacloprid ingestion by stingless bee larvae at rates above 0.0056 Âµg/bee decreased survival rates, negatively affected development of a specific region of the bee brain called the mushroom body, and impaired walking behavior of newly emerged adult worker bees.”

CRS identifies multiple pathways for exposure, including foraging during the planting season, bee kills from contaminated dust clouds, and hive exposure through pollen deposits, highlighting those studies that focus on crops that include corn, canola, sunflowers, squash and pumpkin flowers.

CRS references a Bayer CropScience report, which contradicts the independent findings it cites earlier that determined neonicotinoid pesticides affects honey bee foraging behavior, saying that â€śscientists at Bayer CropScience argue that the dose of thiamethoxam delivered to bees in this case was not â€ťËśfield-relevant.â€™â€ť The second time it references Bayer CropScience, CRS indicates that its scientists have â€ścriticized one of the studies linking neonicotinoid exposure with Nosema infection because it was conducted in the laboratory and not under field conditions.â€ť

The points here are based on an unpublished memo developed by Bayer CropScience, a company that profits from neonicotinoid sales, entitled â€śOverview of recent publications on neonicotinoids and pollinators.â€ť Unfortunately, the CRS report neglects to include two pertinent rebuttals filed with EPA. Dr. Krupke and James Frazier, Ph.D, professor of entomology at Pennsylvania State University, stood behind the strength of their published studies connecting neociotinoids to bee declines. Indeed, Dr. Krupke responded to Bayerâ€™s report, saying:

â€śThe spurious claim that the concentrations of neonicotinoids we reported in stored pollen (2.9-10.7 ppb clothianidin and 6.2-20.4 ppb thiamethoxam, found co-occurring) were â€ťËśnot high enough to represent a significant risk for honey beesâ€™ is not supported by data. Sublethal effects of these compounds remain an active area of research and what constitutes a ‘significant risk’ is far from well defined.â€ť

Similarly, Dr. Frazier pointedly indicated that Bayer’s report is flawed, saying, â€śUnlike a normal literature review, where the pros and cons of a given paper are presented along with all pertinent literature that bear on alternate interpretations or provide conflicting results, the authors here provide only material used to refute the chosen study.â€ť CRS neglected to incorporate in its report this response to Bayer as well.

In sum, in attempting to strike a neutral tone, the report ends up downplaying the role of pesticides, particularly neonicotinoids, on bee health. However, if the reader follows the references and teases out the vested industry interests from independent science, the report identifies important information that supports the need for urgent action, and at the same time it identifies the need for more research. The report finds: â€ś[P]esticides are known to have some adverse local impacts to honey bees and some native beesâ€ťÂ¦ Widespread use of herbicides reduces habitat available to bees; many pesticides are known to be acutely toxic to bees, given sufficient levels of exposure; and some reports of local bee kill incidents have been well documented.â€ť Accordingly, at the very least, the report supports the continued work of government regulators in focusing on pesticides, pathogens and parasites, and a combination of stressors in diminishing honey bee and colony health. At the same time, it identifies the crisis in honey bee declines and the need to take precautionary action in the face of dramatic independent scientific findings of neonicotinoid pesticides on the bees’ survival. Again, this is yet another call for the public to pressure public officials to act.

Indeed, where the report deserved more substantial discussion was in its pesticide statute summary, which failed to address the critiques launched by public interests groups that the EPA has failed to act in the face of science-based research. On March 21, 2012 an emergency petition was filed with the EPA by public interest groups and beekeepers, asking the agency to suspend all registrations for pesticides containing the neonicotinoid pesticide clothianidin. The petition, which was supported by over one million citizen petition signatures worldwide, targeted the pesticide for its harmful impacts on honey bees. The legal petition establishes that EPA failed to follow its own regulations when it granted a conditional, or temporary, registration to clothianidin in 2003 without a required field study establishing that the pesticide would have no â€śunreasonable adverse effectsâ€ť on pollinators. The granting of the conditional registration was contingent upon the subsequent submission of an acceptable field study, but this requirement has not been met. EPA continues to allow the use of clothianidin nine years after acknowledging that it had an insufficient legal basis for initially allowing its use. Additionally, the product labels on pesticides containing clothianidin are viewed by the groups challenging EPA as inadequate to prevent excessive damage to non-target organisms, which is a second violation of the requirements for using a pesticide and further warrants removing all such mislabeled or misbranded pesticides from use.

This entry was posted on Wednesday, December 19th, 2012 at 2:26 am and is filed under Agriculture, Bayer, Clothianidin, Imidacloprid, Pollinators, Thiamethoxam. You can follow any responses to this entry through the RSS 2.0 feed. You can skip to the end and leave a response. Pinging is currently not allowed.

3 Responses to “Report Cites Multiple Causes, including Pesticides, of Declines in Bee Population”