Pesticides, Not Crop Intensification, Found To Be the Primary Cause of Bird Declines

(Beyond Pesticides, February 22, 2013) Scientists agree that farmland and grassland birds are on the decline worldwide, but the debate over the causes has been contentious. A study published Tuesday points to pesticide use as the single most important indicator of grassland bird declines in the U.S., raising long held concerns over wildlife impacts. 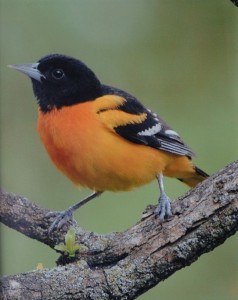 other biome –many linking declines to pesticide use– but similar research had not been conducted in the U.S. Proposed causes have ranged from: larger fields, the rise of uniform crop monocultures, the loss of native and natural habitat, the increase in autumn sowing and finally, the increase to fertilizer and pesticide inputs. Authors Pierre Mineau, PhD., senior research scientist on pesticide ecotoxicology with Environment Canada, and Melanie Whiteside sought to determine to what extent grassland bird declines were linked to agrochemical use in the U.S.

The results show that bird decline are, in fact, most correlated to pesticide use, rather than the intensification of crop production. Using information on agricultural intensity, pesticide use data published by the U.S. Department of Agricultureâ€™s National Agricultural Statistics Service, as well as bird breeding surveys conducted by the U.S. Geological Service between 1980 and 2004, researchers found that the best predictors of bird declines were:

1. ‘Lethal Pesticide Risk’; 2. Insecticide use; and 3. Loss of cropped pasture.

â€śOur results suggest that the use of lethally toxic insecticides cannot be ignored when trying to identify causes of grassland population declines in North America. Indeed, they offer a more plausible explanation for overall declines than does the oft-cited â€ťËśhabitat loss through agricultural intensification.â€™â€ť

The study highlights the major difference between U.S. and European pesticide use patterns: while the Europe Union tends to ban or restrict on powerful pesticides, more lenient pesticide regulations in the U.S. continue to allow many more pesticides that are toxic to birds. With direct pesticide toxicity3.9 times more likely as a predictor of declines than loss of cropped pasture, the study has powerful implications for the future of U.S. pesticide regulations.

Our food choices have a direct effect on farmers, wildlife, and consumers around the world: This is why food labeled USDA Organic is the right choice. In addition to serious health questions linked to actual residues of toxic pesticides on the food we eat, our food buying decisions support or reject hazardous agricultural practices, and the protection of farmworkers and farm families. See Beyond Pesticidesâ€™ guide Eating with a Conscience to see how your food choices make a difference.

Organic Solutions will be an important topic discussed further at the 31st Annual Pesticide Forum. Featured speakers will include Jeff Moyer, organic farm and gardening expert at the Rodale Institute and Courtney White, founder and creative director of the local organization, the Quivira Coalition. Beyond Pesticides is collaborating with local groups to bring many other speakers, top scientists, local and national activists and concerned citizens to share information on the issues local communities are facing. At the forum, participants and speakers alike will craft solutions and catalyze networks to advance positive health and environmental policy and change. Sustainable Families, Farms and Food: Resilient communities through organic practices will be held April 5-6, 2013 at the University of New Mexico in Albuquerque, NM. For more information and to register, go to www.beyondpesticides.org/forum.

This entry was posted on Friday, February 22nd, 2013 at 1:30 am and is filed under Agriculture, Alternatives/Organics, Pollinators. You can follow any responses to this entry through the RSS 2.0 feed. You can skip to the end and leave a response. Pinging is currently not allowed.

One Response to “Pesticides, Not Crop Intensification, Found To Be the Primary Cause of Bird Declines”