(Beyond Pesticides, July 30, 2013) A recent study published in Environmental Toxicology and Chemistry found levels of pesticide contamination from agricultural drift in Pacific Tree frogs in remote mountain areas including national parks. The study supports past research on the pesticide transport through atmospheric dust and rain. To conduct the study, researchers collected Pacific Chorus frogs, as well as water and sediment samples, from seven ponds ranging from Lassen Volcanic National Park at the northern most location of Central Valley to the Giant Sequoia National Monument. The samples were tested for 98 types of pesticides, traces of which were found in frog tissues from all sites. Two fungicides, pyraclostrobin and tebuconazole, and one herbicide, simazine, were the most frequently detected compound. This was the first time these compounds have ever been reported in wild frog tissues. 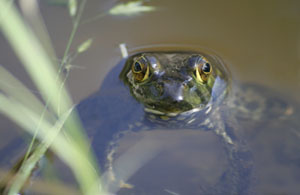 According to the study, chemical concentrations are often higher in the frog tissue than the environment. This happens as frogs store up small exposures over time, allowing pesticides to bioaccumulate in their bodies. Exposure to pesticides can decrease frogâ€™s immune system and increase their risk of disease. Continual pesticide exposure has led to dramatic declines in amphibian populations. Amphibians are considered the most threatened and rapidly declining vertebrate group, with more than a third of all Â amphibians listed in the International Union for Conservation of Nature and Natural Resources (IUCN) â€śRed Listâ€ť of threatened species. Â A 2013 study published in PloS ONE found that amphibians are vanishing at a rate of about 3.7 percent each year, which means that they will be absent from half of the habitats they currently occupy in about 20 years. Tyrone Hayes, PhD has done extensive research on the impact of pesticides on frog deformities and its implications for human and environmental health. For more information, watch his presentation from the 31st National Pesticide Forum: Protecting Life: From Research to Regulation.

Fungicides like pyraclostrobin and tebuconazole are routinely used in agriculture to spray or dust crops. Some crops receive up to a dozen doses of fungicides per growing season. Nationwide, fungicide use has risen considerably since the 1990s, reaching 350 million pounds in 2001. Californiaâ€™s Central Valley, where the study was conducted, is one of the most intensely farmed regions in North America, producing 8% of U.S. agricultural output by value and California uses more pesticides than any other state. A 2005-2006 U.S. Geological Survey (USGS) Â  study found fungicides in water samples collected from 29 streams in 13 states. Nine for 12 target fungicides were detected in at least one stream sample and at least one fungicide was detected in 20 of 29 streams. However, the environmental prevalence and effects on wildlife and ecosystems, particularly of newer fungicides, are poorly understood. According to Kelly Smalling, lead study author, â€śVery few studies have considered the environmental occurrence of pesticides, particularly fungicides which can be transported beyond farmlandâ€ť.

Another commonly detected pesticide found by researchers is DDE, a breakdown product of DDT, which is a highly persistent pesticide that was banned in 1972. DDT accumulates in an ecosystems food chain and infamously caused eggshell thinning for birds like bald eagles. This is not the first recent study to find concentrations of DDT and DDE in remote environments. A 2008 National Park Service (NPS) report, conducted in twenty parks throughout the Western U.S. and Alaska, found that DDT levels exceed the threshold for recreational fisherman in several parks. According to the NPS report co-author Michael Kent, â€śContaminants are everywhere. You canâ€™t get more remote than these northern parts of Alaska and the high Rockies.â€ť

This study helps illuminate the dangers of long-range transport pesticides, which are able to travel great distances by air, water, dirt, and soil through the food chain. They contaminate communities and ecosystems hundreds to thousands of miles from their application site. Long-range transportation pesticides create obvious regulatory problems because determining the source of pollution can be very difficult. . For more information on pesticide drift, read Beyond Pesticidesâ€™ report, Getting the Drift on Chemical Trespass: Pesticide drift hits homes, schools and other sensitive sites throughout communities. According to Ms. Smalling, â€śOur evidence raises new challenges for resource managers; demonstrating the need to keep track of continual changes in pesticides use and to determine potential routes of exposure in the wild.â€ť

The best way to reduce pesticide drift and protect sensitive ecosystems is to support organic agriculture, particularly at the check-out line. Organic agriculture embodies an ecological approach to farming that does not rely on or permit toxic pesticides, chemical fertilizers, genetically modified organisms, antibiotics, sewage sludge, or irradiation. For more information about the pesticides registered for use on foods we eat every day, see Beyond Pesticidesâ€™ Eating with a Conscience guide, and the Organic Food program page.

This entry was posted on Tuesday, July 30th, 2013 at 1:20 am and is filed under Agriculture, California, Pesticide Drift, simazine, tebuconazole, Water, Wildlife/Endangered Sp.. You can follow any responses to this entry through the RSS 2.0 feed. You can skip to the end and leave a response. Pinging is currently not allowed.