(Beyond Pesticides, August 22, 2013) After four years of relying on non-toxic mechanical controls to clear weeds on rights-of-way across Cape Cod, the Massachusetts-based power company NStar announced that it will begin using herbicides again this fall. All 15 Cape Cod towns have signed a no-spray resolution in 2011 and 2013, requesting NStar to use non-chemical means to defoliate transmission line easements, citing concerns for pesticide drift into the ground and surface water. Yet, despite extensive local opposition to the spraying, and evidence of the efficacy of organic land management to control weeds, NStar has refused to seriously consider alternative methods to spraying toxic herbicides. 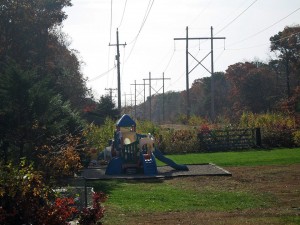 Many of the targeted spray areas where power lines are located are in close proximity to homes with private wells, in areas that drain into public water supplies, and adjacent to bike and walking paths. The pesticides can persist in the soil and be tracked into homes, or enter the surface or ground water where drinking water is sourced. Nearby residents can be exposed to drift, which can cause numerous adverse health effects.

Following the announcement, there is a 45-day comment period (which commenced August 7) overseen by the Massachusetts Department of Agricultural Resources (MDAR), which will have to grant approval before spraying can begin. Communities scheduled to be a part of the program include: Barnstable, Bourne, Brewster, Chatham, Falmouth, Harwich, Orleans and Sandwich. Many of these areas have taken steps toward organic land management on public property, and have previously fought against right-of-way applications by NStar.

Before 2004, NStar used effective non-chemical methods for controlling weeds along its rights-of-way, including mechanical cutting and hand-mowing. Between 2004 and 2007, NStar quietly began spraying herbicides. In 2008, when NStar filed a new Vegetation Management Plan, residents became aware of this practice, which prompted concerns. ┬Ā Several organizations and businesses formed a coalition, Cape Cod for a Truly Green NStar, in an effort to convince NStar to stop using herbicides on rights-of-way, in support of a ban on herbicides along rights-of-way. After months of public outcry, NStar agreed to a one-year moratorium on spraying until the end of 2010; increased pressure from local activists and residents resulted in NSTAR agreeing with the regional planning authority, Cape Cod Commission, to postpone the use of herbicides on rights-of-way until 2011.

ŌĆ£We suspended our use of herbicides on Cape Cod so we could listen and respond to local concerns about the program, and work cooperatively to address those concerns,ŌĆØ said Steve Sullivan, Vice President of Operations Services for Northeast Utilities, NSTARŌĆÖs parent company. ŌĆ£In the meantime, weŌĆÖve had to exclusively rely on less effective mechanical methods in order to protect electric service reliability on the Cape. An Integrated Vegetation Management program is a much more sustainable practice, as it does not rely on the repeated mowing down of everything growing within a right-of-way.ŌĆØ

However, when used in an effective manner, mechanical practices, which include cutting, girdling, mowing and grazing animals, provide effective means to eradicate unwanted vegetation along rightsŌĆØ┬ÉofŌĆØ┬Éway. Bad mowing practices, on the other hand, can actually cause many problems. Mowing too low, for instance, can kill the root system by preventing photosynthesis, and invites sunlight in for weeds to sprout.

Sue Phelan, director of GreenCAPE, a grassroots organization in Cape Cod that works to eliminate hazardous pesticides from the region, told the Cape Cod Online that NStar did not thoroughly consider alternatives to the use of herbicides. There are a number of different types of habitats in the Cape, and it is not a ŌĆ£one size fits all,ŌĆØ she said.

The company has previously refused to use goats, despite local attempts to utilize them. NStar has said that its customers do not want the clear cutting that mowing mimics and would not consider it, even with an electrical fence to keep them out of unwanted areas. However, grazing goats is a great option for land that suffers from unwanted plants, low organic matter and soil compaction, and they can be penned out of areas where the vegetation should remain intact. In fact, many places across the country, including the Congressional Cemetery in Washington, DC, have found success with using goats to for weed control.

Each year, millions of miles of roads, utility lines, railroad corridors and other types of rights-of-way are treated with herbicides to control the growth of unwanted plants. Unfortunately, drift from the application of these herbicides can negatively affect waterways, residents and organic farmers. Rights-of-way include roads, utility lines, and railroad corridors, although different states have varying policies for maintaining rights-of-way.

The best management strategy for weeds is to prevent them in the first place or manage ecosystems that are healthier and less susceptible to invasion. Beyond creating stronger ecosystems and working to prevent invasion, there are successful least-toxic weed management practices that can be used if an invasive species has been introduced into an area.

Biological methods, such as the use of native vegetation, in conjunction with mechanical means, create and encourage stable, lowŌĆØ┬Émaintenance vegetation that is a more permanent vegetation management strategy. The establishment of desirable plant species that can outŌĆØ┬Écompete undesirable species requires little maintenance and meets the requirements for management. Although native vegetation may take more time to establish itself, native flower and grass species are better adapted to local climate and stress. Native plant species are especially effective in providing increased erosion control, aesthetics, wildlife habitat, and biodiversity.

The combination of using these mechanical, biological and nontoxic vegetation control methods, along with planting native plant species effectively, reduces and eliminates the need for pesticide applications. Ultimately, creating and encouraging stable, low-maintenance vegetation is a more permanent vegetation management strategy than the constant application of toxic pesticides.

To learn more about how states can and have handled rights-of-way management, read Beyond Pesticides article ŌĆ£The Right Way To Vegetation Management.ŌĆØ

Take Action (Nationally): ┬ĀSome states allow residents the right to refuse herbicide use on their property and people can post their property with no spraying signs provided by the utilities. For example, Maine, North Carolina, and Oregon all have no-spray agreements. If you are interested in becoming active in your community to stop spraying on rights-of-way or other public spaces, such as parks and schools, please refer to our Tools for Change webpage and read The Right Way To Vegetation Management, which contains information about spraying policies along rights-of-way in different states.

This entry was posted on Thursday, August 22nd, 2013 at 12:01 am and is filed under Massachusetts, Pesticide Drift, Take Action, Water. You can follow any responses to this entry through the RSS 2.0 feed. You can skip to the end and leave a response. Pinging is currently not allowed.