Pesticide Blamed for Deaths of Hundreds of Wild Birds

(Beyond Pesticides, March 12, 2014) As many as 700 birds have been found dead in a wildlife reserve in New South Wales, Australia. Preliminary tests reveal that the pesticide, fenthion, was the cause of death for many little correlas, galahs and sulphur-crested cockatoos found over the past two weeks. Certain uses of fenthion for home gardens and a range of agricultural uses were scheduled for suspension by the Australian Government, but a few months ago fenthion use, long associated with bird kills, was extended for another year. 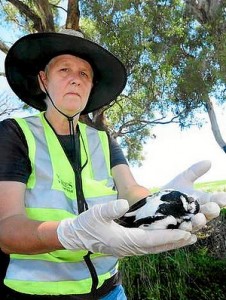 For the past two weeks, dead birds have been found all along a mile of Troy Reserve on the Talbragar River, in New South Wales, Australia. Testing of samples from the dead birds indicated fenthion, an organophosphate insecticide highly toxic to birds, as the most likely cause of the deaths. Volunteers helped gather the carcasses to prevent raptors, such as whistling kites and tawny frogmouths, from feeding on the poisoned carrion. About 30 sick birds, including two kites, have been so far been rescued.

Locals found the first deaths on February 27 but were initially prevented from collecting the carcasses out of concern about possible bird flu. About 200 dead birds were found on the first day of cleanup alone. The predominantly affected species is the little corella and with the number of deaths so high, ecologists and environmentalists believe this will have an impact on the local population. “Weâ€™ve got fantastically beautiful bird populations out here,” said Ann Mara, chairwoman of the Wildlife Information, Rescue and Education Service (WIRES) wildlife rescue group. â€śThis is a significant loss.â€ť According to the Australian Pesticides and Veterinary Medicines Authority (APVMA), the agency which oversees pesticide registration in Australia, in September 2012 a proposal was announced to suspend the use of fenthion products in certain horticultural situations, as well as in the home garden, on the basis of concerns regarding residues in food crops. Information relating to residues on certain fruit was assessed and it was concluded that the potential dietary exposure resulting from the use of fenthion on peaches and apricots was unacceptable. APVMA issued new instructions for use prohibiting the continued use of fenthion on certain horticultural crops, and modifying or restricting the use of fenthion on other crops including fruit fly treatments of many fruits and vegetables. Use of fenthion on food producing plants in the home garden was prohibited. However, in October 2013 the APVMA delayed the suspension of these fenthion uses until 30 October 2014. Unfortunately, had fenthion been suspended as first initiated in 2012, there may have been a different outcome for these bird populations.

Fenthion is very highly toxic to birds and highly toxic to estuarine/marine invertebrates and non-target organisms. In the U.S., fenthion was registered to control adult mosquitoes only. In 2002, American Bird Conservancy, Defenders of Wildlife, and the Florida Wildlife Federation filed a law suit in Federal District Court against the U.S. Environmental Protection Agency (EPA) to stop the continued use of fenthion in Florida. The suit Â said Â the registration of the pesticide, sold under the name Baytex Â  to kill mosquitoes in several counties in the state, violated the Endangered Species Act (ESA) and Migratory Bird Treaty Act. In 2003, the registrant, Bayer, voluntarily canceled all its fenthion product registrations. Over the years the chemical was implicated in several bird kill incidents, including bird kills on Marco Island, Florida. According to the American Bird Conservancy, other incidents involving bird mortality from the use of fenthion for mosquito control have been reported. In California, American goldfinch, gulls, ducks, shorebirds, green-backed heron, egrets, and many other species of passerine birds have been found after fenthion sprays for mosquito and/or midge control. In 1970 in Louisiana, more than 1,000 birds were reported dead after a fenthion application. In Massachusetts and Idaho, robins, sparrows, catbirds, and sandpipers have also been killed. With the bird kill in Australia, there is concern about higher-order birds, such as eagles, that may prey on poisoned birds, as well as concerns about long-term effects on bird populations. It is still unknown how the birds came into contact with the pesticide and the local authorities are asking for public information on the possible misuse of pesticides in the region. Water samples from the nearby Macquarie River have also been tested and preliminary results indicate that no pesticides have been detected. Birds face challenges from the widespread use of pesticides.

A 2013 study led by a preeminent Canadian toxicologist, Pierre Mineau, Ph.D., Â identifies acutely toxic pesticides as the most likely leading cause of the widespread decline in grassland bird numbers in the U.S. The report finds that the best predictor of bird declines is the lethal risk from insecticide use modeled from pesticide impact studies. Organic solutions to pest control and land management are the best ways to protect of bird and non-target wildlife populations.

Join us and continue the conversation with Dr. Mineau at Beyond Pesticidesâ€™ 32nd National Pesticide Forum, Advancing Sustainable Communities: People, Pollinators and Practices, April 11-12, 2013, Portland State University, Portland, OR to discuss organic solutions for protecting our environment. This yearsâ€™ forum will focus on solutions to the decline of pollinators and other beneficials; strengthening the organic food production system; regulating and right-to-know genetically engineered food; improving farmworker protection and agricultural justice; and creating healthy buildings, schools and homes. Source and Photo: The Sydney Morning Herald All unattributed positions and opinions in this piece are those of Beyond Pesticides.

This entry was posted on Wednesday, March 12th, 2014 at 12:01 am and is filed under Chemicals, Fenthion, International, Wildlife/Endangered Sp.. You can follow any responses to this entry through the RSS 2.0 feed. You can skip to the end and leave a response. Pinging is currently not allowed.