Your Voice Is Needed to Keep Organic Strong

(Beyond Pesticides, September 22, 2014) Help protect our organic farms and food from pesticides and genetically engineered organisms. Don’t let a weakened public process for organic standards, which Â looms large, roll back the progress we’ve made in growing organic production, and undermine public trust in the organic food label.The fall 2014 meeting dates for the National Organic Standards Board (NOSB) have been announced, and public comments are due by Tuesday, October 7, 2014. Your comments and participation are critical to the integrity of the organic label.

We’ve made tremendous progress in creating an organic food production system. Let’s not let USDA turn back the clock. 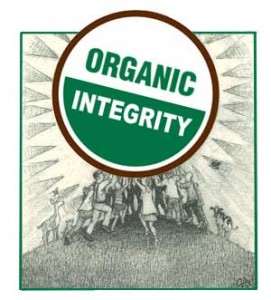 The 15-member board, consisting of 4 farmers, 3 environmentalists, 3 consumers, 2 food processors, and one retailer, scientist and certifying agent, votes to allow or prohibit substances and practices in certified organic food and farming. The NOSB acts as a lifeline from government to the organic community, as it considers input from you, the public -the concerned citizens upon whom organic integrity depends. That is why your participation is vital to the development of organic standards. Rest assured, if you submit a public comment either in person or online, your concerns will be considered by the Board. Remember that the NOSB can’t take serious action to protect organic integrity without your input!

Issues Before the NOSB for Fall 2014

Materials on the list below are either the subject of petitions or the subject of sunset review. Petitioned materials must have evidence summarized in the proposals that they meet the OFPA requirements of essentiality, no adverse effects on humans and the environment, and compatibility with organic practices. Sunset items are already on the National List, and being considered for delisting. They are subject to the same criteria, but are being considered under NOPâ€™s new rules.

The NOSB will vote on those materials subject to â€ś2015 Sunset Review,â€ť but any substantive comments on them now will be considered â€śuntimely.â€ť We have some procedural comments on them. Although the NOSB will not vote on those materials listed under â€ś2016 Sunset Summariesâ€ť at this meeting, comments received after October 7, 2014 will be considered untimely. The subcommittees have not published summaries of evidence concerning 2016 sunset materials.

There are also some very important issues in discussion documents and a proposal dealing with livestock vaccines made with genetically engineered organisms (“excluded methods” in Â organic law’s Â terminology). The NOSB will vote on the livestock vaccine proposal. Discussion documents are not up for a vote, but form the basis Â of future proposals, so Â this is a valuable opportunity to give input.

Make your voice heard! Help protect the integrity of organic and defend human health and the environment in the process. Check out Beyond Pesticidesâ€™ Keeping Organic Strong page to learn more about the issues, see our draft comments to the NOSB, and send your own comments. We ask that you submit comments on as many issues and materials as you can by the October 7, 2014 deadline. For help crafting your comments, view Beyond Pesticides’ commenting guide.

Maintain Your Stake in the Public Process

Major issues before the fall 2014 National Organic Standards Board.

When You Write: Save Our Organic from Changes that Weaken the Public’s Voice
When you provide your comment, let NOSB and USDA, know that the approval of synthetic materials in organic cannot be governed by the weak process that was adopted by USDA and imposed on the NOSB on September 16, 2013. (Background)

Beyond Pesticides encourages you to submit comments in your own words. For help with this process, view our commenting guide.

Please go to Beyond Pesticides’ Keeping Organic Strong webpage to learn more about these and other substantive issues and provide a unique public comment.

This entry was posted on Monday, September 22nd, 2014 at 2:43 pm and is filed under Agriculture, Alternatives/Organics, Announcements, National Organic Standards Board/National Organic Program, Take Action. You can follow any responses to this entry through the RSS 2.0 feed. You can skip to the end and leave a response. Pinging is currently not allowed.

2 Responses to “Your Voice Is Needed to Keep Organic Strong”