Over 200 Groups, Businesses, and Leading Scientists Call for Monarch Protection

(Beyond Pesticides, November 14, 2014) In the face of staggering declines of monarch butterflies, more than 40 leading scientists and 200 organizations and businesses this week urged the Secretary of the Department of the Interior, Sally Jewell, to protect these butterflies under the Endangered Species Act (ESA). These groups and scientists are supporting the formal petition to the U.S. Fish and Wildlife Service (FWS) submitted this summer, which seeks federal protection for monarch butterflies. 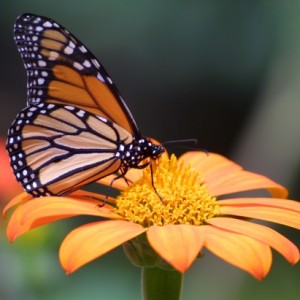 Forty scientists from around the U.S. and Mexico signed on to a letter requesting protected status for the butterflies and for FWS to recognize the importance of continued research by scientists and citizen scientists in understanding and conserving the monarch butterfly and its habitat. The scientists also request FWS to streamline the permitting process, so that scientific and conservation research and citizen science activities are encouraged rather than deterred by a listing. In a separate letter, over 200 environmental groups and businesses called on FWS to take swift and effective action by granting the monarch butterfly protection as a threatened species under the ESA. Both letters come in support of a formal petition to FWS seeking federal protection for monarchs. The petition was filed in August by the Center for Biological Diversity, Center for Food Safety, The Xerces Society for Invertebrate Conservation, and renowned monarch scientist Dr. Lincoln Brower.

The North American monarch butterfly population has declined by 90 percent in the past 20 years, dropping from a high of approximately 1 billion in the mid-1990s to fewer than 35 million butterflies last winter â€” the lowest number ever recorded. Monarch scientists believe the dramatic decline is being driven by the loss of milkweed plants â€” the monarch caterpillarâ€™s only food â€”in the Midwest where most monarchs are born.

According to the letters, many factors threaten the monarch butterflyâ€™s survival and vitality, including the loss of habitat, specifically the loss of milkweed plants throughout Midwest monarch breeding grounds -a loss which is considered a leading catalyst in the butterflyâ€™s alarming population decline. Milkweed is critical for monarch butterflies to reproduce, as it is the only source of food monarch larvae can eat. A recent study attributed the disappearance of milkweed plants primarily to the use of genetically-engineered (GE) corn and soybean crops. The vast majority of GE crops are made to be resistant to the herbicide glyphosate, a potent killer of milkweed. The dramatic surge in glyphosate use with GE crops has virtually wiped out milkweed plants in Midwestern corn and soybean fields, and in turn, significantly impacted the ability of monarch butterflies to reproduce. In addition to the loss of key breeding habitat, other threats to monarch butterflies include climate change, severe weather events, logging in overwintering sites, widespread use of pesticides, disease, and predation.

â€śThe extensive use of the herbicide glyphosate on genetically engineered crops has all but wiped out milkweed in crucial monarch breeding areas. If we have any hope of saving monarchs, our agricultural practices must be at the forefront of the conversation,â€ť said Larissa Walker, pollinator program director at Center for Food Safety.

â€śThe monarch butterfly is North Americaâ€™s most well-known and cherished insect,â€ť said Sarina Jepsen, endangered species program director at the Xerces Society. â€śWithout immediate action to protect this species and restore critical milkweed habitat, the spectacular migration of the monarch butterfly may no longer be an experience for future generations to enjoy.â€ť

The ESA allows species to be listed as â€śthreatenedâ€ť when they are at risk of becoming endangered in a significant portion of their range. This would allow for the protection of the species but also still allow the continuation of activities that promote their conservation, such as scientific research and monitoring, citizen monitoring and tagging, and non-commercial classroom and household rearing of monarchs for educational purposes.

â€śThe Endangered Species Act is the most effective tool available for spurring the large-scale effort thatâ€™s needed to protect the amazing monarch butterfly from extinction,â€ť said Tierra Curry, senior scientist at the Center for Biological Diversity.

Monarch butterflies make their way from the U.S. and Canada, usually arriving in Mexico around the beginning of November, clustering by the thousands in the boughs of fir trees. Although the same trip occurs every year, no individual butterfly makes it twice, as the butterflyâ€™s life span is too short. How the migration route lives on in the butterfliesâ€™ collective memory is an enduring scientific mystery. Researchers note that to compensate for the continued loss of habitat, refuges of milkweed must be set up to provide a source of food for butterflies.

You too can do your part to protect and support monarch butterflies, bees and other pollinators. Avoid using toxic pesticides in your home and garden, and support organic agriculture and food. Beyond Pesticides supports organic agriculture as effecting good land stewardship and reducing hazardous chemical exposures for workers on the farm. Attract beneficial insects like monarchs and bees by creating habitats in your own backyard. Like any other living organisms, pollinators need food, water, and shelter in order to thrive. Visit Bee Protective for more information on creating habitat in your home and community.

This entry was posted on Friday, November 14th, 2014 at 12:01 am and is filed under Agriculture, Alternatives/Organics, Litigation, National Politics, Pollinators, Take Action, Wildlife/Endangered Sp.. You can follow any responses to this entry through the RSS 2.0 feed. You can skip to the end and leave a response. Pinging is currently not allowed.