(Beyond Pesticides, February 3, 2015) Officials in the Florida Keys are seeking approval from the U.S. Food and Drug Administration (FDA) to release a wave of mosquitoes that have been genetically engineered to produce offspring whose larvae are unable to survive. The plan to introduce these mosquitoes has been met with intense skepticism by local residents. A change.org petition against the release has garnered over 146,000 signatures to date.

Florida Keys Mosquito Control District (FKMCD) officials have been planning the release alongside British biotechnology company Oxitec, which has already conducted similar experiments with the genetically engineered (GE) mosquitoes in Brazil and the Cayman Islands. Websites for Oxitec and the FKMCD assert that the GE aedes aegypti mosquitoes will significantly 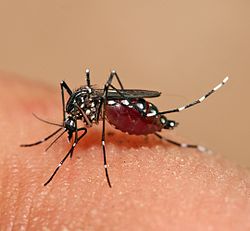 lower the numbers of the disease spreading insects, and reduce the need to spray insecticides. Opponents counter that the introduction of the modified mosquitoes is unacceptably risky, as there has been little research on possible non-target effects of the novel insect, and current control methods and public education have been successful at controlling exotic diseases. Opportunity for public comment to FDA and the U.S. Centers for Disease Control and Prevention is likely to occur in the near future.

Citing internal Oxitec company documents, British-based environmental organization Genewatch has raised alarms over the technology ┬á used to create the GE insects. Experiments with the OxitecÔÇÖs GE mosquitoes call for large numbers of modified males to be released in the wild to mate with female mosquitoes and produce offspring that are unable to develop. To create these autocidal male mosquitoes, the company uses the antibiotic tetracycline to act as a chemical switch, allowing the GE larvae to develop and survive in the lab, rather than die immediately as planned in the wild. Larvae are supposed to die in the wild due to an absence of tetracycline.

However, OxitecÔÇÖs documents discuss an experiment where 15% of insects in the lab survived because mosquitoes were fed off of chicken-based cat food that contained low levels of tetracycline even after it was heat-treated in attempts to remove traces of the antibiotic. Tetracycline is used in a variety of different settings, from agriculture to the control of human diseases, and ultimately makes its way into the environment. Studies show that most wastewater treatment plants are unable to effectively remove tetracycline antibiotics, and the compound is frequently detected in surface water, ground water, drinking water, wastewater, soils and sediment. Thus low levels of tetracycline in the environment may result in only a temporary reduction in the numbers of disease carrying mosquitoes. And there are further questions regarding the impacts of how tetracycline-exposed survivor GE mosquitoes may impact human health or wildlife.

Helen Wallace, Ph.D., director of Genewatch, notes in an interview with The Financial Times, ÔÇ£Staff would be better employed using the well-established public health approach of removing mosquito breeding sites [water containers] rather than in placing GM mosquito larvae at intervals across a site. Plans to scale up releases of GM mosquitoes in dengue-endemic Brazil should be halted. Authorities in other places where releases are planned, such as Florida and Panama, should also stop and think again.ÔÇØ However, Professor Anthony James from UC Irvine compares the use of GE mosquitoes to the widespread use of pesticides, stating in a 2012 Los Angeles Times article, ÔÇ£Most of the concerns are about some unintended off-target effects [involving species beyond the Aedes], but we know exactly what the off-target effects of insecticide are.ÔÇØ Rather than posit mosquito control as a choice between spraying and genetic modification, localities throughout the country have revealed that proper management can be achieved so that there is rarely, if ever, a need to employ such tools.

Control of disease-carrying mosquitoes can be successful when emphasis is placed on public education and preventative strategies. Individuals can take action by eliminating standing water, introducing mosquito-eating fish, encouraging predators such as bats, birds, dragonflies and frogs, and using least-toxic larvacides like bacillus thuringiensis israelensis (Bti). Community based programs should encourage residents to employ these effective techniques, focus on eliminating breeding sites on public lands, and promote monitoring and action levels in order to determine what, where, and when control measures might be needed. New JerseyÔÇÖs Cape May County provides an excellent example of a low-risk alternative to employing insecticides or introducing GE species. Cape May has used mosquitoesÔÇÖ natural predators, tiny copepods, to eat the larvae of the mosquito. Through education of proper cultural controls, and least-toxic and cost effective biological alternatives, the use of risky technologies such as toxic pesticides and GE mosquitoes can be avoided.

Localities in Florida, where the humid, subtropical environment provides year-round breeding conditions for mosquitoes, have a particularly tough time with mosquito control. Beyond Pesticides encourages residents of Florida and states across the country to attend the 33rd National Pesticide Forum, taking place this year in Orlando, FL, April 17-18th, 2015. Early bird registration is in effect until March 15, so make your plans to register today!

This entry was posted on Tuesday, February 3rd, 2015 at 12:03 am and is filed under Announcements, Florida, Genetic Engineering, Mosquitoes, Pests, State/Local. You can follow any responses to this entry through the RSS 2.0 feed. You can skip to the end and leave a response. Pinging is currently not allowed.