(Beyond Pesticides, March 6, 2015) Last Friday, Oregon enacted a new rule which bans the use of four types of bee-killing insecticides, including Â imidacloprid, clothianidin, thiamethoxam and dinotefuran, regardless of application method on linden trees and other Tilia species. The four insecticides that are now illegal to spray on Tilia trees are all in the neonicotinoid chemical class which are implicated in pollinator decline, and represents a step forward in protecting bees. However, Tilia trees are not the only route of exposure that bees and other pollinators have to neonics, which are currently applied to fields across the U.S. as seed treatment. 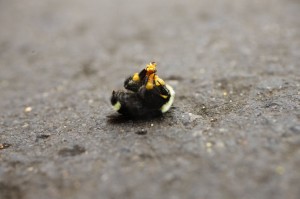 The rule comes at the request of the Oregon Department of Agriculture (ODA) following several bee-kill incidents in Oregon since June 2013, when more than 50,000 bumblebees were killed after dinotefuran was sprayed on trees in a shopping mall parking lot in Wilsonville, Oregon. After the incident in Wilsonville, ODA initially placed restrictions on two of the chemicals, dinotefuran and imidacloprid on Tilia trees, and the state launched a task force to look at protections for pollinators. The group came out with a range of recommendations including increased outreach and education about bees and support for bee habitat research, but stopped short of prioritizing state restrictions on neonicotinoid use.

Mounting scientific evidence points to the role of pesticides in bee declines across the globe, especially to neonics, which, even at low levels, have been shown to impair foraging, navigational and learning behavior in bees, as well as suppress their immune system to point of making them susceptible to pathogens and parasites.

Earlier this week, beekeepers, farmers, businesses and environmental advocates rallied in front of the White House to deliver over 4 million petition signatures calling on the Obama administration to protect pollinators, and over 125 groups sent a letter to the White House. Some promising steps have been taken, such as the ban of neonics on National Wildlife Refuges, and the issuance of a Presidential Memorandum which established a corresponding White House Task Force. However, federal agencies, such as the U.S. Department of Agriculture (USDA) and Environmental Protection Agency (EPA) remain hesitant to take meaningful action.

Meanwhile, local efforts provide a promising opportunity for communities across the United States to stand up for pollinators. Eugene (Oregon), Skagway (Alaska), Ontario (Canada), and the European Union have all instituted either permanent or temporary bans on the use of neonics.

With one in three bites of food reliant on bees and other insects for pollination, the decline of honey bees and other pollinators due to pesticides, and other man-made causes demands immediate action. Visit Beyond Pesticidesâ€™ BEE Protective webpage to learn more about the issue and what can be done to protect pollinators.

This entry was posted on Friday, March 6th, 2015 at 12:01 am and is filed under Agriculture, Announcements, Chemicals, Clothianidin, dinotefuron, Imidacloprid, neonicotinoids, Oregon, Pesticide Regulation, Pollinators, State/Local, Thiamethoxam, Wildlife/Endangered Sp.. You can follow any responses to this entry through the RSS 2.0 feed. You can skip to the end and leave a response. Pinging is currently not allowed.