(Beyond Pesticides, July 27, 2015) Two Michigan Representatives have introduced the Great Lakes Assurance Program Verification Act (HR 3120) in an effort to halt the pollution of the Great Lakes and other waterways by protecting them from agricultural run-off, which causes dangerous algae blooms Â­. While the proposed legislation aims to reduce the effects of pesticides in water, the bill still allows the use of toxic pesticides and fertilizers, and is only a voluntary measure, something that environmentalists says falls short. The bill is sponsored by Candice Miller (R-MI) and co-sponsored by Tim Walberg (R-MI). 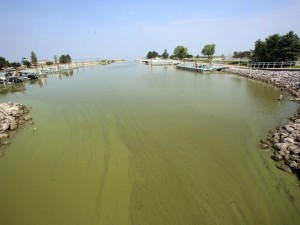 The bill aims to mimic the state program Michigan Agriculture Environmental Assurance Program (MAEAP). Adopted in 1999, the MAEAP is a voluntary three-phase program that provides “on-farm verification to ensure the farmer has implemented environmentally sound practices.” This raises two concerns: lack of incentive for farmers to join the program and ambiguous language defining what environmentally sound means. The results of MAEAP are the driving force in the fight for federal Great Lakes legislation, but those numbers do not necessarily speak for themselves. A major goal of the MAEAP is the Farmstead System which, “focuses primarily on protecting surface and ground water” through the safe and proper handling of pesticides, yet it still encourages the use of pesticides. Since its inception, the program has verified almost 3,000 farms in Michigan. According to Josh Appleby Â of the Michigan Department of Agriculture and Rural Development, nearly 1.7 million pounds of phosphorous has not gone into Michigan waters under Â MAEAP. According to Carl Bednarski, President of the Michigan Farm Bureau, “More than 10,000 farmers have initiated the process to voluntarily enter their farm into an environmental assurance program.” While these numbers seem impressive, it is important to note that they have been measured over the last 16 years.

Representative Miller expressed the importance of pollution prevention, such as phosphorous, in the Great Lakes. â€śOver 1 million tons of algae doesnâ€™t exist today because of the [MAEAP] program,â€ť she said; yet, despite the efforts of the MAEAP, that algae still plagues the Great Lakes and surrounding states. Just last year in August 2014, residents of Toledo, Ohio were advised to stop using tap water after a local water treatment plant found toxic substances in dangerous quantities in the water. 500,000 residents were instructed not to drink the water, brush teeth or prepare food with the water, or give it to pets. The contamination resulted from continuously growing algal blooms on Lake Erie, Ohio’s northern water source. The incident prompted an Environmental Protection Agency (EPA) investigation that explained, “The blooms are often caused by runoff from overfertilized fields, malfunctioning septic systems or livestock pens.”

Before Â the sudden contamination of Toledo’s drinking water, scientists had been tracking algal blooms in the Great Lakes Â almost five years prior to the incident and even recommended region-wide monitoring and a change in farm management practices. Though their recommendation suggested voluntary measures, which received much backlash from environmental advocacy groups, their reasoning was not baseless: the Great Lakes need protection from agricultural pesticide use. The sponsors Â of the Great Lakes Assurance Program Verification Act, much like the scientists studying the algal blooms on Lake Erie, have overlooked Â pesticides as a critical factor. Toxins like lindane, dioxin, PCB, and the Toledo-devastating microcystin that pollute major waterways like the Great Lakes are just a few of the residual consequences of agricultural and residential pesticide use.

The lawmakers of this bill say that the Great Lakes ecosystem is a “national and natural treasure.” Reps. Miller and Walberg went on to say in their editorial, Â “Our legislation would authorize the federal government to assist the states and their agricultural producers in implementing voluntary procedures aimed at protecting our environment. Specifically, states would be able to apply for grants from the USDAâ€™s Environmental Quality Incentives Program to administer and promote state-level assistance programs like Michiganâ€™s. Agricultural producers would also be eligible for priority consideration in applications for federally funded conservation projects.â€ť Improving the quality of the drinking water, the safety associated with recreational use, and the protection of Â aquatic and terrestrial ecosystems is an important goal of the Great Lakes Assurance Program Verification Act, Â however, advocates say that this cannot be achieved without a mandatory program.

This isnâ€™t just a domestic issue, since U.S. policy affects the Great Lakes, which share a border with Canada. The Canadian Environmental Law Association (CELA) and Clean Production Action (CPA) have already completed comprehensive assessments that support this idea. Lawmakers on both sides of the border are being asked to consider more meaningful Â strategies, such as Â organic land management.

Beyond Pesticides supports federal legislation that responds to the contamination being seen in the Great lakes with the urgency that it deserves, including policies that stop toxic pesticide use. In the case of the Great Lakes, a national program would certainly advance the goals of MAEAP across the Great Lakes Basin, and encourage the application of safer approaches to the management of farms and landscapes.

The current crisis in Â management practices calls for the transition to Â organic farming that does not require the use of toxic pesticides. Organic farming and land management uses natural, less soluble sources of nitrogen, phosphorous and magnesium, including cover crops, compost, manure and mineralized rock, in order to promote increases in soil organic matter and a healthy soil structure. Healthy soil structure allows water to infiltrate the ground slowly, rather than escaping across the surface and carrying soil particles, nutrients, and other inputs with it. Healthy soil structure also allows plants to establish vibrant root systems that resist erosion. For more information on the importance of an organic systems approach as a solution to pesticide use, see Beyond Pesticidesâ€™ article Increasing Biodiversity as if Life Depends on It.

This entry was posted on Monday, July 27th, 2015 at 1:29 am and is filed under Alternatives/Organics, Announcements, Litigation, Michigan, State/Local, Water. You can follow any responses to this entry through the RSS 2.0 feed. You can skip to the end and leave a response. Pinging is currently not allowed.