(Beyond Pesticides, August 12 2015) Last week, the City of Plattsburgh, New York, unanimously approved a policy that encourages city departments and city residents to reduce and eventually eliminate their use of toxic pesticides, such as neonicotinoids and glyphosate. In the same resolution, city residents and department heads are also encouraged to refrain from genetically modified organism (GMO) cultivation, though they recognize there is very little of that taking place within Plattsburgh city limits. While this policy can only be used to discourage the use of pesticides and GMOs, not implement an outright ban, due to preemptive New York state law that occupies the field of pesticide regulation, city officials are hopeful that they will be able to use their influence to implore the state of New York and U.S. legislators to take statewide and nationwide measures on the production of GMO crops and to curb the use of toxic pesticides. 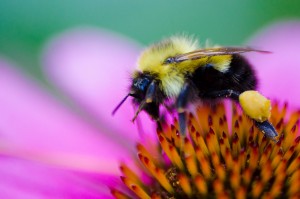 The language of the resolution, sponsored by Councilman Mike Kelly, cites the health of honey bees and other insects as one of the main reasons for encouraging citizens to refrain from the use of pesticides in the practice of lawn care and beautification. It also specifically names neonicotinoids as a pesticide that should be avoided. When asked what prompted Mr. Kelly to propose the resolution, he said Â “[o]ur pesticide journey began with a simple question about how the City of Plattsburgh was using neonicotinoids to control pests. It turned out a city employee is a beekeeper and he thanked the City Council for bringing this issue forward. He told us that the combination of GMO seeds and pesticides was killing pollinating insects at alarming rates.”

Neonicotinoids Â affect the central nervous system of insects and have Â consistently been implicated Â as a key factor Â in pollinator declines, not only Â linked to acute exposure and Â immediate bee deaths, but also sublethal exposure that adversely affects Â bee reproduction, navigation, and foraging. The science has become increasingly clear that pesticides, either working individually or synergistically, Â play a critical role Â in the ongoing decline of honey bees. Pesticide exposure can impair both detoxification mechanisms and immune responses, rendering bees more susceptible to viruses, parasites, and other diseases, and leading to devastating bee losses. By encouraging citizens and department heads to refrain from using neonicotinoids, the City of Plattsburgh is taking a commendable step to help protect these vulnerable pollinator populations.

The use of glyphosate, a pesticide recently determined by the International Agency for Research on Cancer (IARC) to be a carcinogen in laboratory animal studies is also targeted in this resolution. Citing increased negative health effects, such as cancer, birth defects, Alzheimerâ€™s disease, Parkinsonâ€™s disease, kidney failure, and autism, the resolution encourages citizens and city departments to refrain from using glyphosate in agricultural and commercial applications. Produced and sold as Roundup by Monsanto, glyphosate is touted as a â€ślow toxicityâ€ť chemical and â€śsaferâ€ť than other chemicals by EPA and industry and is widely used in food production and on lawns, gardens, parks, and childrenâ€™s playing fields. However, the recent classification of glyphosate as a Group 2A â€śprobable carcinogenâ€ť indicates that this is anything but the case. In the absence of any action at the federal level by EPA to reevaluate glyphosateâ€™s classification, this resolution from Plattsburgh is an example of how local governments can start taking proactive measures to protect citizens from the harmful effects of this toxic pesticide. Â “Most every community in America is wrestling with the question of sustainability” said the councilman. “Will we have good food, clean water, clean air and a healthy environment for our children and grandchildren? It is clearly time to act to ensure the future. The City of Plattsburgh City Council unanimously supported an anti-pesticide/anti-GMO resolution as a building block to help us achieve and maintain a healthy future for our citizens.”

Finally, the resolution also focuses the use of GMOs, otherwise known as genetic engineering (GE), in crops, noting the growing list of nations around Â the world that have banned GMOs as a strong reason to reduce or eliminate their use within city limits, and it â€śencourages [â€ťÂ¦] neighboring jurisdictions to adopt policies discouraging the use of GMO crops.â€ť This policy is very timely, and indicates that local governments and the people they represent may have very different views on GMO use as compared to those acting at the federal level. Just last month the House of Representatives passed the Â Safe and Accurate Food Labeling Act of 2015, Â H.R. 1599, often referred to as the Â â€śDARKâ€ť Act for Denying Americans the Right to Know what is in their food by making it harder for the Food and Drug Administration (FDA) to require mandatory national labeling of genetically engineered organisms. This bill could have devastating ramifications for states, such as Vermont, that have passed laws requiring GE labeling, preempting their decisions to protect their citizens by providing them with as much information as possible about the ingredients in their food. While Plattsburghâ€™s resolution would not be affected by this bill, mainly because it is not binding to begin with, it does help highlight the vast discrepancies between members of Congress and public opinion, which, according to a recent Â study Â by Consumer Reports National Research Center shows that more than 70% of Americans said they do not want GE products in their food, and 92% of consumers believe that foods containing genetically engineered ingredients should be labeled. Â To fight back against this bill, Beyond Pesticides encourages individuals to take the time to let your Senators know that you oppose the DARK Act and support federally mandated GE labeling by clicking here Â to send a letter to your Senators through our website.

As far as creating change on a larger scale, Councilman Kelly believes that, despite its nonbinding nature, the resolution will impact other communities outside the city of Plattsburgh. When Beyond Pesticides reached out to ask him what the broad reaching goals of this resolution were, he replied Â “[w]e hope our actions will encourage our elected officials in neighboring municipalities and at the state and federal levels to examine this issue more closely. Jurisdictions across the nation and in Canada are adopting similar measures. Countries around the world are instituting outright bans on GMOs and pesticides. Maybe our actions at the local level will encourage our state and federal legislators to do the right thing. Grassroots efforts effectively shut down fracking in New York state. Maybe we can do the same with pesticides and GMO’s.”

When it comes to protecting pollinators, Beyond Pesticides has long advocated a regulatory approach Â that prohibits high hazard chemical use and requires alternative assessments. The City of Plattsburghâ€™s resolution is an exemplary effort to limit the use of these highly toxic pesticides and encourage citizens and city entities alike to pursue alternatives that promote human health and safety. This resolution is in line with an Â approach that rejects uses and exposures deemed acceptable under risk assessment calculations, and instead focuses on Â safer alternatives that are proven effective, such as Â organic land management, which, of course, prohibit the use of neonicotinoid and encourage individuals to Â Bee Protective.

This entry was posted on Wednesday, August 12th, 2015 at 12:01 am and is filed under Alternatives/Organics, Announcements, Chemicals, Contamination, Genetic Engineering, Glyphosate, Increased Vulnerability to Diseases from Chemical Exposure, Litigation, National Politics, neonicotinoids, New York, Pesticide Regulation, Pollinators, State/Local. You can follow any responses to this entry through the RSS 2.0 feed. You can skip to the end and leave a response. Pinging is currently not allowed.