(Breaking News, October 6, 2015, Washington, DC) The largest county in the country to act to ban pesticides will forbid toxic pesticides on public and private land within its jurisdiction, based on legislation passed today by a 6-3 vote. The ban, an historic public health measure, will protect one million people in a county outside Washington DC, as it allows time for transition, training, and a public education program over the next several years. 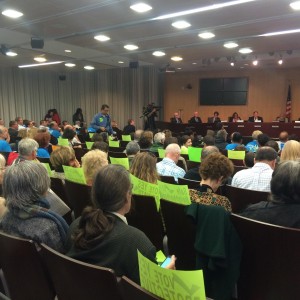 Maryland is one of seven states that has not taken away (or preempted) local authority to restrict pesticides more stringently than the state. The Montgomery County Parks Department has fought against the bill, suggesting that fields cannot be managed with organic practices. Extensive testimony on alternatives has educated council members on the viability of organic practices.

There is movement across the country to adopt ordinances that stop pesticide use on public property and, where allowed, private property. Pesticides when used move off the target site through drift and runoff, exposing non-target sites and people.

The legislation passed today is a major victory for public health and environmental protection. While the chemical lawn care industry strenuously opposed the bill, in testimony before the Council an industry spokesman said he could implement organic programs for his customers.

This entry was posted on Tuesday, October 6th, 2015 at 1:26 pm and is filed under Alternatives/Organics, Announcements, Maryland, National Politics, State/Local. You can follow any responses to this entry through the RSS 2.0 feed. You can skip to the end and leave a response. Pinging is currently not allowed.