Herbicides and Endocrine-Disrupting Chemicals Linked to Decline of Smallmouth Bass

(Beyond Pesticides, December 18, 2015) One of the most likely causes for the population decline of smallmouth bass in the Susquehanna River are endocrine-disrupting compounds and herbicides, concludes a multi-agency, multi-year study of one of the most complex river systems in Pennsylvania. The Pennsylvania Department of Environmental Protection (DEP) and the Pennsylvania Fish and Boat Commission (PFBC), along with nearly 50 participants and six partner agencies, released findings on Monday that narrow the likely causes from an initial field of 14 candidates to two. PFBC also found that pathogens and parasites are probable contributing factors. 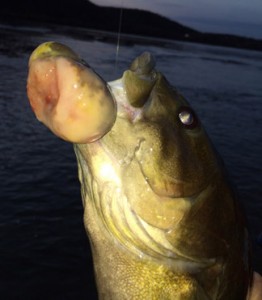 Following a smallmouth bass (SMB) population crash in 2005, and additional observed maladies, such as tumors and lesions on SMB, the team used ground-breaking monitoring strategies to collect more than 30,000 water quality records annually, along with review of existing research to isolate the possible causes keeping young-of-the-year (YOY) SMB from growing to adulthood. The study provides evidence to what Beyond Pesticides suspected back in May, when PFBC confirmed that a rare malignant tumor was found for the first time on a SMB caught by an angler back in the summer of 2014. Though the findings at the time did not point to a specific cause for the cancer found on the SMB, agricultural pesticides, particularly endocrine disrupting chemicals, that have been found in the watershed, likely play a part in the rampant disease issues in SMB in the Susquehanna River.

The next step is to focus on identifying the sources of the endocrine-disrupting compounds and herbicides, and what is causing the increased prevalence and lethality of the pathogens and parasites in smallmouth bass, including monitoring in the tributaries of the Susquehanna.

â€śWe know where the herbicides are being applied most heavily and we know that exposure to them is depressing the immune systems of the bass,â€ť said Fish and Boat Commission executive director John Arway to the Pittsburgh Post-Gazette. Â â€śWeâ€™re inching closer, but the DEP is still not willing to say itâ€™s the [farm] nutrients reaching the river.â€ť

The Susquehanna River flows from upstate New York, south through Pennsylvaniaâ€™s agricultural middle, and Maryland, and is the largest source of fresh water entering the Chesapeake Bay. Itâ€™s also a major source of agricultural runoff containing phosphorous, nitrogen and sediment pollutants, and natural animal hormones in manure, which could disrupt bass reproduction.

â€śThis study does not identify a single smoking gun,â€ť said John Quigley, DEP Secretary, in a press release. â€śBut it does point the way toward likely causes, which we will continue to pursue. On top of that, through this study, DEP staff developed new approaches to monitoring this complex system, dramatically increasing our water quality monitoring capacity in the Susquehanna River, and providing tools that we can use to ensure fishable, drinkable water statewide.â€ť

Last summer, research by the U.S. Geological Survey (USGS) showed a strong correlation between the occurrence of intersex characteristics on fish, which have been found in the Chesapeake Bay region, and areas of high agricultural use in Pennsylvania. Three species of fish were examined in three separate watersheds in the state to assess whether characteristics caused by hormones and hormone-mimicking compounds, such as immature eggs in male fish, were present. In aquatic environments, the presence of these intersex characteristics is widely used as a biomarker for assessing exposure to estrogenic chemicals, as well as anti-androgenic chemicals which inhibit development of male characteristics. Male smallmouth bass from all sites sampled had immature eggs in their testes; however, SMB in the Susquehanna drainage had a significantly higher prevalence and severity of these effects than sites in the Ohio drainage. When compared with Â the percentage of agricultural land use, which is higher in the Susquehanna, a link was established.

Fish and other aquatic organisms face numerous risks from pesticide exposures, even at low levels. In fact, USGS scientists identified pesticides as one of the contaminants in the Potomac River linked to Â intersex fish Â observed there. Â Atrazine, one of the most commonly used herbicides in the world, has been shown to affect reproduction of fish at concentrations below U.S. Environmental Protection Agencyâ€™s (EPA) water-quality guidelines. Concentrations of atrazine commonly found in agricultural streams and rivers have been associated with Â a reduction in reproduction and spawning, as well as tissue abnormalities.

In fish and humans, endocrine disrupting effects include direct effects on traditional endocrine glands, their hormones and receptors, such as estrogens, anti-androgens, and thyroid hormones, as well as signaling cascades that affect many of the bodyâ€™s systems, including reproductive function and fetal development, the nervous system and behavior, the immune and metabolic systems, the liver, bones and many other organs, glands and tissues. Hundreds of scientific articles have been published across the globe demonstrating how a broad selection of chemicals can interfere with the normal development at all ranges of exposure. Scientists discovered effects for some widely used chemicals at concentrations thousands of times less than federal â€śsafeâ€ť levels of exposure derived through traditional toxicological tests. Whatever the exposure level, neither fish nor human are protected from most endocrine-disrupting chemicals present in our waterways.

Beyond Pesticides continues to fight to Â prevent water pollution and harmful agricultural practices. Visit our Threatened Waters page and learn how organic land management practices contribute to healthy waters in the article, â€śOrganic Land Management and the Protection of Water Quality.â€ť

This entry was posted on Friday, December 18th, 2015 at 12:00 am and is filed under Announcements, Aquaculture, Atrazine, Chemicals, Disease/Health Effects, Endocrine Disruption, Pennsylvania, Pesticide Residues, State/Local, Water, Wildlife/Endangered Sp.. You can follow any responses to this entry through the RSS 2.0 feed. You can skip to the end and leave a response. Pinging is currently not allowed.