(Beyond Pesticides, March 28, 2016) In the first test of a landmark beekeeper compensation law that works to protect beekeepers from the effects of toxic pesticides on their hives, Minnesota has recently compensated two beekeepers for pesticide drift that killed their bees. Investigators from the Minnesota Department of Agriculture (MDA) have confirmed what beekeepers and environmentalists have been saying: Even when pesticides are used in accordance with the label and the law, they can be acutely toxic to bees in everyday circumstances. 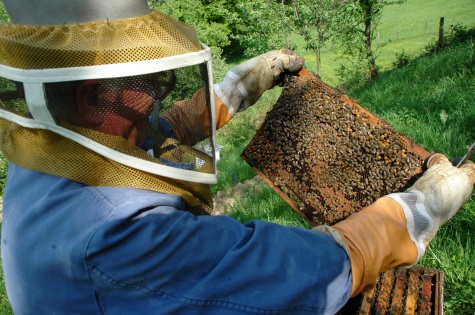 Pam Arnold, an organic farmer who manages hives on her property, and Kristy Allen, another beekeeper who shares the same bee yard, were the first two beekeepers to actually receive compensation through the beekeeper compensation law. Last spring, a farmer across their road planted neonicotinoid (neonic) coated corn seeds on a windy day, resulting in the death of their bees as toxic dust from planting drifted on to their property. Tests performed by MDA during the investigation found acute levels of clothianidin in the dead bees, even days after the incident. Nearby dandelion weeds also showed significantly higher concentrations of the toxin. According to the MDA website, the case closing letter was sent in November 2015, but they released their annual investigation summary for 2015 last Wednesday. Since 2014, MDA has investigated 10 complaints from beekeepers, but these two were the first to be compensated for their losses under the law, according to a representative of the MDA Pesticide and Fertilizer Management Division. This demonstrates how difficult it can be to prove that pesticide drift has contributed to bee deaths, harm or contamination.

When farmers plant pesticide-coated seeds using a mechanical seeder, lubricants used to keep the Â seeds from sticking to the planter mechanism become contaminated and are expelled from the equipment as fugitive dust. The dust contaminates nearby plants. Â A 2012 Â study found that high amounts of neonicotinoids are present in the exhaust of corn seed planters and that bees are exposed to these potentially lethal concentrations of the chemical simply by flying through the area during planting.

Neonicotinoids like clothianidin have been found by Â a growing body of scientific literature Â to be linked to honey bee and pollinator decline. A Â study Â performed by the Food and Environment Research Agency (FERA) in the United Kingdom provides evidence confirming the link between neonicotinoid pesticides and continually increasing honey bee colony losses on a landscape level. Â Along with recent reports and studies highlighting the role these chemicals play in pollinator decline, there is evidence that the use of neonicotinoids are not efficacious or even necessary in agriculture. In August 2015, figures for the first oilseed rape harvest since the European-wide ban was introduced showed that the yield was higher than the average for the previous decade, when the chemicals were used on the majority of oilseed rape grown in the UK. Â  In 2014, the U.S. Environmental Protection Agency (EPA) released a report Â concluding that soybean Â seed treatments with neonicotinoid insecticides provide little or no overall benefits in controlling insects or improving yield or quality in soybean production. Â The seed treatment market has more than tripled in size between 1990 and 2005, with neonicotinoids making up 77 percent of the market share.

Although Ms. Arnold and Ms. Allen were compensated for their loss, there was no violation of state or federal law, according to officials. Seed coatings are not considered a pesticide application like spraying because farmers buy the seed ready to plant, and the pesticide application process occurs at the distribution and processing center for the seeds. According to Ms. Allen, who also owns a Minneapolis honey company, this signals a significant failure in pesticide law. â€śThe fact that MDA is compensating me for something that is not illegal is crazy to me,â€ť she told the Star Tribune. â€śIt means something is broken.â€ť

Neonicotinoids, like imidacloprid, clothianidin, and thiamethoxam, have already been given a two-year moratorium Â in the European Union (EU). Despite calls for similar action from beekeepers and environmentalists, U.S. and Canadian officials have refused to follow suit. Although there has been some Â success in the form of local ordinances in the U.S. Â and Ontario, Canada, as well as policy shifts within some U.S. federal agencies, a Â Canadian beekeeper lawsuit demonstrates the desperation of beekeepers everywhere seeking relief on a broader scale.

In the U.S. courts, Beyond Pesticides, Center for Food Safety, Pesticide Action Network North America, and U.S. beekeepers filed a lawsuit against EPA in 2013 calling for a ban on clothianidin and thiamethoxam. The lawsuit is still ongoing. States are also pushing for the right to regulate these toxic substances. In mid-March 2016, the Vermont House of Representatives passed a bill (H.861) that authorizes state Â regulation of pesticide-treated products, Â including coated seeds, that are exempt from federal pesticide regulations. H.861 is the latest in a string of laws introduced to address the impact of harmful neonicotinoid insecticides Â on ecology and agriculture, and symbolizes a concentrated effort to reverse pollinator declines within states.

This entry was posted on Monday, March 28th, 2016 at 12:00 am and is filed under Announcements, Chemicals, Minnesota, neonicotinoids, Pesticide Drift, Pollinators, State/Local. You can follow any responses to this entry through the RSS 2.0 feed. You can skip to the end and leave a response. Pinging is currently not allowed.