(Beyond Pesticides, June 14, 2016) A new report released yesterday by the Environmental Working Group (EWG) has found that up to 420 known or likely carcinogens have been measured in a diverse array of populations, and that exposure to these carcinogens is not limited to on-the-job contact with industrial chemicals, including pesticides. According to the National Cancer Institute, an estimated 1.7 million new cases will be diagnosed in the U.S. in 2016. While some of these cases may be due to genetic makeup, others may be caused by substances in the air, soil, food and other materials in our environment. 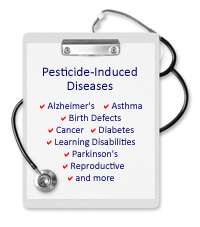 Through a review of scientific literature and publicly available biomonitoring studies, EWG compiled a comprehensive inventory of known or likely carcinogens that have been measured in people. According to the EWG report, data from the National Health and Nutrition Survey, or NHANES, conducted annually by the Centers for Disease Control and Prevention, confirms that many of these carcinogens are in the bodies of Americans not at risk of occupational exposure â€” indeed, at any given time some people may harbor dozens or hundreds of cancer-causing chemicals. Over half of the people tested had levels of arsenic and acrylamide in their bodies high enough to give them a more than 1 in 10,000 risk of cancer. Arsenic is used in certain pesticides, and acrylamide is sometimes found in food packaging and certain foods â€ťâ€ťpotato chips and French fries have been found to have higher-than-average amounts of it. Other commonly found chemicals included benzene, found in petroleum, and DDT and DDE pesticides.

â€śThe presence of a toxic chemical in our bodies does not necessarily mean it will cause harm, but this report details the astounding number of carcinogens we are exposed to in almost every part of life that are building up in our systems,â€ť said Curt DellaValle, author of the report and a senior scientist at EWG in a press release. â€śAt any given time some people may harbor dozens or hundreds of cancer-causing chemicals. This troubling truth underscores the need for greater awareness of our everyday exposure to chemicals and how to avoid them.â€ť

One chemical that has recently been in the spotlight is glyphosate, classified as a probable carcinogen based on animal and epidemiological studies by the World Health Organizationâ€™s International Agency for Research on Cancer. Glyphosate residues have been detected in foods and products that are not typically associated with heavy glyphosate use. In March 2016, Â Moms Across America released a report Â on glyphosate residues in California wines. The Â report Â found Â that all of the ten wines tested positive for glyphosate. Other recent reports of the widespread presence of glyphosate residues find the chemical in Â breast milk, Â in German beers, Â feminine hygiene products, and Â bread, as well as Â in nearly 100% of Germans Â tested.

When talking about cancer, it should be noted that Congress in 1958 adopted the Delaney Clause, named for its sponsor Rep. James Delaney (D-NY), which sought to prohibit cancer causing pesticides in food. While just beginning to be implemented in the 1990s, the provision was repealed in part with the adoption of risk assessment language in the 1996 Food Quality Protection Act (FQPA), passed by Congress to amend both the Federal Insecticide, Fungicide and Rodenticide Act and the Federal Food Drug and Cosmetic Act. We cannot fully understand safety without discussing the limits of risk assessment methods that are used to determine â€śacceptable exposureâ€ť or â€śnegligible risk.â€ť The FQPA requires the Environmental Protection Agency (EPA) to consider available data on the sensitivity of children and other people to pesticides, provide for an extra margin of safety when data is not available, and begin adding up the cumulative impact of exposure to the residue of a single pesticide in all food and water. The act does not require an evaluation of combinations of chemicals or the possible synergistic effects between chemicals, and leaves to the discretion of EPA wide latitude in defining acceptable risk.

The EWG report also outlined research from the Halifax Project, which looks at the potential risks of chemical combinations. In February 2016, a University of California, Los Angeles study found that pesticide mixtures are more harmful that individual pesticides. Pesticide products available for sale are often chemical mixtures of active ingredients that create a cocktail of toxins while studies on pesticide combinations have demonstrated neurological, endocrine, and immune effects at low doses. For example, research conducted by Warren Porter, PhD., professor of zoology and environmental toxicology at the University of Wisconsin, Madison, examined the effect of fetal exposures to a mixture of 2,4-D, mecoprop, and dicamba exposure â€ťâ€ťfrequently used together in lawn products like Weed B Gone Max and Trillionâ€ťâ€ť on the motherâ€™s ability to successfully bring young to birth and weaning. Researchers began by testing pesticide concentrations diluted to levels that are considered â€śsafeâ€ť by the U.S. Environmental Protection Agency (EPA). The results were striking: Dr. Porter found that, â€śThis common lawn pesticide mixture is capable of inducing abortions and resorptions of fetuses at very low parts per billion. The greatest effect was at the lowest dose.â€ť For more information on pesticide synergy, see Synergy: The Big Unknowns of Pesticide Exposure.

What Can You Do?

EPAâ€™s risk assessment process fails to look at chemical mixtures and synergistic effects, as well as certain health endpoints (such as endocrine disruption), disproportionate effects to vulnerable population groups, and regular noncompliance with product label directions. These deficiencies contribute to its severe limitations in defining real world poisoning, as captured by epidemiologic studies in Beyond Pesticidesâ€™ Pesticide-Induced Diseases Database.

Now, it is the growth of organic practices and products that is outpacing regulation in shifting us away from cancer causing chemicals and pesticides. Beyond Pesticides advocates for a regulatory approach Â that prohibits high hazard chemical use and calls for alternative assessments. The organization Â suggests an approach that focuses on Â safer alternatives that are proven effective, such as Â organic agriculture. Thus, the best way to avoid pesticide residues in a wide range of food and drinks is to buy and support organic agriculture and the USDA organic label over conventional agriculture. Beyond Pesticidesâ€™ Â database, Eating With a Conscience (EWAC), Â provides information on the pesticides that could be present in the food we eat, and why food labeled organic is the right choice. EWAC also includes information on the impacts chemical-intensive agriculture has on farm workers, water, and our threatened pollinators.

This entry was posted on Wednesday, June 15th, 2016 at 12:00 am and is filed under Announcements, Cancer, Disease/Health Effects, Pesticide Regulation. You can follow any responses to this entry through the RSS 2.0 feed. You can skip to the end and leave a response. Pinging is currently not allowed.