(Beyond Pesticides June 20, 2016) As the end of the school year approaches, two first grade classrooms at local District of Columbia Public Schools (DCPS) got to learn about the importance of pollinators firsthand when DC-based nonprofit Beyond Pesticides visited their school. In a lead up to National Pollinator Week, Beyond Pesticides teamed up with owner and founder of The Bees Waggle, Jessica Goldstrohm, to provide a fun, hands-on lesson about pollination, and why it is important to our food system. Students were given a lesson on biodiversity, soil health, and the negative effects of pesticides on pollinators before building some pollinator-friendly habitat for their schools and homes.

The day of learning kicked off at Brightwood Education Campus, located in Northwest DC, where students listened to a lesson developed by Ms. Goldstrohm, who donned a set of bee wings for the event. After receiving some background on the role of pollinators in our food system, the children participated in several hands on activities that reiterated the key points within the curriculum. Six volunteers stepped to the front of the class to demonstrate the interconnectedness of all living organisms by participating in a biodiversity web simulation. Here, the scholars learned that if one organism in a food system starts to take more than its fair share of resources, the rest of the web find itself out of balance. At the end of the lesson, students each crafted their own small â€śbee hotelâ€ť before heading outside to plant a butterfly box in their garden. 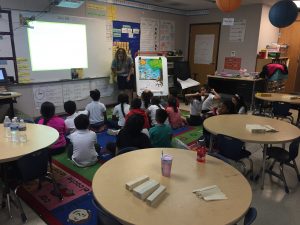 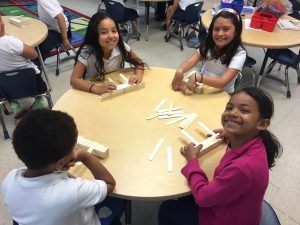 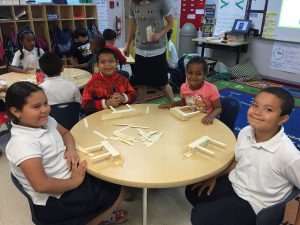 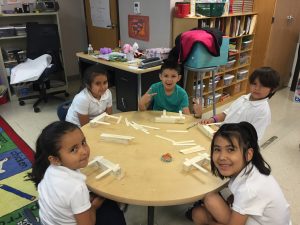 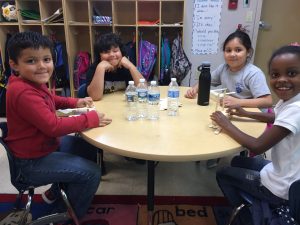 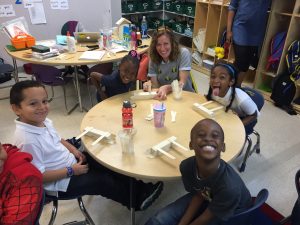 This box will serve as nesting habitat for migrating butterflies, including the monarch, which have experienced rapid population declines over recent years. Loss of habitat around Â genetically engineered (GE) cropland, as well as increasingly warm temperatures are responsible for these declines, according to scientists who say populations are the lowest they have seen in two decades. Additionally, in 2015 new research from the University of Minnesota presented some of the first evidence linking the bee-killing insecticides known as neonicotinoids to monarch butterfly deaths. The study found that milkweed plants, which monarch butterflies need to survive, may also retain neonicotinoids from nearby plants, making milkweed toxic to monarchs. 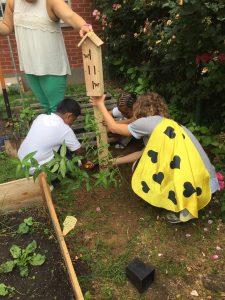 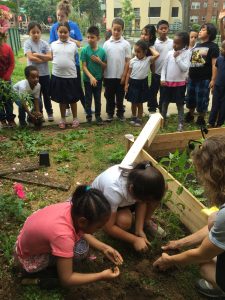 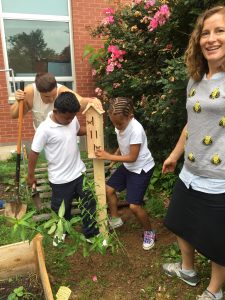 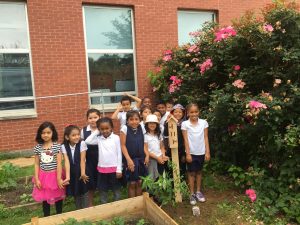 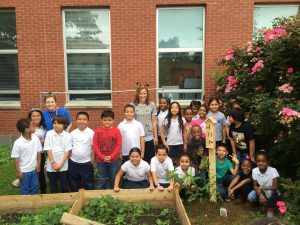 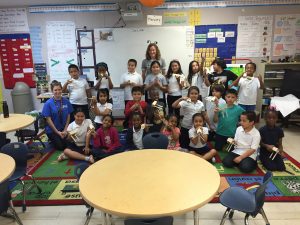 Later in the day, the educational team moved to Northwest DC where they visited first grade scholars at J.O. Wilson Elementary School. Here the children received a similar lesson, this time dividing into groups to apply the information they had learned to solve puzzles about food systems. Working as a team, the students had to figure out how to place several pictures in an order that would represent how a food system worked from start to finish. For example, one puzzle began with a bee, who then pollinated clover seeds, allowing that clover to grow and be fed on by a cow, who eventually provided milk for humans to drink. The children enjoyed using their critical thinking skills to figure out the role of pollinators in providing food, and used that knowledge to draw connections between pollinators and themselves.

The visit to J.O. Wilson was highlighted by the building of a large bee hotel for the school garden. Bee hotels provide natural habitat for native bees, such as the leafcutter and mason bee. These bees are known as â€śsolitary beesâ€ť because they make individual nest cells for their larvae, as opposed to living in colonies like the honeybee. They typically nest in small holes or tunnels, and so Beyond Pesticides staff created a hotel structure into which the students placed pieces of wood with holes in them for the bees to use as nesting sites. The class worked together to create a welcoming habitat for native pollinators, and even got to help hammer on the protective screens, which was a huge hit (pun intended). The hotel found a permanent home in the schoolâ€™s fruit and vegetable garden, where it will help facilitate the pollination of those plants for years to come. 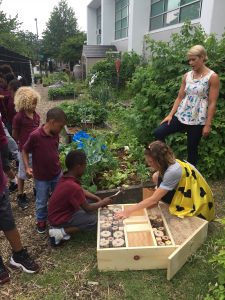 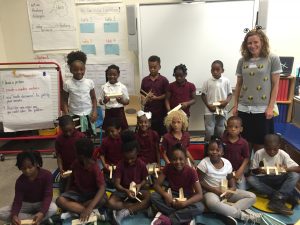 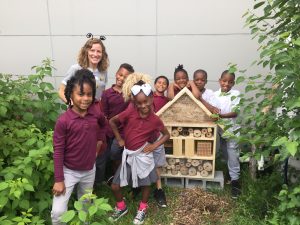 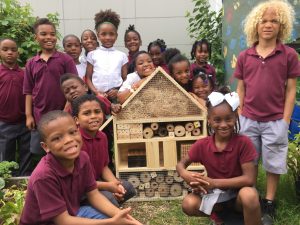 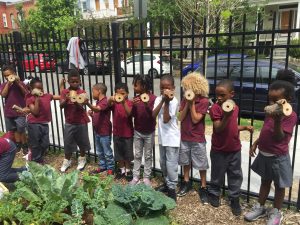 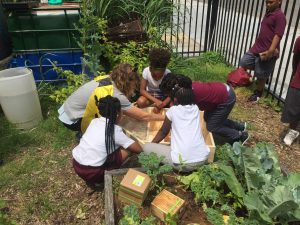 Educating local school children is just one of the many ways Beyond Pesticides is honoring pollinators this month. With National Pollinator Week kicking off today, there are several other events throughout the week designed to promote the work Beyond Pesticides does to protect pollinator health and combat their declines. See below for several ways you can get involved.

1) Support Pollinators and D.C. Restaurants through Â the ‘Made By Â Pollinators’ Campaign.
With one out of every three bites of food reliant on bees, restaurants participating in the ‘Made By Pollinators‘ campaign have created a special menu featuring pollinator-friendly food and will be providing customers with information on what they can do to help pollinators. The restaurants hope to increase public awareness on the importance of pollinators and steps that can be taken to reverse the decline.

Participating Â restaurants include Busboys and Poets, Founding Farmers, Lavagna, the Tabard Inn and Restaurant Nora. Have a great meal and save the bees!

Find out more by checking out our ‘Made By Pollinators’ Facebook Event Page!

2) Attend the *FREE* ‘Made By Pollinators’ Event at Busboys and Poets at 5th & K!
Join Beyond Pesticides and our beekeeping allies and experts from the Keep the Hives Alive tour for a National Pollinator Week event focused on declining pollinator populations and the impact of their loss on our food system, with video screening and discussion. The event takes place at Busboys and Poets on 5th and K St NW on Wednesday night, June 22nd from 6:30pm to 8:00pm.

Let us know if youâ€™ll be attending. Please RSVP on Facebook.

3) Help ‘Keep the Hives Aliveâ€™
On Wednesday, June 22nd at 1:30 pm in front of EPA HQ, Beyond Pesticides and our allies will be calling on EPA to take immediate action on harmful uses of toxic pesticides to protect bees, butterflies, birds, bats and other pollinators as well as farmers, beekeepers, farmworkers, and consumers.

The rally will be the last stop on the Keep the Hives Alive tour, and will feature local, regional, and national speakers, including beekeepers from across the country, and local progressive business leaders Â Nora Pouillon of Restaurant Nora’s and Scott Nash of Â MOM’s Organic Market.

At the rally, weâ€™ll deliver sealed containers of dead bees to EPA, making it clear that we need immediate action to save these essential pollinators.

If you haven’t yet, please sign our petition to EPA today!

For more information on what you can do to protect pollinators, see Â www.beeprotective.org.

This entry was posted on Monday, June 20th, 2016 at 12:02 am and is filed under Announcements, Children/Schools, Habitat Protection, Pollinators, State/Local, Take Action, Washington D.C.. You can follow any responses to this entry through the RSS 2.0 feed. You can skip to the end and leave a response. Pinging is currently not allowed.