(Beyond Pesticides, August 5, 2016) Concerned health officials in Miami, Florida are investigating suspicions that Zika-spreading mosquitoes have become resistant to the pesticides commonly used synthetic pyrethroid insecticides used in mosquito control. As the region works to contain a Zika outbreak in northern Miami, officials are beginning to recognize that broadcast pesticide applications are not effective at controlling populations, and are looking into cases in the U.S. ┬áand in other parts of the world of mosquitoes developing resistance to chemical controls, or whether other factors are at work. At the same, the broadcasting of the pesticides by truck and plane and the resulting exposure to people and the environment also raise serious health issues. 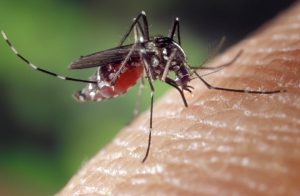 The Aedes aegypti mosquito, which has the ability to live indoors and reproduce even in tiny pools of water, is the primary way the Zika virus is spread, although there are reports that the disease can also be transmitted through sexual contact. Zika virus has been linked to cases of microcephaly, in which babies are born with underdeveloped brains. The virus has been detected in several Latin American countries, including Brazil where the outbreak was first observed and linked to increased cases of microcephaly. However, locally transmitted cases are now being reported in southern Florida.

In response, mosquito control officials have been stepping up pesticide applications using an arsenal of chemicals that usually include pyrethroids and organophosphates adulticides. It has also been reported that the organophosate Naled is being used in Florida. However, the efficacy of adulticidal pesticide applications (aerial or ground spraying) has been called into question over the years. Usually, this is the least efficient mosquito control technique that only targets adult mosquitoes. Further, the drifting spray impacts other non-target organisms – including humans who may suffer from rashes, headaches, and respiratory symptoms – ┬ápollinators, birds, fish and amphibians.

ÔÇ£Aggressive mosquito control measures don’t seem to be working as well as we would have liked,” ┬áCenters for Disease Control (CDC) Director ┬áTom Frieden, MD, MPH, recently said after 10 additional Zika cases were announced. According to news reports, he pointed out that it was unclear if the insects themselves are biologically resistant to the chemicals used in common insecticides used or if there were other environmental factors like standing water that was not visible that lead to the mosquito population bouncing back. Dr. Frieden also said an expert was investigating the mosquitoes to test if they are genetically resistant to pesticides but that it could take weeks to get the findings.

The case has highlighted a problem health departments and mosquito control districts have increasingly been dealing: some mosquito species are becoming resistant to pesticide. In the Florida Keys, the local mosquito control district has been looking at new ways to diminish mosquito populations as some of the 46 species present have become more resistant to pesticides. Already the Aedes aegypti mosquito is showing resistance to the synthetic pyrethroid pesticide, ┬ácommonly used in mosquito control. William Schaffner, MD, an infectious disease expert at Vanderbilt University Medical Center, said the Aedes aegypti mosquito is especially hard to combat for multiple reasons. “There’s a history of Aedes being relatively resistant to conventional pesticide,” Dr. Schaffner said. “When we say they’re resistant that means the mosquito inherently can shrug off the pesticide.”

Mosquitoes have very short life cycle (a week or less), increasing the probability that each succeeding generation is an opportunity for random mutations to occur that predispose a group of mosquitoes to be immune to pesticides. According to entomologist Dino Martins, PhD, in an interview with the Guardian newspaper, ÔÇ£[W]hen you use chemicals, you are actually applying a selection pressure on mosquito populations that will drive them to become resistant.ÔÇØ Already there is ┬áemerging resistance to insecticides among ┬áAnopheles ┬ámosquitoes. Additionally it is impossible to fumigate every corner of habitat where mosquitoes might breed. According to Dr. Martins, the explosion of mosquitoes in urban areas, which is driving the Zika crisis, is caused by a lack of natural diversity that would otherwise keep mosquito populations under control, and the proliferation of waste and lack of disposal in some areas which provide artificial habitat for breeding mosquitoes.

Most experts agree that an efficient mosquito management strategy emphasizes public awareness, prevention, and monitoring methods. However, if these methods are not used properly, in time, or are ineffective, communities must decide whether or not to use pesticides. They must determine if they should risk exposing vulnerable populations to potentially harmful diseases caused by mosquitoes or to chronic or deadly illnesses caused by pesticides.

Beyond Pesticides believes ┬áthe ideal ┬ámosquito management strategy ┬ácomes from an integrated approach that emphasizes education, aggressive removal of standing water sources, larval control, monitoring, and surveillance for both mosquito-borne illness and pesticide-related illness. Control of disease-carrying mosquitoes can be successful when emphasis is placed on public education and preventive strategies.

Individuals can take action by eliminating standing water, introducing mosquito-eating fish, encouraging predators, such as bats, birds, dragonflies and frogs, and using least-toxic larvacides. Community based programs should encourage residents to employ these effective techniques, focus on eliminating breeding sites on public lands, and promote monitoring and action levels in order to determine what, where, and when control measures might be needed. Beyond PesticidesÔÇÖ ┬áMosquito Management ┬áprogram page has a list of resources that can help you and your community safely manage mosquitoes, including ┬áleast-toxic mosquito repellents, bed nets, and proper clothing that can be used to keep mosquitoes safely at bay.

All unattributed positions are that of Beyond Pesticides.

This entry was posted on Friday, August 5th, 2016 at 12:00 am and is filed under Announcements, Florida, Mosquitoes, National Politics, Pesticide Residues, Pests, State/Local. You can follow any responses to this entry through the RSS 2.0 feed. You can skip to the end and leave a response. Pinging is currently not allowed.