(Beyond Pesticides, September 13, 2016) Land suitable for commercial beekeepers in the U.S. Northern Great Plains (NGP) is declining rapidly, according to a new study released earlier this month by the U.S. Geological Service (USGS). The region, which supports over 40% of managed honey bee colonies, is quickly replacing suitable pollinator habitat with more and more pesticide-intensive biofuel crops, particularly corn and soybean, as a result of increased crop prices and federal subsidies for biofuels. The concerning trend adds another layer of stress not only to honey bee colonies, but beekeepers whose livelihood depends on the health of their commercial livestock. 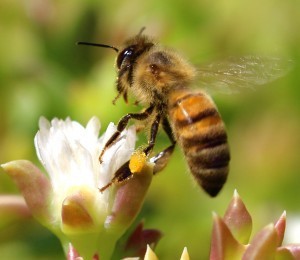 From early summer to mid-fall, roughly one million honey bee colonies make their way through the Northern Great Plains of North and South Dakota. The area is not usually a stop for pollination services, but a place where beekeepers go to generate a honey crop and improve the health of their colonies. Most of the colonies that summer in the NGP are trucked across the country to pollinate fruiting crops like apples, cherries, melons, and almonds during the winter, or are otherwise moved south to produce packaged bee colonies or queens. According to the USGS study, published in the Proceedings of the National Academy of Sciences, NGP has long been used by beekeepers as an unofficial refuge for commercial production because of its large area of pollinator-friendly habitat: uncultivated pasture and rangelands, and cultivated flowering crops like sunflower, canola, and alfalfa.

However, increased production of biofuels, driven by policy changes that subsidize the planting of soy and corn, rising prices of these crops, and reductions in conservation programs in Â the recent Farm Bill all add up to a significant shift in the landscape of the NGP. Researchers note that 1.6 million acres of land in North Dakota originally enrolled in the U.S. Department of Agricultureâ€™s Conservation Reserve Program have been lost.

Although the study does not attempt to link land use changes with pollinator health criteria, it is clear Â that these changes do not benefit pollinators. Corn and soy biofuels are often produced with seeds that are coated in neonicotinoids, a class of highly toxic, systemic and persistent chemicals that multiple studies and sources, beekeepers, and scientists have linked to declines of both wild and managed bees. Neonicotinoids have been linked to a range of both acute and chronic effects on pollinators. Studies have found the insecticides can adversely affect reproduction, impair pollination, and alter behavior. Once these chemicals are used in the environment, their persistence and long half-life means that they remain a problem for beekeepers well into the future. A study published earlier this year found that even when attempting to protect pollinators by planting pollinator habitat and hedgerows around conventional farms, neonicotinoids used onsite can make their way into flowering crops in field margins, putting pollinators in danger.

Replacing uncultivated and flowering crops with biofuels adds additional problems for pollinators. Because most biofuels planted today are also genetically engineered, managed and wild pollinators will continue to lose habitat, as these crops are developed to withstand the use of herbicides, such as glyphosate, and the use of genetically engineered (GE) herbicides continues to increase. Widespread applications of glyphosate to cropland has been implicated in the destruction of pollinator habitat, particularly the monarch butterfly, whose migration route winds through the middle of the U.S.

It is evident that restoring pollinator populations across the country is a complex undertaking that will require a change not only in public policies and incentives for farming, but also chemical-intensive Â farming practices. While biofuel subsidies are acting to displace critical pollinator habitat, what is also true is that there are farming systems currently in practice that can grow healthy food, and provide safe, pesticide-free pollinator-friendly habitat at the same time. Jonathan Lundgren, PhD, acclaimed researcher who blew the whistle on USDAâ€™s suppression of scientific findings, is now working to restore sound agricultural practices that protect bees on their Â property, Blue Dasher Farm, in South Dakota. As Dr. Lundgren noted in his talk to the 34th Â National Pesticide Forum in Portland, ME this year, the Â focus must be on healing the soil and changing on-farm management practices in order to address and reverse the bee problem and our broader biodiversity crisis. Consumers can assist in these efforts by supporting s
afer agricultural practices and only purchasing products certified organic. Under organic certification, farmers are required to maintain or improve the health of the soil, and through defined criteria and a public process under the NOSB, are prohibited Â from using highly toxic, systemic, and persistent pesticides such as neonicotinoids.

This entry was posted on Tuesday, September 13th, 2016 at 12:00 am and is filed under Alternatives/Organics, Biofuels, Habitat Protection, Increased Vulnerability to Diseases from Chemical Exposure, National Organic Standards Board/National Organic Program, Pollinators, Uncategorized. You can follow any responses to this entry through the RSS 2.0 feed. You can skip to the end and leave a response. Pinging is currently not allowed.