(Beyond Pesticides, January 10, 2017) Exposure to neonicotinoid (neonic) insecticides leads to a decrease in pollination frequency and fewer social interactions in bumblebees, according to research published by scientists from Harvard University and University of California, Davis. The study, released last year but presented this week at the Society for Integrative and Comparative Biologyâ€™s annual meeting, underscores the need for regulators and policy makers to eliminate use of these chemicals, not only to protect honey bees, but also wild pollinators like the bumblebee.

While worker bumblebees (Bombus impatiens) divide their tasks within the colony in a similar manner to honey bees, their nests appear quite different than their more structured cousins. “Bumblebee nests are not the organized, beautiful geometry of the honeybee,” said James Crall, PhD candidate in Harvard’s Department of Organismic and Evolutionary Biology. Instead, “They’re more a hodge-podge of food and larvae in a pile in the middle of the nest space.” 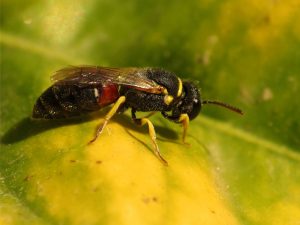 For their study, researchers placed four bumblebee colonies in a mesh enclosed area, tagged each bee, and observed them foraging on tomato flowers grown in a pollinator-excluding greenhouse (to ensure bees had freshly-opened flowers for pollination each day). After observing normal behavior, bees within each colony were then randomly assigned to ingest increasing levels of the neonic imidacloprid (0, 0.0515, 0.515, or 5.15Â ng of imidacloprid, respectively). Results show that workers exposed to imidacloprid tend to move toward the outside edge of the nest and spend less time caring for their brood (young).

Pollination by individual workers is also significantly affected by imidacloprid exposure, with pollinating worker bees less likely to resume foraging after being exposed. The morphology of the tomato flower makes it nearly impossible to be successfully pollinated by honey bees. Instead, bumblebees (and certain other wild pollinators) â€śsonicate,â€ť or buzz tomato plants by producing a vibration that shakes loose the plantâ€™s pollen. But researchers found that even at low and modest doses (0.515, or 5.15Â ng) neonic exposure makes pollination significantly less likely.

This study is simply the latest in a robust body of research showing harm to wild and native pollinators from neonicotinoid exposure. A study presented last year at the British Ecological Societyâ€™s annual meeting determined that the neonic thiamethoxam makes it more difficult for bumblebees to learn how to sonicate. Compared to a control group, neonic treated bumblebees failed to produce a strong vibration, leading to less pollen collection. The results of these collective studies help confirm research from Scottish investigators published 2015 showing that neonics harm the brain cells of bumblebees.

Scientists have shown that the effects of neonics go beyond the direct impact on pollination skills to the size of neonic-exposed bumblebee colonies. Colonies treated with the neonic clothianidin recorded fewer workers, drones, and reproductive female bees compared to colonies without exposure.

While this data is critically important in understanding the extent of the current crisis, it is imperative that advocates use this information to press for change. At the federal level, as the Fish and Wildlife Service has eliminated neonic use at national wildlife refuges out of precaution, the U.S. Environmental Protection Agency (EPA) represents a stark contrast, doing little to address the impact of these chemicals on undervalued and unprotected wild pollinators. When EPA reviewed the neonic imidacloprid for its impacts to pollinators early last year, the agency only analyzed honey bee health, despite the thousands of other unique, and potentially endangered wild pollinators that are likely to come into contact with these poisons.

Though disquieting for researchers and advocates alike, the fact is that EPAâ€™s decisions are made with considerations beyond the science at hand. In determining whether to restrict a chemical, public input weighs heavily. For those who support pollinator health and want to influence federal decisions on this issue, the best way to increase the pressure is to get active in your local community. Work to pass pesticide policies that protect both honey bees and wild pollinators, as numerous communities (see yellow boxes) have done. For assistance, contact Beyond Pesticides at [email protected].

This entry was posted on Tuesday, January 10th, 2017 at 12:00 am and is filed under Agriculture, Alternatives/Organics, Biodiversity, Chemicals, Environmental Protection Agency (EPA), Hydroponics, Imidacloprid, Increased Vulnerability to Diseases from Chemical Exposure, National Politics, Pesticide Drift, Pesticide Regulation, Pesticide Residues, Pollinators. You can follow any responses to this entry through the RSS 2.0 feed. You can skip to the end and leave a response. Pinging is currently not allowed.