(Beyond Pesticides, January 6, 2017) When it comes to pollination, bees tend to get all of the buzz. While they are crucial to pollinating many crops, it is important to note that bees arenâ€™t the only pollinators working hard to provide the ecosystem services we rely on to support our food system. In fact, one out of every three bites of food we take is made possible by pollinators. In order to raise awareness for the unsung pollinator heroes all around us, Beyond Pesticides created the Polli-NATION Campaign, which highlights the important work of a relatively unknown pollinator each month. With it, we will raise public awareness about these pollinators, their contribution to plant health and productivity and the preservation of natural resources, and the threats they face in their daily lives, including toxic pesticides and habitat loss.

Polli-NATION members include species like butterflies, wasps, flies, beetles, birds, bats, and more. By taking the time to read about our featured Polli-NATION pollinator, you will not only learn about the many diverse species we call pollinators, but also discover what you can do in your daily life to help ensure their survival. 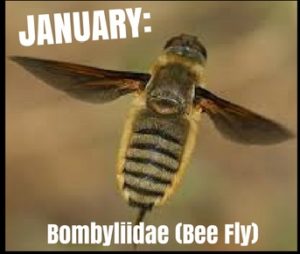 Our pollinator of the month is the bee fly! Over 5,000 species of Bombyliidae (Bee Flies), a large family within the order Diptera, can be found across the globe. While few of these species have been researched in great depth, they all have similarities that tie them to their classification. The vast majority of Bee Fly species have larvae that are parasitoids, and all adults feed on a diet of pollen and/or nectar, making them important pollinators.

Bee Flies have been discovered on every continent but Antarctica. The most diverse group of species can be found in semi-arid and arid (desert) environments such as western North America, southern parts of South America, along the equatorial lines of Africa, and the mid latitudes of Eurasia.

Most Bee Flies in their larval stage are parasitoids to the larvae of other soil-inhabiting insects. As opposed to parasites, which usually live off their host, but do not always cause death, parasitoids like the Bee Fly always kill their host. According to the World Catalog of Bee Flies, larvae of some Bombyliidae species prey on major agricultural pests, such as locusts, grasshoppers, armyworms, slugs, and caterpillars. However, select species have been found to be parasitoids of other pollinators like solitary bumblebees. And a small number species of Bee Fly larvae simply prey on insect eggs.

Most adult Bee Flies, once fully mature, feed on nectar from a variety of native flowering plants. Females are required to consume pollen in order to provide the protein and nourishment necessary for the development of eggs and reproduction. Bee Flies are thought to be responsible for what are called â€śpollination syndromes,â€ť meaning many native flowering plants coevolved and adapted with Bee Flies.

Adult Bee Flies are adapted for a pollen and nectar diet, and their physiology shows it. They have small bodies which range in length from 1mm to 2.5cm, depending on the species. Their wingspan can be as small as 1.5mm, though larger species can have a span of more than 60mm.Â  Many species utilize biomimicry, in terms of their coloration, often resembling bees (hence their common name as the Bee Fly) or wasps. This offers them protection, as their predators assume that they have the temperament of a more aggressive species. Nonetheless, some species simply have a solid coloration of grey or rusted brown. Bee Fliesâ€™ wings appear swept back when at rest, and their legs are generally long and skinny compared to their body, with bristles at the ends. Many Bee flies are equipped with a very long proboscis (tubes that enable them to lap up nectar) that allows them to collect nectar from flowers with long narrow floral tubes. The Bee Fliesâ€™ proboscis is fixed, and cannot be retracted, giving it a tusk-like resemblance.

Bee flies play an important ecological role as pollinators, particularly for flowering desert plants in the U.S. Southwest. Although the Bombyliidae family is understudied, the World Catalog of Bee Flies notes that because many flowering plants require Bee Fly pollination in order to propagate, some endangered plant species are likely reliant on the conservation of certain bee fly species. In addition to providing valuable pollinator services as adults, as noted earlier, Bee Fly larvae can play an important role in pest control. In addition to controlling agricultural pests like slugs and locusts, some species prey on the tste fly, which are infamous for their ability to transmit human diseases like trypanosomiasis, or sleeping sickness.

A literature review by the Bureau of Land Management (BLM) notes, â€śAt any single locality a population of bee flies may be considered to be endangered, but throughout the desert areas they may not appear to be so because of their apparent wide distribution.â€ť Because their interaction between specific flowers and certain Bee Fly species is so closely intertwined, habitat loss represents a significant threat to the Bombyliidae family. BLMâ€™s literature review provides an example of the importance of maintaining habitat in the Algodones Dunes near Imperial County, CA. Areas open to recreational vehicles like ATVs resulted in the loss of a majority of flowering plants. While Bee Fly numbers in these areas became locally extinct, areas adjacent to the recreational area maintained their population numbers.

Pesticides, particularly persistent, systemic neonicotonoid insecticides, also represent a serious threat to many Bombyliidae species. Because many species feed on agricultural pests, they are more likely to be exposed to pesticides in these areas. Although the impacts of neonicotinoids and other pesticides on wild pollinator species are understudied when compared to investigations on honey bees, research that has been performed is cause for concern.

How to Protect the Species

There are a few simple ways to protect Bee Fly populations. Providing habitat by planting native flowers is an important first step for Bombyliidae conservation. Providing native habitat is especially important for individuals in arid or semi-arid regions of the U.S. Southwest, and these flowers are relatively easy to maintain as they do not require a lot of water and there is plentiful sun.

It is also critical to avoid planting any seeds or flowers that may be coated in pollinator-toxic neonicotinoids, as these chemicals can undermine your intent to provide forage and habitat for wild pollinators. See Beyond Pesticidesâ€™ Pollinator Friendly Seed and Nursery Directory as a starting place. And for more information, see the webpage on Managing Landscapes with Pollinators in Mind. You can also get active in your community to protect these pollinators by holding native planting days in the spring, and advocating for changes to community pesticide policies. Lastly, by buying organic, you can support an agricultural system that eschews the use of toxic pesticides like neonicotinoids that harm native pollinators.

For more information on how you can get involved in pollinator conservation throughout the nation, see Beyond Pesticides BEE Protective webpage.

For citations on this information, see our Polli-NATION webpage.

This entry was posted on Friday, January 6th, 2017 at 12:00 am and is filed under Agriculture, Announcements, Chemicals, Grasshoppers, Habitat Protection, neonicotinoids, Pesticide Residues, Pests, Pollinators. You can follow any responses to this entry through the RSS 2.0 feed. You can skip to the end and leave a response. Pinging is currently not allowed.