(Beyond Pesticides, October 27, 2017) In a study published in the Journal of Agricultural and Food Chemistry, scientists at University of Massachusetts, 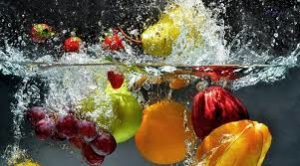 Amherst identify a novel approach to reduce toxic pesticide residues on conventional food. The method the authors describe is cumbersome and unlikely to be widely used by consumers. At the same time, study results confirm that eating organic products is the best way for individuals and families to eliminate pesticide residues from their diet.

For the current study, researchers looked at how much of two common pesticides, one, the fungicide thiobendazole, and the other, the insecticide phosmet, remained on apples after submersion for 24 hours. Both pesticides penetrated the skin of the apples, though thiobendazole, a systemic fungicide, made its way deeper into and past the appleâ€™s skin. Thiabendazole penetrated 80 micrometers into the apple while phosmet penetrated 20 micrometers.

Researchers looked at three different methods to reduce the pesticides on apples: tap water, a bleach solution, and baking soda. Compared to the others, baking soda was found to be by far the most effective method to reduce pesticide residue, with 80% of thiabendazole and 95% of phosmet removed. “If factory washing [with bleach] is already effective, then we don’t need to care about washing at home, right? But it turns out that factory-level washing is not effective,” said Lili He, PhD, co-author of the study and food scientist at the University of Massachusetts, Amherst to TIME. “At home, the simplest way to wash is with tap water, but we also found that just tap water is not that effective. To reduce further pesticide exposure, we suggest adding a little baking soda.” However, in order to see these results, apples had to be washed in the solution for 12 to 15 minutes; not a common practice for those looking to grab a quick bite.

Studies show that despite assurances that levels are below those which cause harm, classical toxicology testing required by the U.S. Environmental Protection Agency for pesticide registration does not adequately capture risk because of data gaps on mixtures, synergistic effects, and certain health endpoints, such as endocrine disruption. Endocrine disruption effects, whereby hormonal (testosterone or estrogen) mimics cause effects at minute doses during critical developmental phases of life, upend the oft-repeated and outdated idea that â€śdose makes the poison.â€ť Seminal work on endocrine disruption, published in Endocrine Reviews, is available in the open source literature for analysis.

Beyond the deficiencies of the pesticide review process is the fact that not all pesticides will penetrate or wash off food commodities in the same way as those in the study. For a deeper review of how systemic pesticides work their way into the food and environment, see Beyond Pesticides report in Pesticides and You, Cultivating Plants that Poison. Agricultural adjuvants, contained in most conventional pesticide formulations, are also likely to increase pesticide residues on food since many formulations are formulated to help pesticides adhere to plants and fruits.

As far back as 2006, studies have found that switching from a conventional to an organic diet is the most effective method of reducing pesticide exposure in oneâ€™s body. An early 2015 study found that, looking at nearly 4,500 people from across the country, those that reported eating organic fruits and vegetables, at least occasionally, has significantly less pesticide residue in their bodies than those who never ate organic. A study published in late 2015 tracked 40 children, moving them from a conventional to an organic diet, and tracking levels of pesticide metabolites in their urine. Overall, among the most frequently detected pesticides, metabolites of organophosphate insecticides decreased by nearly 50 percent when children were put on an organic diet, and levels of 2,4-D fell by 25 percent.

While some may seek to reduce pesticide residues, it is not clear that the reduction reduces risk when their is exposure to carcinogens, neurotoxicants, and endocrine disruptors. Since cost is always an issue, see our factsheet on eating organically affordably. See also, our article The Real Story on the Affordability of Organic Food. Beyond Pesticides strongly encourages consumers to vote with their food dollars and support organic systems that do not require risky amounts of toxic, synthetic pesticides in order to grow food. See our Organic program page for more information.

This entry was posted on Friday, October 27th, 2017 at 12:00 am and is filed under Uncategorized. You can follow any responses to this entry through the RSS 2.0 feed. You can skip to the end and leave a response. Pinging is currently not allowed.