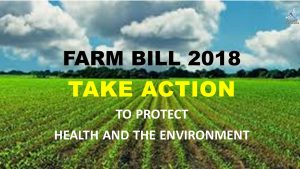 (Beyond Pesticides, June 26, 2018) On June 21, 2018, the controversial 2018 Farm Bill (H.R. 2) narrowly passed the U.S. House of Representatives 213 to 211 with provisions that will eliminate federal review of pesticide impacts on endangered species, undermine organic standards, and ease requirements regarding releases of pesticides into waterways. In May, the bill failed to pass when it got caught in the debate over immigration reform, but now this dangerous bill is much closer to becoming a major threat to the environment.

The bill, H.R. 2, the Agriculture┬Āand Nutrition Act of 2018, is a major win for the pesticide industry, which spent $43 million on lobbying this Congressional season, according to the Center for Biological Diversity. At the forefront are provisions that weaken the organic standards and the elimination of the requirement that the U.S. Fish and Wildlife Service (FWS) assess pesticide impacts on endangered species before U.S. Environmental Protection Agency (EPA) approves a pesticide for use. The bill also exempts those applying pesticides to lakes, streams, and rivers from having a permit under the Clean Water Act. This will allow indiscriminate contamination of waterways in spite of reports that pesticides are detected frequently and at environmentally relevant concentrations in U.S. waterways.

The House Farm Bill weakens organic standards with provisions that:

The bill is also controversial because of proposed changes to the Supplemental Nutrition Assistance Program (SNAP), commonly referred to as food stamps. House Republicans have pushed for measures that would increase the number of recipients who must work in order to receive food stamps, including limiting states’ abilities to waive those requirements in areas with poor economies.

The Senate version of the 2018 farm bill thus far does not include these dangerous threats to environmental protections or any changes to the SNAP program — leading some to believe that the House version is unlikely to pass into law.

The Senate version recently passed out of committee and is expected to sail through the full Senate this week. The bipartisan Senate bill also amends a standard setting provision in the Organic Foods Production Act, opening the way to new interpretations of law and broader changes in the conference between the House and Senate.

Beyond Pesticides opposes any provisions in the Farm Bill that amend the standard setting procedures of the federal organic law and believes that no improvements are worth the damage that can be done to the standard setting process and public trust in the organic market and the organic seal in the marketplace. Beyond Pesticides is urging that conferees in House-Senate Farm Bill conference later in the session eliminate amendments that change any aspect of organic standard setting under the Organic Foods Production Act.

This entry was posted on Tuesday, June 26th, 2018 at 12:00 am and is filed under Agriculture, Alternatives/Organics, contamination, Farm Bill, National Politics, Preemption. You can follow any responses to this entry through the RSS 2.0 feed. You can skip to the end and leave a response. Pinging is currently not allowed.