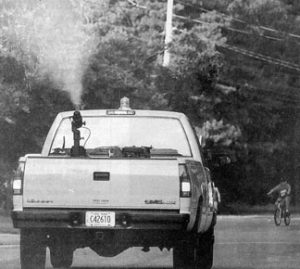 (Beyond Pesticides, September 10 2019)Â Does your community spray toxic pesticides for mosquitoes? In a well-intentioned but ill-informed attempt to prevent mosquito-borne illness such as West Nile virus, many communities spray insecticides (adulticides) designed to kill flying mosquitoes. If your community is one of these, then your public officials need to know that there is a better, more-effective, way to prevent mosquito breeding.

Tell your public officials to stop spraying pesticides and adopt a mosquito management plan that protects public health and the environment.

The problem with mosquito pesticides. Two classes of insecticides are favored by mosquito spray programs â€“organophosphates and synthetic pyrethroids. In order to better target flying mosquitoes, adulticides are generally applied as ultra-low-volume (ULV) formulations that will float in the air longer than usual.

Synthetic pyrethroids, which include resmethrin (Scourge), sumithrin (Anvil), and permethrin are adulticides patterned after pyrethrum (an insecticide derived from chrysanthemum plants), that have been chemically engineered to have greater toxicity and longer breakdown times. Almost all synthetic pyrethroid mosquito products use synergists like piperonyl butoxide (PBO), which increases potency and compromises the body’s ability to detoxify the pesticide. PBO causes a range of short- and long-term effects, including cancer and adverse impacts on liver function and the nervous system.Symptoms of synthetic pyrethroid poisoning include: dermatitis and asthma-like reactions, eye and skin irritation, and flu-like symptoms. Synthetic pyrethroids are endocrine disruptors and have been linked to breast and prostate cancer. People with asthma and pollen allergies should be especially cautious. Exposure has resulted in deaths from respiratory failure. Breakdown times range from a few hours to several months.

In addition to the dangers, adulticiding is usually the least effective mosquito control method.

Preventing the problem. Beyond Pesticides offers resources for managing mosquitoes and mosquito-borne disease without the use of toxic pesticides. A better mosquito management plan protects public health and the environment. There are steps that can be taken to eliminate breeding sites around homes and buildings, and throughout the community. For example:

Tell your public officials to stop spraying pesticides and adopt a mosquito management plan that protects public health and the environment.

This entry was posted on Monday, September 10th, 2018 at 12:00 am and is filed under Mosquitoes, Naled, Take Action, Uncategorized. You can follow any responses to this entry through the RSS 2.0 feed. You can skip to the end and leave a response. Pinging is currently not allowed.