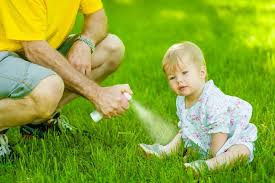 (Beyond Pesticides, November 6, 2018) Scientists working for USDAâ€™s Agricultural Research Service in Lincoln, Nebraska have discovered natural compounds derived from coconut oil that are more effective than DEET at repelling mosquitoes, ticks, biting flies, bed bugs and other insects. Given the long-lasting efficacy of the compounds researchers tested, commercialization could make the regular use of toxic insect repellents, like DEET, obsolete. Advocates are praising USDA researchers for the results, indicating that this is exactly the type of research government agencies should be funding and promoting.

It is important to note that USDA scientists did not find coconut oil itself to be an effective repellent. Lab equipment was used to analyze and isolate medium chain fatty acids within coconut oil for their repellent properties. Scientists zeroed in on a blend of C8 (caprylic acid), C10 (capric acid), and C12 (lauric acid) fatty acids as the most effective repellent mixture. Individually, only C12 exhibited anywhere near the same efficacy as the specific blend identified. The study indicates that more research is needed to understand why coconut oil itself was ineffective, and how the synergy between the fatty acid combinations resulted in such effective repellency.

To verify their hypothesis on the efficacy of the fatty acid blend, scientists tested the compounds on range of well-known pests that threaten public health and the agricultural economy. They began with a focus on biting flies (the stable fly and horn fly), which can reduce meat and milk production in cattle, and spread disease to humans. For the horn fly, researchers formulated the fatty acids in a starch blend and found it effective for up to four days, when used on cattle in the field. Â While the prevailing treatment against stable flies, catnip oil, provided 24 hours of protection, the coconut fatty acid blend showed effectiveness in the lab up to two weeks. Compared to DEET, which provides 50% control against stable flies, the coconut oil compound is 95% effective.

Researchers then looked at the effect of this blend on bed bugs. Both DEET and the fatty acid blend displayed roughly the same effectiveness after 24 hours, but the coconut-derived blend retained efficacy for much longer. After seven days, the coconut fatty acids were still 80% effective against bed bugs, while DEET lost much of its repellent activity after three days.

The dog and lone star ticks tested by scientists exhibited a response similar to bed bugs. The coconut oil blend was found to be nearly 90% effective for both tick species up to seven days. According to EPAâ€™s insect repellent search tool, the longest effective time for a tick repellent currently on the market is the 14 hour protection provided by the picaridin-based Sawyer Picaridin Insect Repellent Lotion. The closest DEET-based product only provides 10 hours of tick repellency.

Scientists last tested their coconut-derived fatty acid blend on Aedes aegypti mosquitoes, which can spread yellow fever, dengue fever, chickungunya, and Zika, and are increasingly prevalent throughout the United States due to a warming climate. While the fatty acid blend was effective at repelling these mosquitoes, the concentrations needed to be much higher than DEET in order to be effective. However, at concentrations above 25%, both substances exhibited the same ability to provide 90% repellency against Aedes aegypti.

It is not an understatement to characterize this research as groundbreaking in its implications for the future development of insect repellents. DEET, which is widely recommended by government agencies and even some well-intentioned non-profit organizations, has been linked to a range of health impacts, with particular concern for children. Â Symptoms of DEET exposure in humans can include headache, exhaustion, and mental confusion, together with blurred vision,Â  salivation, chest tightness, muscle twitching and abdominal cramps. It is often applied to clothing in combination with synthetic pyrethroids, causing potential synergy that has been linked to brain damage and Gulf War syndrome. A 2009 study found a mother’s use of insect repellents, like DEET, during the first trimester of pregnancy to be associated with the birth defect hypospadias in newborns.

Most natural alternatives provide nowhere near the same length of efficacy as that displayed by the fatty acid compounds. The blend that researchers tested are also very cheap to produce and can be isolated through other plant compounds. Researchers estimate that cattle ranchers switching to this formulation could see significant savings on cattle fly repellents, as the cost of the coconut-derived fatty acids would only be roughly 10 cents per cattle.

USDA indicated in a press release that it has filed a patent application for this new technology, and is working with companies to develop formulas that replicate their work. This underlines the critical importance of the U.S. government investing in pest research and technology. As the Agricultural Research Service notes, â€śeach dollar invested in agricultural research results in $20 of economic impact.â€ť This is not government waste, but a successful method to develop new, safer products for the consumer and commercial market. Beyond Pesticides will continue to monitor and update its readers should a coconut-oil fatty acid based natural product be approved for use.

In the meantime, continue to avoid DEET-based products. Currently, given that the efficacy time for natural and least-toxic insect repellents is similar to DEET, there should be no reason to opt for the compound that could put oneâ€™s individual health at risk. See Beyond Pesticidesâ€™ least toxic mosquito repellent fact sheet for more information on safer, alternative repellents. See, also, Beyond Pesticides mosquito management webpage andÂ Public Health Mosquito Management Strategy for Decision.

This entry was posted on Tuesday, November 6th, 2018 at 12:00 am and is filed under DEET, Monsanto, Uncategorized. You can follow any responses to this entry through the RSS 2.0 feed. You can skip to the end and leave a response. Pinging is currently not allowed.