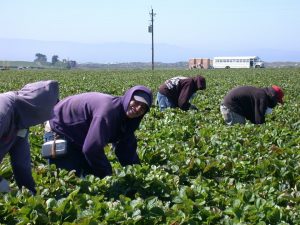 (Beyond Pesticides, April 24, 2019) On April 19, the U.S. Court of Appeals for the 9th Circuit ordered the U.S. Environmental Protection Agency (EPA) to provide a justification for why chlorpyrifos, a neurotoxic insecticide commonly used in agriculture, should remain in the U.S. market. The EPA has 90 days to comply.

Chlorpyrifos has been linked to damaging and often irreversible health outcomes in workers, pregnant women, and children. Low levels of exposure early in life can lead to increased risk of learning disabilities including lowered IQ, developmental delay, and attention deficit/hyperactivity disorder (ADHD). Farmworkers and their children are disproportionately affected by the use of this chemical because they are exposed at work, home, and even at school.

“While we are moving forward, the tragedy is that children are being exposed to chlorpyrifos, a pesticide science has long shown is unsafe,” said Earthjustice Attorney Patti Goldman in a statement. “We hope Trump’s EPA finally decides to protect the future of countless children and the health of millions of farmworkers.”

The battle against chlorpyrifos has been long and drawn out, though there has been significant movement in the last few months. Beyond Pesticides has put together a brief timeline of events:

Momentum is growing for better protection from pesticide use. However, beyond single-pesticide bans, the widespread adoption ofÂ organic managementÂ practices is best for holistic protection of human and environmental health from compounds like chlorpyrifos. Beyond Pesticides has long sought a broad-scale marketplace transition to organic practices, which prohibit the use of all toxic synthetic pesticides.

This entry was posted on Wednesday, April 24th, 2019 at 1:34 am and is filed under ADHD, Agriculture, Children, Chlorpyrifos, Farmworkers, Nervous System Effects, Uncategorized. You can follow any responses to this entry through the RSS 2.0 feed. You can skip to the end and leave a response. Pinging is currently not allowed.