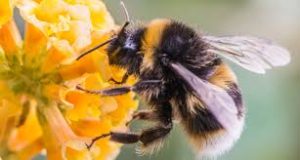 (Beyond Pesticides, April, 30, 2019) According to the latest blog post from pesticide industry propagandist Henry I Miller, the pollinator crisis either a) is not occurring; b) is not a problem; or, c) caused by varroa mites, pathogens, and habitat loss. Notwithstanding outlandish assertions that there is no pollinator crisis, new research is further undermining the long-held industry claim that it is mites and disease alone, and not pesticides that are harming pollinator populations. Published in the journal Scientific Reports by a team of Canadian scientists, this research finds that realistic exposure to neonicotinoid insecticides impairs honey bees ability to groom mites off of their bodies and increases infection with a disease known as deformed wing virus (DWV).

“When bee colonies began to collapse years ago, it became clear there wasn’t just one factor involved, so we were interested in whether there was an interaction between two of the main stressors that affect bees: varroa mites and a neurotoxic insecticide, clothianidin,” said Nuria Morfin Ramirez, PhD, at the University of Guelph, Canada.

Dr. Ramirez and her team exposed honey bees to a range of different concentrations (low, medium, high) of the neonicotinoid clothianidin, with some bees receiving combined stressors of the insecticide and a mite infection. A population unexposed to either mites or the insecticides acted as a control. After exposure, researchers measured grooming intensity, and the number of genome copies of DWV within affected honey beesâ€™ RNA.

At the lowest dose of clothianidin given, there was the steepest decline in the number of grooming bees. This same group also showed increased levels of DWV compared to control bees. When exposed to clothianidin doses in the mid-range of treatment, honey bees showed no changes in their grooming behavior. But when varroa mites were introduced to this same population, grooming levels dropped by 1.4 times.

“This study highlights the importance of reducing stressors that bees are exposed to, to reduce the risk of disease and consequently colony mortality,â€ť said study coauthor Ernesto Guzman, PhD. “What we found was a complicated interaction between the mite and the pesticide that decreased the proportion of bees that groomed intensively, and affected genes associated with neurodegenerative processes,” Dr. Morfin continued.

A 2015 report by the European Academies Science Advisory Council found, â€śSeveral studies have demonstrated synergistic effects of neonicotinoid residues with bee parasites and viruses. Some effects are behavioral (e.g. blocking the ability of bees to sterilize the colony and their food). Others appear related to limiting the immune response leading either to earlier infection or to increased mortality from infection. Very recent work has shown that the limitation of the immune response after exposure to neonicotinoids can promote viral replication, allowing covert infections to become overt. Such effects reduce honey bee survival and increase developmental deformities. In view of the emphasis placed by some reviewers on assigning honey bee losses to diseases and parasites, this is a critical issue.â€ť

Advocates aiming to protect pollinators have never dismissed the devastating losses reported by beekeepers, data on decline in wild bee, monarch, and bird populations, or shied away from the likelihood of synergistic effects from multiple stressors being an important part of the equation in saving pollinators. But there can be no doubt, based on the science accumulated over the last decade and a half, that neonicotinoids, and by extension the broad range of pollinator toxic pesticides, are critical factors in the cause of pollinator declines. Not only that, but compared to a number of other stressors, including climate change and habitat fragmentation, they are one of the most straightforward and achievable to address. After all, these chemicals lack any real monetary benefits for farmers.

But many lawmakers have been comfortable sitting on their hands as the crisis continues to unfold. It is clear that U.S. federal regulators are falling down on the job of protecting the environment, crop pollination, and beneficial insects in general. As a 2016 GAO report found, both the U.S. Department of Agriculture and the Environmental Protection Agency are not doing enough to protect pollinator populations.

We have a chance to address systemic neonicotinoid insecticides, and the broad range of pesticides that harm bees and other pollinators, by joining with lawmakers that understand the magnitude of the crisis. Currently, the Saving Americaâ€™s Pollinatorâ€™s Act has 44 cosponsors committed to reversing pollinator declines. See the list here, and if your Congressional representative isnâ€™t there, make sure to send them a message, and follow up with a phone call to their office. Contact Beyond Pesticides at [email protected] for further assistance on what you can do at the local, state, and federal level to push back against pesticide industry propaganda and protect pollinators for the long term.

This entry was posted on Tuesday, April 30th, 2019 at 12:00 am and is filed under Pollinators, Uncategorized. You can follow any responses to this entry through the RSS 2.0 feed. You can skip to the end and leave a response. Pinging is currently not allowed.