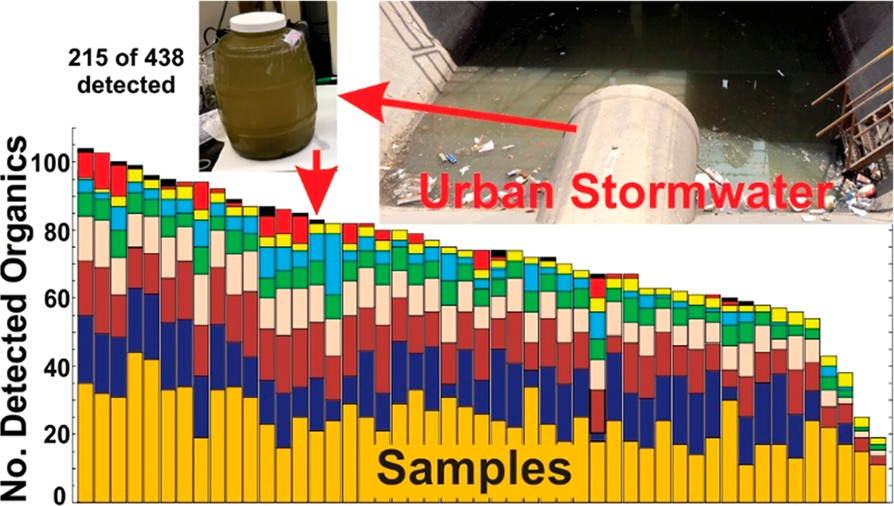 (Beyond Pesticides, September 6, 2019) Heavy rains in urban areas bring together a toxic mixture of man-made chemicals which make their way to waterbodies at levels that can harm aquatic life, according to new research published by a team of scientists from the U.S. Geological Survey (USGS) and the Environmental Protection Agency (EPA). Although U.S. government agencies continue to accurately identify chemical hazards in the everyday environment, precaution and action on these emerging threats has not materialized. In the face of important federal data without subsequent federal action, it is up to states and local communities to regulate the discharge of toxic pesticides and other chemicals that ultimately flow into rivers, lakes, and streams communities rely on for fishing, swimming, and drinking water.

Researchers aimed to provide a national snapshot of the contents of urban stormwater discharge by sampling 21 sites in 17 states over the course of 50 rainfall events. Samples were taken at sites where stormwater is discharged from buildings, parking lots, roads, and other urban landscapes before making its way into ground or surface water. The team tested for 438 different compounds, including pesticides, pharmaceuticals, hormones, and other industrial chemicals.

Nearly 50% (215) of the 438 chemicals tested for were found at least once during the course of the study. Most sites contained 73 or more chemicals per site, with pesticides being the most frequently detected chemical group, accounting for 35% of all detections.

The following chemicals were what the researches deemed â€śpervasive across all samples:â€ť DEET, nicotine, cotinine (nicotine metabolite), caffeine, carbendazim (a metabolite of the pesticide benomyl), methyl-1H-benzotriazole (industrial corrosion inhibitor), creosol (wood preservative), fipronil, bisphenol A (BPA), pluoranthene (polycyclic aromatic hydrocarbon, PAH), and pyrene (PAH). Each of these chemicals were found in over 90% of samples tested.

Although most closely associated with harm to pollinators, fipronil and the neonicotinoid insecticide imidacloprid pose significant risks to aquatic organisms. Health Canada instituted a ban on imidacloprid in response to these concerns. Backing up past data, the present study found imidacloprid to be widespread at levels of significant concern to aquatic life. Nearly 75% of imidacloprid detections exceeded EPAâ€™s benchmark for chronic impacts to aquatic life, while 44% of fipronil samples surpassed this limit.

Researchers also suspect that, due to the frequent detection of pharmaceuticals like metformin (prescribed for diabetes) and acetaminophen, human waste is a component of urban water runoff, resultant from leaking, aging infrastructure. Other notable frequent detections included several industrial PAHs known to cause cancer, polychlorinated biphenyls (PCBs), and highly hazardous pesticides such as the wood preservative pentachlorophenol and long-banned chlordane.

â€śResults indicate that urban stormwater is transporting an extensive mixture of organic contaminants with highly variable individual-component concentrations,â€ť the authors write. Â â€śThe organic chemicals detected in stormwater cause concern for aquatic organisms because many of the chemicals persisting in the environment are known carcinogens (PAHs and PCBs), bioactive (pesticides and pharmaceuticals), or hormonally active (biogenic hormones).â€ť

While some may dismiss the toxic soup flowing out of urban areas as de minimis in amount and thus not a cause for concern, the report specifically notes how the wide range of mixtures detected presents novel risks to health. â€śThe effects from exposure to complex organic and inorganic contaminant mixtures at low concentrations are poorly understood, and a range of potential mixture effects are possible even when each individual chemical is present in a mixture at low concentrations determined not to have individual effects,â€ť the study notes.

While government scientists continue to publish concerning research on the ubiquitous presence of numerous highly hazardous man-made chemicals in the environment, government regulators have yet to take actions that would rein in their use. In their absence, it is critical that local communities fill the gap. Pesticides are a low hanging fruit that can be restricted from use on publicly owned property by local governments. Education campaigns and a sustained fight against state preemption can work to expand these bans to private property. Any amount of source reduction will help in easing the multiple stressors the modern industrialized world is placing on aquatic habitats and drinking water supplies.

Take the pledge to get active in your community, and fight for pesticide reform today. After signing youâ€™ll receive resources to help you make your case to your local leaders. For further assistance, contact Beyond Pesticides at [email protected] or 202-543-5450.Â  And for more information on the threats pesticides pose to US waterways, see Beyond Pesticides Threatened Waters webpage.

This entry was posted on Friday, September 6th, 2019 at 12:00 am and is filed under Uncategorized. You can follow any responses to this entry through the RSS 2.0 feed. You can skip to the end and leave a response. Pinging is currently not allowed.