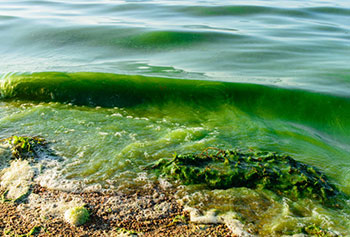 (Beyond Pesticides, October 1, 2019) Commonly used fungicides induce trophic cascades that can lead to the overgrowth of algae, according to research published in the journal Chemosphere. While the current process for regulating pesticides in the U.S. focuses on the acute toxicity of pesticides, and may consider some chronic impacts, real world complexities as described in the current study are not reviewed. This gap in our assessment can lead to significant adverse effects not just on individual species, but entire ecosystems.

Researchers investigated how fungal parasites known as chytrids control the growth of phytoplankton. While some strains of chytrids are notorious for their impact to frog species, some do in fact provide important stopgaps within ecosystems.

“By infecting cyanobacteria, parasitic fungi limit their growth and thus reduce the occurrence and intensity of toxic algal blooms,” says IGB researcher Ramsy Agha, PhD, co-author the study. “Whereas we usually perceive disease as a negative phenomenon, parasites are very important for the normal functioning of aquatic ecosystems and can — as in this case — also have positive effects. Pollution by fungicides can interfere with this natural process,” the researcher adds.

The agricultural fungicides tebuconazole and azoxystrobin were tested on chytrid-infected toxic bloom-forming cyanobacteria in a laboratory setting. A control group was also established to compare effects. At concentrations that are likely to occur in the real world, exposure to both of the fungicides resulted in a significant reduction in infections by the chytrid parasite.

These results indicate that use of the fungicide may be facilitating harmful algae blooms by suppressing fungal pathogens that may otherwise control their growth.

This is not the first time that pesticides have been implicated in harmful algae blooms. A 2008 study published in the journal Nature found that the herbicide atrazine directly killed off free floating algae, which permitted run-away growth of attached algae. In this study, researchers found additional ecosystem-level impacts. The growth in attached algae led to higher populations of snails, a vector for a parasite that can infect amphibians. As a result, more snails, and a higher parasite load led to a higher infection rate in local frog populations, which led to a population decline.

Beyond Pesticides is working to raise awareness of the difficult-to-perceive yet critically important ecosystem-level effects of pesticide use. As we noted with research published last week estimating over 3 billion birds, comprising 30% of the overall US population, lost since 1970, that report was more than a report on birds, it is a report on gnat, caddisfly, and earthworm declines, on species that create the foundation of the food web.

As study co-author Justyna Wolinska, PhD, notes, “As the cultivation and identification of aquatic fungi in scientific labs is continuously improving, risk evaluations should consider the impact of fungicides on aquatic fungi.â€ť There is a need not only to consider the issue raised by the current study, but the wide ranging indirect impacts of pesticide use.

For more information on how pesticide cause affects that impact entire food webs and ecosystems, see Beyond Pesticidesâ€™ article Pesticide Use Harming Key Species Ripples through the Ecosystem.

This entry was posted on Tuesday, October 1st, 2019 at 12:00 am and is filed under Agriculture, Azoxystrobin, Fungicides, tebuconazole, Uncategorized. You can follow any responses to this entry through the RSS 2.0 feed. You can skip to the end and leave a response. Pinging is currently not allowed.