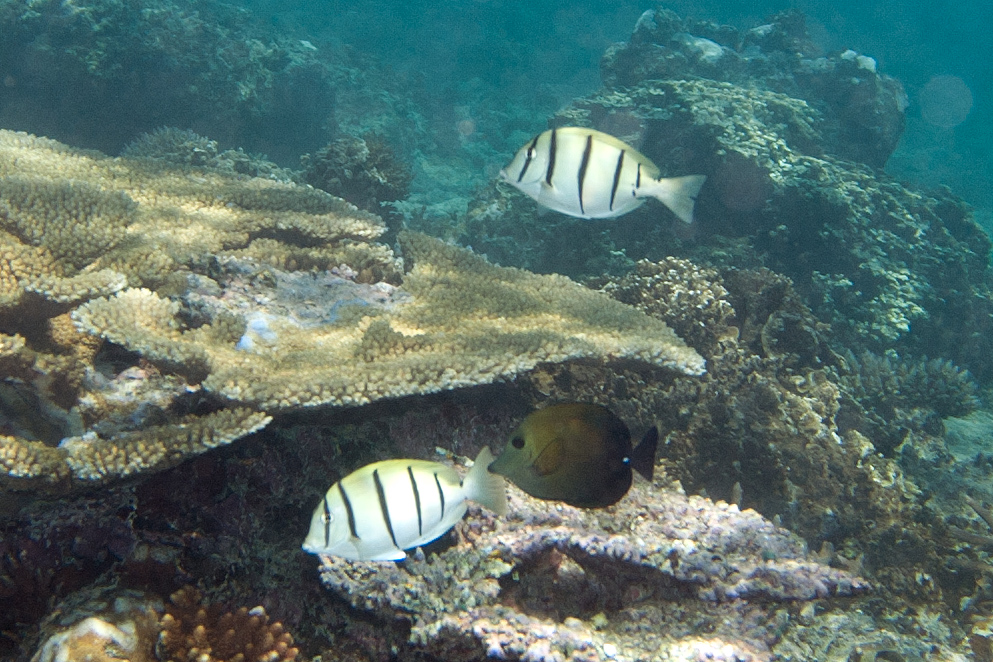 (Beyond Pesticides, July 21, 2020) Climate change and pesticide pollution are known to put coral reef fish at significant risk, but research published in Nature Communications shows how these risks can be both overlapping and synergistic. “Fish face a variety of human-induced stressors including increasing water temperatures and pollution from agricultural pesticides,” says study coauthor William Feeney, PhD from Griffith University. According to researchers, both of these stressors alone harm the endocrine (hormone) system and are subsequently exacerbated in combination with each other.

To study the impact of climate change and pesticide pollution, researchers exposed convict surgeon fish (Acanthurus triostegus) to varying levels of water temperature increases, as well as varying levels of the insecticide chlorpyrifos. The scientists then observed how these changes affected the level of hormones the fish were expressing, and how they acted in the presence of predators.

“Both a three-degree temperature increase and exposure to pesticide led to a decrease in the amount of thyroid hormones in exposed fish,” said Marc Besson, PhD, lead author, from PSL Research University, Paris. “These hormones control the development of sensory structures such as the retina, the nostrils and the lateral line, which enables fish to detect nearby water movement.â€ť

When exposed to stressors during metamorphosis from an egg into a juvenile fish, this can significantly impact a fishâ€™s success in the wild. “This matters because animals use their sensory systems to inform ecologically important behaviours, such as their ability to identify and respond to predators,” said Dr. Feeney.

Interestingly, researchers were able to reverse these harmful impacts by providing the fish with a hormone supplement. “When the fish were given supplementary thyroid hormone it reversed these effects, suggesting that for both temperature stress and pollution stress it is the drop in these hormones which causes changes in the sensory organs and increases their vulnerability to predators,â€ť Dr. Feeney remarked.

To further elucidate impacts, researchers lowered the stressor levels from three to a one-and-a-half-degree temperature increase, and from 30 to 5 parts per billion chlorpyrifos. But researchers exposed fish to both of these lower levels at the same time, rather than separately. Researchers discovered adverse effects similar to or worse than that seen from higher rates of a single stressor.

“This means even exposure to low amounts of temperature change or pollution, which on their own have little to no detectable effect, may disrupt hormone processes when experienced together,” Dr Feeney said. â€śBasically, exposure to multiple stressors, such as climate change and pollution, may be much worse in the developmental stage of coral fish, than exposure to a single stressor alone.â€ť

The study highlights how critical it is to view human-caused stressors holistically, as part of the ecosystems in which they exist. Pesticide regulators in the United States do not consider synergistic impacts between different pesticides, let alone between other anthropogenic stressors like climate change. Adverse effects are viewed through the lens of testing protocols on specific health endpoints that do not adequately capture the complexity of the real world. This myopic thinking perpetuates a regulatory response that permits ongoing destruction to the natural world. Â

Dr. Feeney notes that, â€śThe survival of larval fishes is essential for the renewal of fish stocks and the maintenance of biodiversity more generally. The negative effects of anthropogenic stressors on sensory development in larval fishes that we observed is worrying because it affects a baseline process that underpins entire fish assemblages.”

Indeed, the stakes are high. By failing to consider the environment holistically, we create large blind spots that limit our ability to enact comprehensive change that truly improves ecosystem health. If youâ€™re fed up with regulators that donâ€™t listen to cutting-edge science like this, take action. Support Beyond Pesticides in sending a message to the U.S. Environmental Protection Agency that it must do its job to protect health and the environment.

This entry was posted on Tuesday, July 21st, 2020 at 12:01 am and is filed under Aquatic Organisms, Endocrine Disruption, Uncategorized, Water. You can follow any responses to this entry through the RSS 2.0 feed. You can skip to the end and leave a response. Pinging is currently not allowed.