Ecosystem-Killer Fipronil More Toxic Than Previously Thought, Found in Waterways Throughout the U.S. 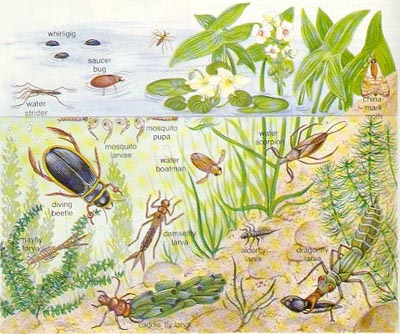 (Beyond Pesticides, October 27, 2020) The insecticide fipronil is more toxic to aquatic insects than previously thought, often present in U.S. waterways, and can trigger trophic cascades that disrupt entire aquatic ecosystems, finds new research published by the U.S. Geological Â Survey (USGS). The data have important implications for waterways throughout the country, but particularly in the Southeast U.S. where the chemical was found at hazardous levels in over half of sampled steams. Despite the high quality of the findings by a U.S. government agency, pesticide regulators at the U.S. Environmental Protection Agency (EPA) do not adequately consider ecosystem-level effects when determining whether to register a pesticide. As a result, without public pressure on the agency, it is unlikely it will follow the science and take the action necessary to rein in use and safeguard the environment.

Fipronil is a systemic pesticide that can travel through plant tissues and be expressed in its pollen, nectar, and dew droplets. Due to its systemic properties and similar toxicity profile, it is often targeted for restriction alongside the notorious neonicotinoid class of insecticides. Although fipronil is equally concerning, there is less data on the range of harm the chemical may cause.

To better understand fipronilâ€™s effects, researchers used varying scientific approaches. Mesocosms, smalls structures containing various plants and animals intended to mimic the natural environment, were set up in a lab. These structures were used to investigate the direct toxicity of fipronil to a range of species, as well as ecosystem-wide effects altered by fipronil contamination. While six stream-mimicking mesocosms were untreated as a control, thirty were dosed at varying levels with either fipronil or one of itâ€™s breakdown materials (metabolites). Scientists then looked at stream monitoring data to determine the real-world hazards the chemical poses in a natural setting.

The mesocosm produced concerning results. Researchers indicate that fipronilâ€™s toxicity was 3 to 2,600 times lower than what has been reported in available literature. Certain species, such as mayfly and stoneflies, were more sensitive than others, such as midges and caddisfly. But, by time the 30 day mesocosm experiment was over, fipronil reduced the overall diversity of species present. The reduction in diversity was found to have a dose-response relationship with fipronil. Meaning, the more fipronil in the mesocosm, the greater the loss in diversity.

The chemical also altered the time it takes for certain species complete metamorphosis. Midges, which start their lives as aquatic invertebrates before metamorphosizing into flying adults, delayed their transition by several days in every mesocosm containing higher concentrations of fipronil.

Beyond direct toxicity, introducing fipronil into the stream mesocosm ecosystem altered food web dynamics, initiating a trophic cascade. A trophic cascade occurs when a disruption, in this case a pesticide, significantly reduces, changes the behavior of, or destroys certain populations of plants and animals, causing effects that ripple up and down the food chain. In this instance, fipronil harmed populations of insects known as scrapers (sometimes known as grazers) which include snails other aquatic insects that feed on algae. This results in a bloom in algae populations. Although fipronil is not a fertilizer, it nonetheless has the potential to indirectly cause harmful algae blooms in U.S. streams and waterways.

Using the data collected, researchers were able to put together a â€śhazard concentrationâ€ť for fipronil that was determined to be protective for 95% of impacted stream species. This hazard concentration was then cross-referenced with data collected on fipronil concentrations in 444 sites throughout the U.S. According to a USGS press release, â€ś18% of the streams sampled nationally had fipronil compound concentrations, averaged over a 4-week sampling period, that exceeded the benign level determined by the mesocosm experiment. In the Southeast, where fipronil was detected more frequently than in the other four regions, 52% of streams sampled had fipronil compound concentrations that exceeded the benign level.â€ť Scientists also saw the dose-response relationship in real time â€“ with stream biodiversity lower when fipronil levels were higher.

Results of this study confirm that the environment would be well-served if those tasked with protecting it were to restrict use of this insecticide. The â€śhazard concentrationâ€ť established by USGS in in this study aligns with recommendations made by Beyond Pesticides in its article on trophic cascades, Pesticide Use Harming Key Species Ripples through the Ecosystem. In it the organization urges the development of a â€śNo Observed Adverse Effect Levelâ€ť for ecosystems, in addition to individual species. Thus, USGS has provided regulators at EPA with a framework for evaluating ecosystem-wide effects; one that should be instituted into our currently pesticide regulatory framework immediately. EPA must require manufacturers to conduct mesocosm experiments on typical aquatic communities, and reject pesticides that cannot establish an adequate safety threshold.

The key lesson learned from this study should not only be that fipronil is harmful and should be banned. There is already ample evidence to make this conclusion. Many other insecticides â€“ including the neonicotinoids, as well as the organophosphate chlorpyrifos, and the synthetic pyrethroid bifenthrin â€“ have been found to cause similar trophic effects in lab mesocosms and the real world. Eliminating fipronil will not reduce the damage these other chemicals cause to aquatic communities. In the long term, the best viable option to ensure healthy ecosystems are systemic changes to the way we allow pesticides to come to market. Changing this fundamental process, by employing cutting edge evaluations like USGS scientists have shown is possible, will ensure long term protection of threatened waters and the wider environment. Â

This entry was posted on Tuesday, October 27th, 2020 at 12:01 am and is filed under Agriculture, Fipronil, U.S. Geological Survey, Uncategorized, Water. You can follow any responses to this entry through the RSS 2.0 feed. You can skip to the end and leave a response. Pinging is currently not allowed.