Endangered Florida Manatees Contaminated with Glyphosate/Roundup Due to Widespread Use 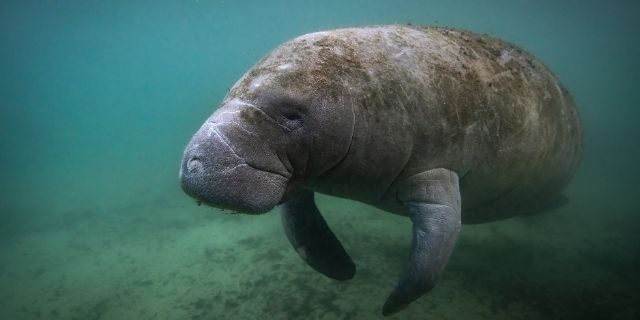 (Beyond Pesticides, March 30, 2021) Florida manatees are experiencing chronic glyphosate exposure that is likely to impact their immune system and make them more susceptible to other environmental stressors such as red tide and cold stress, according to a study published recently in Environment International by a Florida-based team of researchers, led by University of Florida PhD candidate Maite De Maria. Florida manatees, a subpopulation of the West Indian manatee, are listed as threatened under the endangered species act, as populations are under constant threat from human activity in the freshwater ecosystems they rely on. The findings are a call for Florida regulators and lawmakers, particularly communities along the coast, to implement changes in land care practices that eliminate reliance on toxic pesticides like glyphosate.

Researchers collect plasma samples from Florida manatees over the course of a decade, from 2009 to 2019, looking at populations from both sides of the stateâ€™s coast. In addition, eight water bodies in Florida were sampled for the presence of glyphosate three times per year in both 2019 and 2020.

Results found glyphosate in the bodies of 55.8% of Florida manatee samples. Most concerning, the amount of pesticide increased in a straight line over the course of the study. One population, howeverâ€”manatees located closer to the coast of Georgia, did see glyphosate concentrations decline between 2017 and 2019. Scientists found no correlation between the size or sex of the manatee and its glyphosate body burden. The results are unsurprising, given that every test conducted on the water bodies that manatees reside in detected glyphosate contamination.Â

Authors of the study indicate that it is appropriate to consider glyphosate a â€śpseudo-persistentâ€ť pollutant, â€śin which new applications of the herbicide replace the molecules that are being removed,â€ť the study reads. Researchers likewise note that manatees have a number of disadvantages that could increase their exposure. They are alone among marine mammals in that they rely on and drink freshwater, which is more likely to be contaminated. They are also herbivorous, and digest grasses through a process known as hindgut fermentation, whereby microbes help breakdown food in their stomach. This corresponds with a slower digestive process that could result in glyphosate breakdown within the manateeâ€™s stomach, according to researchers.

While manatees may be at particular risk, the ongoing, chronic use of pesticides like glyphosate pose significant threats to all marine mammals. A study published in 2018 found that the genetics of ocean mammals make them more vulnerable to deleterious effects from pesticide exposure. A 2020 study found that dolphins and whales found stranded along the eastern seaboard of the United States are regularly contaminated not only with toxic pesticides, but also plastics, disinfectants, and heavy metals.

The study findings underscore the need to limit the use of glyphosate in farming and landscaping throughout Florida. While sugarcane fields provided an influx of glyphosate loading, it is evident that non-crop uses are also a significant factor in water contamination. In fact, the decline in manatee contamination that researchers observed near the Georgia state line in 2017 likely corresponded with measures put in place by state agencies that placed a hiatus on glyphosate use during the red tide crisis. The study notes that St. Johns River was sprayed with nearly 500 lbs. of glyphosate in 2017, but a mere 11 lbs. in 2018, and in 2019 did not have any applied.

More and more Florida communities are passing restrictions on glyphosate and other toxic pesticides. Key West, Stuart, and Miami have eliminated glyphosate by public agencies. Sarasota and North Miami follow integrated pest management approaches, while South Miami has passed Florida’s first and only organic ordinance, eliminating all toxic pesticide use on public properties. Communities like Oakland Park and Wilton Manors may be close behind, as they pilot organic land care sites. It is possible to manage problematic weeds without resorting to the use of chemicals that harm iconic, endangered species like the Florida Manatee. While the science and alternative practices are available, it will take continued political pressure to move state agencies and elected leaders toward safer approaches. Residents in Florida and throughout the U.S. are encouraged to work with local officials in adopting organic land care policies and practices. For more information on the dangers pesticides pose to wildlife and what you can do to help, see Beyond Pesticides Wildlife program page.Â

This entry was posted on Tuesday, March 30th, 2021 at 12:01 am and is filed under Florida, Georgia, Glyphosate, Uncategorized, Wildlife/Endangered Sp.. You can follow any responses to this entry through the RSS 2.0 feed. You can skip to the end and leave a response. Pinging is currently not allowed.