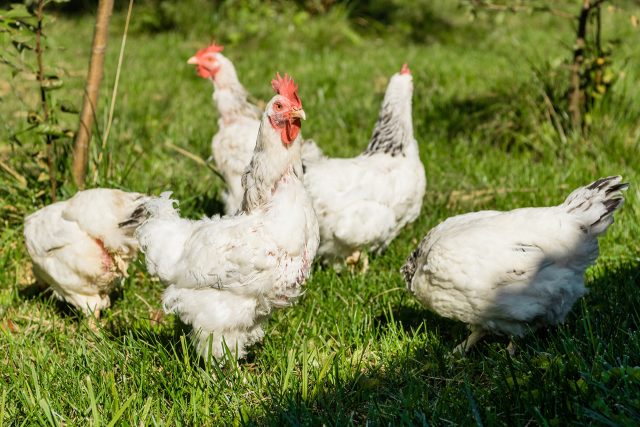 (Beyond Pesticides, May 18, 2021) Organic meat is far less likely to be adulterated with multi-drug resistant bacteria (MDRB) than conventional meat, according a study published earlier this month in Environmental Health Perspectives. The research by experts at John Hopkins Bloomberg School of Public Health is the latest news on the health and safety benefits of choosing organic, which prohibits the regular use of risky antibiotics, for oneâ€™s food purchases. Scientists indicate that contaminated foods pose serious dangers for consumers, public health, and the economy at large. “The presence of pathogenic bacteria is worrisome in and of itself, considering the possible increased risk of contracting foodborne illness,” senior author Meghan Davis, PhD, associate professor at the Bloomberg School said. “If infections turn out to be multidrug resistant, they can be more deadly and more costly to treat.”

To determine the level of contamination in various packaged meats, scientists turned to the National Antimicrobial Resistance Monitoring System (NARMS), a collaborative program between the U.S. Centers for Disease Control and Prevention, the U.S. Food and Drug Administration (FDA), and the U.S. Department of Agriculture. For a five year period spanning 2012-2017, NARMS collected meat products (chicken breast, ground beef, ground turkey, and pork chops) from 19 different U.S. states. Within each state, NARMS selected a random food retailer within 50 miles of their lab and collected 40 samples each month. In sum, 39,349 meat samples were analyzed for the study, encompassing 216 conventional meat processors, 123 processors that split their operations between organic and conventional, and 3 fully organic processing facilities. Roughly 8% of tested samples were organic, while the rest were conventional.

Organic is not safer by chance, but by design. Organic standards, governed by the Organic Foods Production Act of 1990, were crafted with the goal of protecting public health and ecosystem services. Organic standards prohibit the use of antibiotics in poultry after their second day of life, and in mammals after the motherâ€™s third trimester. Organic certified meats are also required to follow a stricter processing protocol, and in split operations organic meats cannot be processed on the same equipment as conventional meats without first undergoing cleaning and disinfecting. Â

In addition to food safety, past studies have found organic meats and other animal products to be more nutrient dense than its conventional counterparts. A 2016 study found 50% higher levels of omega-3 fatty acids and lower concentrations of saturated fat in organic meat when compared to conventional. This is due in large part to the way the animals are raised. Organic livestock are often reared outdoors and provided grass fodder, which have higher levels of healthy omega-3s, as opposed to grains, which have less.

In addition to improved nutrition and lower bacterial loads, organic products contain far fewer amounts of toxic pesticides and other chemicals. A study published in July of last year found that conventional milk contained a range of hazardous materials â€“ from growth hormones, to antibiotics, and pesticides â€“ that are not found in organic milks.

Time and time again, studies have found that switching from a mostly conventional to all organic diet makes significant changes in the amount of pesticides one is exposed to. Thatâ€™s because organic agriculture doesnâ€™t allow any toxic synthetic pesticides to be used on certified organic foods.

But organic isnâ€™t perfect. Watchdog organizations have cited many organic producers for conditions similar to those seen in â€˜factory farmsâ€™ under conventional production practices. There are also concerns over USDAâ€™s rulemaking backlog, which have delayed the implementation of regulations that would improve the public and ecological health profile of organic practices. Â

Despite these shortcomings, organic remains far and beyond the better choice over conventionally produced foods. Organic standards are crafted with input from organic consumers and other stakeholders, and intended to be continuously improved upon. Thatâ€™s why itâ€™s critical for consumers to stay engaged in the rulemaking process. Raise your voice as an organic consumer by letting USDA know it must follow and implement the recommendations of the expert, independent National Organic Standards Board in order to maintain organic integrity. For more ways that you can get involved in protecting and improving organic practices, see Beyond Pesticides Keeping Organic Strong program page.

This entry was posted on Tuesday, May 18th, 2021 at 12:01 am and is filed under Agriculture, Alternatives/Organics, Antibiotic Resistance, Centers for Disease Control and Prevention, Environmental Protection Agency (EPA), Food and Drug Administration (FDA), Resistance, Uncategorized, US Department of Agriculture (USDA). You can follow any responses to this entry through the RSS 2.0 feed. You can skip to the end and leave a response. Pinging is currently not allowed.