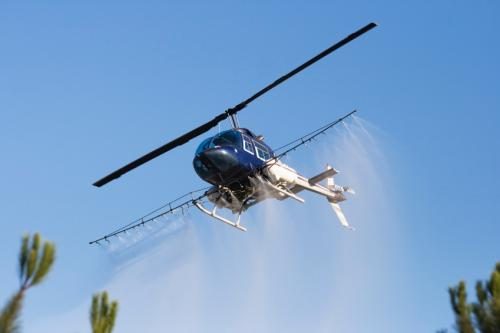 (Beyond Pesticides, June 22, 2021) Glyphosate herbicide use in forested areas persists in the environment for years and can prompt morphological changes in perennial flowers that reduce their fertility and may make them less attractive to pollinators. These findings were published this month in the journal Frontiers in Plant Science by researchers at the University of British Columbia, who hope that their work will inform safer approaches to forest management. “The more we learn the better, and research can always be used to better inform management,” said lead author Lisa Wood, PhD. “Herbicide practices may change, if the research shows that this is in the public’s best interest.”

Glyphosate herbicides like Roundup and Visionmax (a Canada-registered glyphosate product produced by Bayer/Monsanto) are often applied aerially via helicopter on wide swaths of forest land known as cutblocks. Cutblocks, designated areas where coniferous trees are grown for harvest and processing, are doused with glyphosate in order to manage understory trees and shrubs that would compete with the conifers. Researchers set out to understand the nontarget impacts of this practice on the surrounding forest ecosystem.

Wild prickly rose (Rosa acicularis) plants were collected from three different cutblocks, each sprayed with Visionmax according to label directions. A set of untreated plants were gathered outside of the cutblock to function as a control. Researchers also tested the impact of glyphosate on wild rose plants in a more controlled setting by establishing them in a greenhouse. Half of these potted plants were sprayed with glyphosate, while the rest acted as a control. A range of measurements were taken on the flowers and pollen.

The scientists found that wild prickly rose plants sprayed with glyphosate had the viability of their pollen reduced by 66% when compared to the control group. The anthers on the rose, which together with the filament comprise the male portion of a flower that produces pollen, failed to open in 30% of glyphosate treated plants. The results were similar in the greenhouse experiment, where 51% of pollen from treated plants were less viable than the control, and 25% of anthers failed to open.

While some morphological changes are expected given exposure to a highly toxic herbicide, what concerns scientists the most is how long the chemicalâ€™s effects persisted in the environment. In contrast to claims by agrichemical corporations that glyphosate breaks down quickly in the environment, wild prickly roses contained traces of the herbicide two years after initial exposure. “The changes to plants have been documented in the past, in agricultural plants, so it is not surprising to find them in forests,” said Dr. Wood. “What is important is the timeline. To continue to find these effects one to two years after herbicide applications, in new parts of growing plants, is noteworthy.”

Rose flowers experienced a range of other alterations that could impact their chance of being pollinated. While most R. acicularis flowers are heart-shaped, just over 1 in 10 that were sprayed with glyphosate were heart-shaped. Likewise, most rose flowers are medium or dark pink, but in both the greenhouse and in the wild, those sprayed with glyphosate were more likely to be either white or brown. Researchers indicate that this phenomenon could change the interaction between pollinators and their propensity to pollinate malformed or discolored flowers.

As a result of current findings, the next round of investigation Dr. Wood will take on concerns how herbicide-induced changes within these plants could impact pollinators. Her team will be testing for residues in the feces of insects and hummingbirds. “This will tell us if pollinators are taking up residues from the plants they feed on,” she explained. “We will also research other plants to see if the changes we observed in the wild rose are also found in other flowers.”

Wild prickly rose is found growing primarily in boreal forests in North America. It has an extensive history of use within indigenous societies, as many parts of the plant are used for medicine and food. Dr. Woodâ€™s research over the last decade has focused on the interaction between industrial forestry operations and the impact on indigenous natural resources. This effort was based on input and requests from Canadian indigenous First Nations communities. Back in 2013, shrubs foraged by traditional berry-pickers in northeastern British Columbia were sampled and found to contain glyphosate residues, leading to the need for a broader investigation. Her prior work found that glyphosate use in forestry operations drifts onto wild edible nontarget plants like raspberries and blueberries, which can then remain contaminated with the chemical for more than a year, after a single application.

Glyphosateâ€™s use places public health and ecosystem stability at grave risk. Itâ€™s systemic properties, long touted by industry its ability to kill roots, appears to be limited to tender annuals. Woodier, perennial plants with deep root systems appear to translocate the chemical into their root system, where it can continuously contaminate the pollen, flowers, and fruit of the plant. Despite acknowledgement by the U.S. Environmental Protection Agency that glyphosate use threatens the environment and nearly all endangered species, glyphosate use continues unabated in forestry, agriculture, and neighborhoods throughout America. Â

Make this week â€“ Pollinator Week 2021â€“ the week you begin to shift the tide in favor of environmental health and well-being. Beyond Pesticides has three major actions weâ€™re asking supporters to take:

Stemming the tide of pesticide contamination, and protecting pollinators and public health takes both individual and collective actions. For more information on what you can do to stop toxic glyphosate use and help pollinator populations recover see Beyond Pesticides Tools for Change and Bee Protective webpages.

This entry was posted on Tuesday, June 22nd, 2021 at 12:01 am and is filed under Environmental Protection Agency (EPA), Forestry, Glyphosate, Uncategorized. You can follow any responses to this entry through the RSS 2.0 feed. You can skip to the end and leave a response. Pinging is currently not allowed.