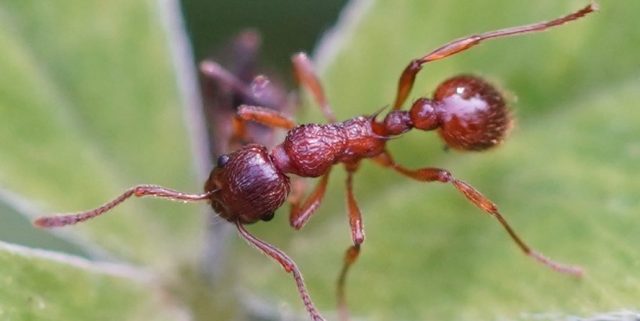 (Beyond Pesticides, August 3, 2021) Research published this summer in the journal iScience outlines a promising, pesticide-free approach to manage non-native fire ants that have invaded many coastal communities along the eastern United States. As unabated climate change rapidly warms the planet, shifting wildlife habitat, and increasing the rate of intense storms and other natural disasters, pest insects like the fire ant are finding favorable conditions for their expansion into new areas. With pressure growing on land managers to resort to highly toxic pesticides to manage stinging and biting pests, it is increasingly important to invest in and emphasize new biological-based approaches.

Scientists from the University of Maine focused in on a strain of fire ants known as Myrmica rubra, native to Europe and Asia and commonly known as the European fire ant. The ant is highly aggressive, attacking humans or other animals when disturbed, and boasts a powerful sting. In Europe, the ant plays an ecological role in conserving an endangered species of Maculinea sp. butterflies. The butterfly larvae send out chemical signals that mimic a queen ant, and the fire ants take the larvae into their nest. There, the larvae are protected from predators, and often are provisioned by or feed on ants in the colony. However, in the US, there is no similar ecological role for the ants to play, making them a troubling hazard for those wishing to enjoy the outdoors peacefully. M. rubra fire ants were first discovered in the US in the early 1900s, but have increased significantly over the last 100 years, and rapidly over the last two decades as climate change creates more favorable habitat conditions.

During surveys of ant populations along the Maine coast, researchers noticed that many of the dead ants dissected in the lab contained a nematode known as Pristionchus entomophagus. P. entomophagus is a necromenic nematode â€“ it enters its host while the host is alive, and then remains in stasis until the host dies, at which time it begins its reproductive cycle. While scientists indicate P. entomophagus nematodes may be trending towards parasitism from an evolutionary standpoint, they currently feed on a range of bacteria and are not specifically selecting for bacteria that would kill off the ants. Thus, scientists set out to understand what bacteria the nematodes may be picking up before making a home in the fire antsâ€™ body.

European fire ants were collected from colonies in coastal Maine where high ant mortality was observed. Scientists then cultured the bacteria found on nematodes that emerged from dead ants. They noticed that while adult nematodes concentrated most bacteria in their digestive tract, juvenile nematodes had more bacteria on their cuticle (skin) layer. It was hypothesized that the transfer of pathogenic bacteria is more likely with juveniles carrying the bacteria on the outside of their bodies. Â

To test mortality, nematodes were fed fluorescent bacteria and used to infect wax moth larvae (Galleria mellonella). Two genus of bacterium – Serratia and Pseudomonas â€“ were identified as causative candidates. While neither were able to be transferred and successfully kill off the wax moths, there may be other factors at play, including specific local environmental conditions. “The problem with using bacteria as a mode of biological control is that they don’t always act the way you want them toâ€”sometimes they are uncooperative team members,” said study coauthor Sue Ishaq, PhD. “There is a lot of research left before nematode transmission of bacteria could be used as biological control against ants, but it remains an intriguing possibility.â€ť

Scientists remain hopeful that their work could eventually result in a commercially relevant approach for managing fire ants. â€śThe use of an engineered biological control against invasive ant species, such as nematodes carrying specifically seeded bacterial species, is highly desirable, especially if the pathogenic bacteria are normally found in soil ecosystems and represents a low risk for biosafety control,â€ť the study reads.

While biocontrol research continues, there are non-toxic and less toxic approaches that can help address current fire ant problems in homes and communities. Beyond Pesticides ManageSafe entry for Fire Ants provides a brief identification and overview, preventative practices to avoid fire ant infestations, monitoring and record-keeping advice, non-chemical and mechanical control options, and least toxic chemical options that can be used as a last resort. No single approach â€“ even one that includes toxic pesticides – will be a silver bullet for fire ant problems, necessitating the integration of multiple tactics in order to avert fire ant stings and bites that can affect your family, pets, and neighbors. Â

For more information on least toxic management of common pests around the home and garden, see Beyond Pesticidesâ€™ ManageSafe tool.

This entry was posted on Tuesday, August 3rd, 2021 at 12:01 am and is filed under Uncategorized. You can follow any responses to this entry through the RSS 2.0 feed. You can skip to the end and leave a response. Pinging is currently not allowed.