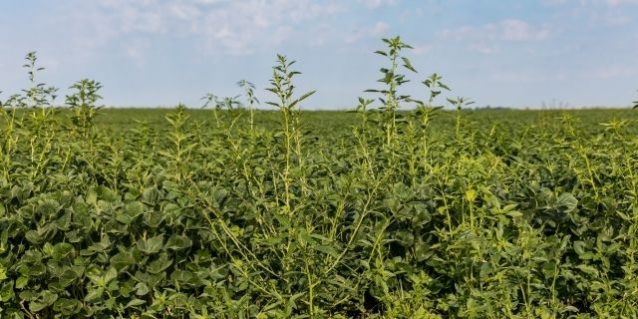 (Beyond Pesticides, October 13, 2021) Pesticide use in conventional chemical-intensive farming is so pervasive that weeds are developing resistance to herbicides they have never encountered before. According to research published in Plant and Cell Physiology and New Phytologist, the notoriously difficult-to-control weed waterhemp (Amaranthus tuberculatus) is outpacing commercial crops in its ability to detoxify after herbicide exposure. “This is probably the first known example where waterhemp has evolved a detox mechanism that a crop doesn’t have. It’s using a completely different mechanism, adding to the complexity of controlling this weed,” says Dean Riechers, PhD, study co-author and professor at University of Illinois.

Researchers found waterhemp resistant to the chemical syncarpic acid-3 (SA3). SA3 is one of the earliest versions of a 4-Hydroxyphenylpyruvate dioxygenase (HPPD) inhibiting herbicide. HPPD inhibiting herbicides, which include herbicides like isoxaflutole and mesotrione, are selective (ie plant-specific) and break down amino acids that are required for plant growth and development. Corn generally tolerates HPPD-inhibiting chemicals, detoxifying them through different channels depending upon the specific type of HPPD herbicide. Weeds that grow in and around corn fields where these chemicals are regularly sprayed, like waterhemp, have likewise evolved the ability to detoxify HPPD-inhibitors, mostly mimicking the process that corn uses.

However, the current research finds that waterhemp has the ability to detoxify SA3, which corn cannot withstand. Analysis conducted by the University of Illinois scientists determined that waterhemp developed a process completely novel and separate from how corn detoxifies the compounds. While it is usually the Cytochromes P450 enzymes that breakdown hazardous molecules, waterhemp used different enzymes called glutathione S-transferases (GSTs). Instead of breaking down the hazardous substance, waterhemp added electrons to SA3 to dilute the toxicity of the substance. “It’s surprising because not only did the phase-one reactions not proceed as expected, we didn’t even anticipate GSTs to be involved for this class of herbicides,ŌĆØ said study coauthor Crystal Concepcion, PhD. ŌĆ£We don’t see corn preparing chemicals for attack by GSTs. This is very, very rare for herbicides.”

With this novel detoxification process, researchers indicate that waterhemp is likely immune to herbicides it has not yet encountered, and possibly even those that havenŌĆÖt yet been developed.

The research team was thrown through another loop with waterhemp when it began looking at how it detoxifies other herbicides, particular S-metolachlor, another selective herbicide that is often drenched over soil as a pre-emergent, prior to planting. In this instance, the script was flipped again. Corn, soy and other row crops in this instance employ GSTs to detoxify S-metolachlor. However, while waterhemp did display GST activity, activity of the cytochrome p450 enzymes were 20 fold higher what was found in corn crops or waterhemp plants that were otherwise sensitive to the toxic effects of S-metolachlor. “In this case, we were thinking it was GSTs all the way. But the data told us otherwise. The metabolomics approach we took informed us that GSTs are not the main mechanism to detoxify S-metolachlor in resistant waterhemp. It’s actually p450s,” said Dr. Riechers, who participated in both studies.

Waterhemp is a particularly virulent weed. However, it is not invasive ŌĆō it is native to the central U.S., and waterhemp was not even a problem for farmers until the early 1990s. Iowa State University points to larger farm sizes, reduced tillage, increased herbicide use, and potentially a hybridized waterhemp species as the culprits, leaving room for some yet ŌĆ£still unknownŌĆØ factor. However, it is increasingly clear that herbicide use is the prevailing driver of the ever-evolving adaptability of waterhemp plants.

A study published in 2018 found waterhemp in the Midwest to be resistant to six different herbicides from multiple different classes, including mesotrione, ┬Ā2,4-D, atrazine, chlorimuron, fomesafen, and glyphosate. In response to widespread herbicide resistance, the US Environmental Protection Agency, the pesticide industry, and unfortunately, even the authors of the present study, discuss the problem in the context of finding new chemical classes or mechanisms that will not elicit weed resistance, while allowing the factors that constitute the source of the problem to continue.

A observant study published in 2018 laid out the solution clearly: the best method to reduce herbicide resistance in target weeds is to reduce the overall use of herbicides. Looking at black-grass, a highly adaptable weed found throughout England, researchers tried mixing and rotating herbicides, as well as crop rotation, but the only factor that corresponded with the prevalence of resistant weeds with the amount of herbicide used. Similar patterns have emerged in other chemical-dependent cropping systems. In 2013, researchers found evidence that ŌĆ£stackingŌĆØ multiple insecticides within insecticide-incorporated genetically engineered (GE) crops increases both the likelihood and speed at which target pests develop resistance.

With EPA guidance suggesting rotating and tank mixing different highly toxic herbicides as methods to ŌĆ£delayŌĆØ the onset of resistance with a focus on ŌĆ£preserving the useful life of pesticides,ŌĆØ it is little wonder that research is finding that humans are surpassing ŌĆśplanetary boundariesŌĆÖ for resistance. According to a 2018 review, surpassing these boundaries means that civilization cannot continue to rely on the biocides for the same purposes and expect the same outcome. The problems are most pronounced in the realm of drug-resistant antibiotics (which it must be noted, are likely exacerbated by herbicide use), but increasingly noted in conventional and GE agriculture.

Addressing resistance is agriculture requires an approach that embraces natural processes and biological diversity, rather than simplifying the landscape through chemical controls. Stopping herbicide use is the right step, but it must be done in a way that accounts for why herbicides were being used in the first place. Large monoculture cropping systems are a drain against biodiversity and soil health, whereas those that embrace variety within landscape and crop plantings produce higher yields. ┬Ā

Organic agriculture provides a framework for this shift in thinking. By eschewing harsh synthetic pesticides and fertilizers, and requiring farmers to maintain soil health, organic incentivizes growers to employ natural, nontoxic and biologically based management techniques to bring balance between pest, predator, and crop protection in a landscape. ┬ĀFor background and more information on the dangers of pesticide resistance, see this Pesticide Resistance article in Pesticides and You, and visit Beyond Pesticides insecticide and herbicide tolerant GE crop pages.

This entry was posted on Wednesday, October 13th, 2021 at 12:01 am and is filed under Uncategorized. You can follow any responses to this entry through the RSS 2.0 feed. You can skip to the end and leave a response. Pinging is currently not allowed.