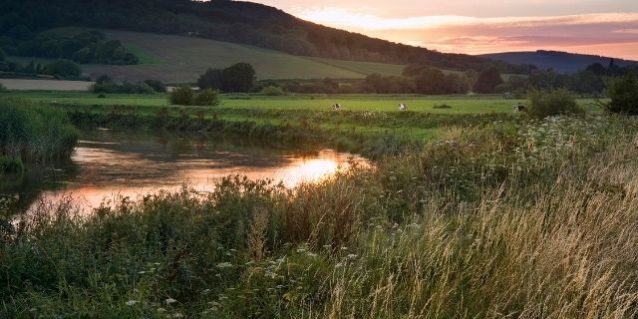 (Beyond Pesticides, November 10, 2021) The diversity and abundance of freshwater aquatic insects plunges when commonly used neonicotinoid (neonic) insecticides leach into waterways, finds research published in the Proceedings of the National Academy of Sciences this month. While this is the latest study exploring the effects of neonicotinoids in the field at real-world exposure levels, it is far from the first to show unacceptable hazards to wildlife and ecological health. As research on neonics piles up, advocates are watching in dismay as regulators at the Environmental Protection Agency (EPA) fail to respond to the science and allow indiscriminate poisoning to continue.

To determine how neonicotinoids affect critical aquatic species near the bottom of the food chain, researchers created a series of 36 experimental ditches, split into four groups of nine. One group acted as a control and received no pesticide, and each other group received, 0.1, 1.0, or 10 parts per billion (ppb) of the thiacloprid, a neonic insecticide often cited by industry and regulators as having lower toxicity concerns than other neonicotinoids. Mimicking a pulse that may come from a nearby insecticide application, each group of ditches was dosed every two weeks for a period of three months.

Scientists collected over 55,000 insects over the course of the experiment. However, overall abundance, biomass, and diversity of insects collected declined in dosed ditches over the three-month period. By the end of the study, compared to the control group overall insect biomass declined by 11, 4, and 50% along a gradient of increasing amounts of neonic dosing. Diptera, the large order of flies, accounted for the bulk of biomass declines. Within one order of Diptera known as Chironomidae midges, populations crashed from an initial identification of 29 species down to a single species in the highest dosed ditches.

A range of other aquatic insects were also harmed. Coleoptera beetles declined by over 90% at the highest dose and 61% at 1ppb, though were not significantly impacted at the lowest concentration. Similar results were seen for Odonata dragonflies and Trichoptera caddisflies. At the highest thiacloprid concentration, Ephemeroptera Mayflies declined by 98% compared to the control.

“We saw dramatic declines in all the species groups studied, such as dragonflies, beetles and sedges,â€ť said study author Henrik Barmentlo, PhD, both in absolute numbers and in total biomass. â€śIn the most extreme scenario, the diversity of the most species-rich group, the dance flies, even dropped to a single species.” Dr. Barmentlo notes that these effects have major trophic impacts for other wildlife, like birds that rely upon these insects. “So it is quite possible that these bird species suffer from a lack of insects, or in other words: food,â€ť he said. Amphibians are likely to feel the full effect of neonicotinoid contamination, as are not only exposed through water, but also rely upon a healthy insect population for sustenance. A 2017 study found that neonicotinoid exposure can delay metamorphosis in exposed wood frogs.

The results of the study are damning for U.S. waterways, where neonicotinoids are nearly everywhere. A 2015 study found the chemicals in half of U.S. streams. Research published in 2018 determined that neonicotinoids persist year-round in the Great Lakes, with ambient levels sampled as high as .6ppb. Water treatment plants are not often prepared to filter out this contamination, which can become increasingly complex as it breaks down in waterways. A 2019 study found the metabolites of the neonicotinoid imidacloprid, desnitro-imidacloprid and imidacloprid-urea, in drinking water. Despite being the degradation products of the original insecticide, these metabolites can still be toxicologically active and harm human and environmental health.

“Given the urgency of the large-scale decline in insects, we think the mass use of these insecticides should be reconsidered. In the EU, the use of thiacloprid was banned last year, but not yet in other parts of the world. In order to protect freshwater insects and all the life that depends on them, we must stop using these [neonicotinoids] as soon as possible,â€ť said Dr. Bartmentlo.

While the EU has acted to eliminate the neonicotinoids, in the U.S., advocates are taking pains just to make the Environmental Protection Agency evaluate their effects on endangered species, and protect these speciesâ€™ declining populations and habitat. It is clear that EPAâ€™s Office of Pesticide Programs has failed, trading a mission of environmental protection for a revolving door of industry profits. But it will take concreted efforts from an engaged public and elected officials to make changes that ensure the agency lives up to its namesake. Take action by joining with 37 organizations seeking major reforms in the Office of Pesticide Programs (OPP). And for more information on the dangers neonics pose to aquatic organisms, see Beyond Pesticides Poisoned Waterways report.

This entry was posted on Wednesday, November 10th, 2021 at 12:01 am and is filed under Environmental Protection Agency (EPA), neonicotinoids, Pollinators, Uncategorized. You can follow any responses to this entry through the RSS 2.0 feed. You can skip to the end and leave a response. Pinging is currently not allowed.