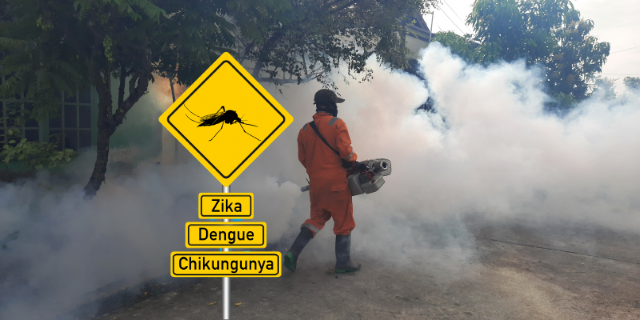 (Beyond Pesticides, November 16, 2021) Populations of disease-carrying mosquitoes are higher in urban areas of lower socioeconomic status, according to research published this year in the Journal of Urban Ecology. With insect-borne diseases on the rise due to a rapidly changing climate, it is critical to highlight disease patterns and target aid to communities at greatest risk. While pesticide use is often the knee-jerk reaction to high mosquito populations, it is critical not to compound health risks through toxic chemical use. The factors that lead to higher rates of disease-carrying mosquitoes can be remedied through considerate planning and targeted, consistent investment in sustainable infrastructure.

To determine the prevalence of mosquito populations, in particular populations of disease-carrying Aedes aegypti, along a gradient of socioeconomic status, researchers began their work in San Juan, Puerto Rico. Eight neighborhoods across the region were categorized based on socioeconomic factors such as household income, population density, health coverage, unemployment level, education, and the amount of trash and abandoned homes in the area. Â Mosquitoes were sampled from October 2018 to May 2019, using six mosquito traps per neighborhood.

A total of over 12,000 mosquitoes were trapped over the course of the study, with nearly 90% of traps finding Culex quinquefasciatus, and roughly 12% being Aedes egypti. Both mosquitoes have the ability to transmit disease. While C. quinquefasciatus is known for its ability to spread West Nile, Zika, and eastern equine encephalitis, Ae. egypti can transmit yellow fever, chickungunya, Zika, and dengue.

Researchers note that although population density is higher in neighborhoods with lower socioeconomic status, it is the resulting physical and structural differences between the neighborhoods that are the biggest contributors. The human built environment in lower income areas are more likely to have infrastructure that is poorly maintained, with more litter and stagnant water in the streets due to lack of sanitation services and a functioning drainage system. It was noted that two of the lowest socioeconomic status neighborhoods flooded multiple times during the course of research. All of these factors increase larval mosquito habitat and subsequently the risk of mosquito borne disease.

While some may conclude that the answer is simply to target more mosquito control methods towards lower income neighborhoods, that decision belies data from higher socioeconomic status neighborhoods. The way humans alter the environment inherently attracts mosquitoes that are already attracted to humans as a source of food. Comparing natural landscapes to human built environments, mosquito abundance increases by an average of 2.9 times, according to recent studies. It follows that within an environment already catered to its needs, mosquitoes will thrive in areas that provide the most ideal conditions.

To remedy the disparities in mosquito abundance and disease prevalence, policies are needed to target investments toward improving physical infrastructure, bringing trash and sanitation services to underserved communities, and focusing on other measures that manipulate the potential habitat of disease-carrying mosquitoes. This approach is likely most helpful, but not limited to low socioeconomic communities â€“ emphasizing non-chemical management of insect born disease should always be the first consideration. After these factors are addressed, there may be a role for the judicious use of biological based larvicides like bacillus thuringiensis, but mosquito adulticing should almost never be necessary, and only conducted when there is a sustained presence of a disease vector and buy-in from the surrounding community. Ae. egypti mosquitoes are rapidly evolving resistance to commonly used pyrethroid insecticides, underlining the need for residents of every socioeconomic status to focus on personal protective measures, like mosquito-proof clothing and natural repellents.

This entry was posted on Tuesday, November 16th, 2021 at 12:01 am and is filed under Mosquitoes, Repellent, Uncategorized. You can follow any responses to this entry through the RSS 2.0 feed. You can skip to the end and leave a response. Pinging is currently not allowed.